Hotel quarantine has been in the news lately. Returned travellers post videos of themselves locked in their rooms and speak of their claustrophobia and their struggles with mental health.

Spare a thought, then, for some 60 men who have been locked up in a Melbourne hotel for more than a year. 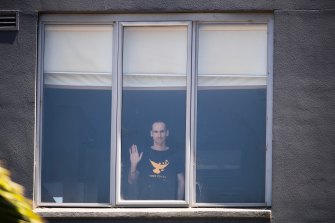 On Friday, Mostafa (Moz) Azimitabar will mark his 13th month locked in a secure floor at the Mantra Hotel, in Bell Street, Preston.

From the street, passersby can see men at the third-floor windows of the nondescript hotel's small rooms. The men are allowed out of their rooms to visit a kitchen on the same floor, and to play ping pong in a common area. After more than a year contained to the third floor, most are now too depressed to play games; spending most of their times in their rooms.

"My life is exactly the size of a room, and a narrow corridor," Mr Azimitabar said.

"And inside my room, I feel I am like a fish inside an aquarium … The whole of my life is this window to see the real life, where people are driving, walking; when they wave at us. And when I wave back at them. This is my life."

To mark World Human Rights day on Thursday, broadcaster, refugee rights campaigner and former Socceroo Craig Foster travelled from NSW to visit his friend Mr Azimitabar at the Mantra. It was his first visit since before the coronavirus pandemic swept the world.

The experience moved him deeply, and sparked an unwavering commitment to having the men – most of whom have been found to be refugees – freed. 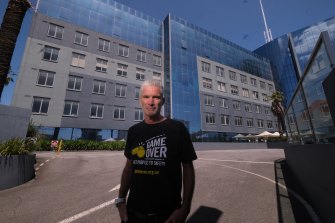 Former Socceroo Craig Foster was in Melbourne on Thursday to visit his friend Mostafa Azimitabar at the Mantra Hotel in Preston.Credit:Luis Enrique Ascui

"But equally, my job is to take this issue beyond that and out to broader Australia. That's the value of playing for the Socceroos, I want to talk to every Australian. We need everyday Australians."

Since Foster's visit to Port Moresby, dozens of men medically evacuated to Australia have entered a new form of detention, unable to leave hotels transformed into "alternative places of detention".

Foster told The Age Mr Azimitabar had been visibly distressed at the start of their meeting on Thursday, in which the men were separated by a transparent plastic barrier. Despite the security precautions, guards patted down Mr Azimitabar before the visit.

"And so what he's saying is, 'well, we're in a hotel, we can't go anywhere'," Foster said. "'Everything's prohibited. Nothing can get in, people can't send us things, and therefore, what can I possibly have that means I have to have a pat down search?'

The Department of Border Force says people without Australian citizenship, or a valid visa, are liable for detention and removal from Australia.

It says the placement of a detainee in an alternative place of detention comes with "a rigorous risk assessment" to ensure the safety and security of detainees, staff and the broader community, and detainees have access to health and welfare services and visits.

Amnesty International and 60 other groups were due to hold a candlelight vigil outside Mantra at 8pm on Thursday, to mark World Human Rights Day.