Home » World News » The N.B.A.’s halftime performers feel the strain of the pandemic. 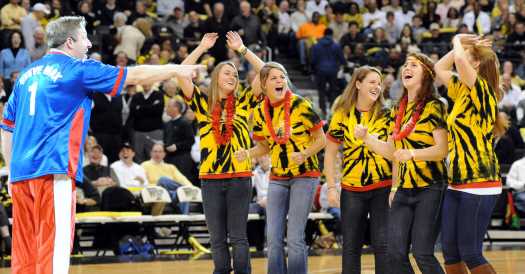 Steve Max usually spends his winters telling big crowds at basketball arenas to put their hands up and to touch their shoulders and to cover their eyes. He travels the country entertaining fans at halftime.

Or at least that was his line of work until March, when the pandemic emptied arenas and rendered his microphone silent.

Though a few N.B.A. teams began the season with limited numbers of spectators — and some are allowing their dance teams to perform in the aisles — none are hiring halftime entertainers. Contortionists, acrobats, Frisbee-catching dogs — they are all biding their time, waiting for the show to go on.

Beyond the financial impact — halftime entertainers typically make $1,500 to $5,000 a show — the effects of the pandemic have been felt within their community. David Maas, who had a popular act called Quick Change with his wife, Dania Kaseeva, died of Covid-19 in November.

“My heart goes out to all my friends who are in this business,” said Jon Terry, a booking agent for halftime performers who is based in Oklahoma. “These are creative people, and in many cases, it’s their sole income. Some of these guys were making six-figure incomes.”

And they all can recall in vivid detail the day that everything changed.

On March 11, Simon Arestov and Lyric Wallenda Arestov, who are both 36, were at home in Sarasota, Fla., preparing to travel to New York so they could perform at the Big East Conference men’s basketball tournament.

But that night, Rudy Gobert of the Utah Jazz tested positive for the coronavirus before a game against the Oklahoma City Thunder. The tournament was soon canceled.

At the time, the couple had a long list of N.B.A. halftimes lined up for the rest of the season. They were also planning to bounce among festivals and circuses during the summer. On average, they do about 400 shows a year.

Since March, the couple has performed four times. Their return came in September at the Juniata County Fair in Port Royal, Pa. They both cried.

“I forgot what it was like to be in front of an audience,” Mr. Arestov said.