In the midst of a global reckoning over sexual violence, a woman who was forced into sexual slavery by the Islamic State and a Congolese gynecological surgeon were awarded the Nobel Peace Prize on Friday for their campaigns to end the use of mass rape as a weapon of war.

The award went to Nadia Murad, 25, who became the voice and face of women who survived sexual violence by the Islamic State, and to Dr Denis Mukwege, 63, who has treated thousands of women in a country once called the rape capital of the world.

They have worked through grave risks to their own lives to help survivors and to bring their stories to the world.

Berit Reiss-Andersen, chairwoman of the Norwegian Nobel Committee, said, "We want to send out a message of awareness that women, who constitute half of the population in most communities, actually are used as a weapon of war, and that they need protection and that the perpetrators have to be prosecuted and held responsible for their actions."

In a year when women have turned the world's attention to an epidemic of sexual abuse in the home and in the workplace, the award cast a spotlight on two global regions where women have paid a devastating price for years of armed conflict and was a rebuke to what Reiss-Andersen described as the failure of the global community to prosecute perpetrators of wartime sexual violence.

When the Islamic State overran her homeland in northern Iraq in 2014, Murad was abducted alongside thousands of other women and girls from the Yazidi minority, the group singled out for rape by the militant group.

Whereas the majority of women who escaped refused to be named, Murad insisted that she be identified and photographed, and her advocacy helped to recognise the genocide of her people at the hands of the terrorist group.

Mukwege's work, meanwhile, has been centered on a conflict half a world away in one of the most traumatized places on the planet, where villagers have fallen prey to militias, bandits, government soldiers and foreign armies: the eastern Democratic Republic of Congo. In a bare hospital in the hills above Bukavu, where for years there was little electricity or enough anesthetic, he performed surgery on countless women and campaigned relentlessly to bring attention to their plight.

On Friday, from a hospital in Bukavu, Mukwege told reporters: "This Nobel Prize reflects the recognition of suffering and the lack of a just reparation for women victims of rape and sexual violence in all countries of the world and on all continents."

He dedicated his prize to "women of all countries bruised by conflict and facing everyday violence."

In a statement, Murad congratulated Mukwege and said she was "incredibly honored and humbled''. She said she shared the award "with Yazidis, Iraqis, Kurds, other persecuted minorities and all of the countless victims of sexual violence around the world."

Using the Arabic acronym for the Islamic State, she added: "I think of my mother, who was murdered by Daesh, the children with whom I grew up, and what we must do to honour them. Persecution of minorities must end." 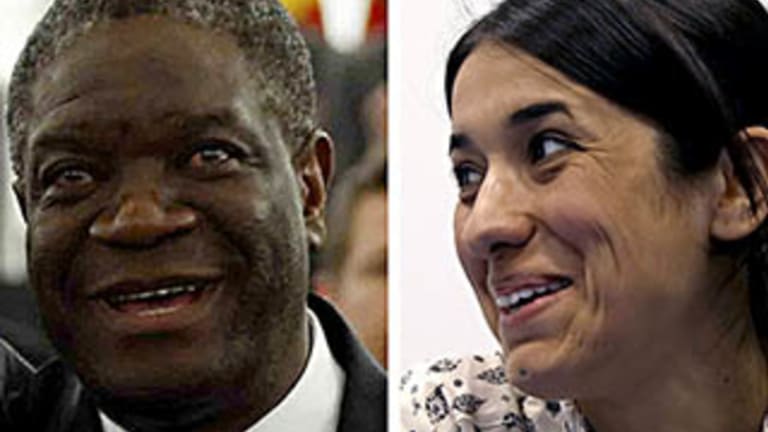 Born and raised in the village of Kojo in northern Iraq, Murad, along with her family, was at the centre of the Islamic State's campaign of ethnic cleansing. Kojo, on the southern flank of Mount Sinjar, was one of the first Yazidi villages to be overrun by the Islamic State, which launched its attack from the south on August 3, 2014.

Residents were herded into Kojo's only school, where women and girls were separated from the men. The male captives, including six of Murad's brothers, were loaded into trucks, driven to a field outside the town and executed.

The women and girls were forced into buses. Murad was taken to a slave market, where she was sold to an Islamic State judge. While the wives of Islamic State members were ordered to wear full-covering face veils and gloves, Murad was forced to wear makeup and suggestive dresses with spaghetti straps.

At night, the militant forced himself upon her, viciously beating her if she dared to close her eyes during the assault, she recounted. He warned her that even worse things would happen if she tried to escape. When he caught her jumping out of a window, he ordered her to undress. Then he sent in his bodyguards, who took turns raping her until she passed out.

"At some point, there was rape and nothing else. This becomes your normal day," Murad wrote in her autobiography, The Last Girl. "You don't know who will open the door next to attack you, just that it will happen and that tomorrow might be worse."

But she eventually escaped.

For years afterward, she refused to wear makeup. She embarked on a worldwide campaign, speaking before the UN Security Council, the US House of Representatives, the House of Commons in Britain and other global bodies.

Whereas other Yazidi survivors testified before the same bodies with a blanket covering them so that TV cameras would not capture their images, Murad broke with the norms of her honor-based society and insisted on showing her face.

In Yazidi villages in her former homeland, she has become an icon. Many carry her image on their phones, and posters of Murad adorn telephone poles.

Murad has said that she was exhausted by having to repeatedly speak out, but she said she knew that other Yazidi women were being raped back home: "I will go back to my life when women in captivity go back to their lives, when my community has a place, when I see people accountable for their crimes."

In Congo, the injuries that Mukwege has treated are ghastly: women who have had assault rifles stuck inside them; others pierced with chunks of wood; some victims collapsing on the hospital steps with deep rope burns on their necks from where they had been lashed to trees. Mukwege has also treated 2-year-olds and women in their 70s.

"It's not a women question; it's a humanity question, and men have to take responsibility to end it," Mukwege once said in an interview. "It's not an Africa problem. In Bosnia, Syria, Liberia, Colombia, you have the same thing."

In 2012, Mukwege delivered a fiery speech at the United Nations, upbraiding the Congolese government and other nations for not doing enough to stop what he called "an unjust war that has used violence against women and rape as a strategy of war."

His advocacy nearly cost him his life. Shortly after the speech, when he returned to Congo, four armed men crept into his compound in Bukavu. They took his children hostage and waited for him to return from work. In the hail of bullets that followed, his guard was killed, but Mukwege threw himself on the ground and somehow survived.

He spent more than two months in exile but decided that he had to return. "To treat women for the first time, second time, and now I'm treating the children born after rape," Mukwege said. "This is not acceptable."

When he returned, he received a hero's welcome. Banners flew across town with messages like "Welcome our Superman." To the people in the crowd, Mukwege urged hope and forgiveness.

Though he has criticized the Congolese government for acts of sexual violence by its troops, the government congratulated him Friday for the prize, even while chiding him for politicising his work.