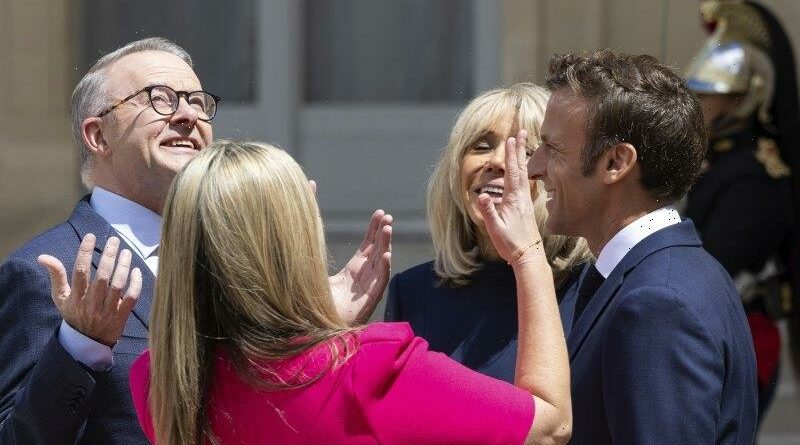 Paris: As far as symbolism goes, Anthony Albanese couldn’t have hoped for much better.

Over the past 12 months Australia’s standing on the international stage had fallen to new lows. With Europe now at war and growing tensions in the Indo-Pacific, the nation’s diplomatic efforts had stumbled at a time when it could least afford it. 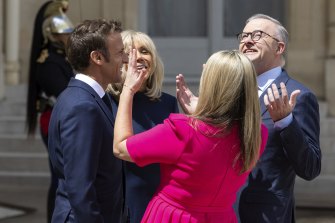 Prime Minister Anthony Albanese and his partner Jodie Haydon enjoy the sunshine with French President Emmanuel Macron and his wife Brigitte outside the Élysée Palace in Paris.Credit:Alex Ellinghhausen

So, here was the prime minister, just six weeks into the job, attempting to patch things up in a very public way. Foreign affairs have never been at the forefront of Albanese’s interests, but he prides himself on his relationships.

In truth, as Malcolm Turnbull pointed out earlier this week, not being Scott Morrison in this scenario was always going to be advantageous.

Emmanuel Macron, a highly divisive leader at home and in Europe, had no doubt milked Morrison’s missteps over the cancelled submarine contact at every turn. It was, at times, over the top, performative and petulant. It was all very French.

Nevertheless, the diplomatic blunder from Australia had caused serious ramifications by derailing free trade negotiations, severely straining relations within Europe and causing frictions between Paris, Washington and London. And at a time when Australia needs all the help it can get in the Indo-Pacific to curb Chinese Community Party influence, it became problematic. 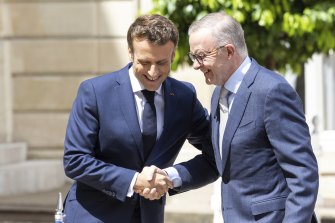 Macron and Albanese appeared relaxed at the Elysee Palace.Credit:Alex Ellinghausen

At the Élysée Palace, the 18th century Parisian mansion once home to Napoleon, Louis XV’s mistress and now Macron, the official greeting for Albanese was carefully crafted for the cameras.
Macron embraced his new counterpart with a handshake which morphed into a hug.

Wearing a cerise dress, the prime minister’s partner, Jodie Haydon, received smooches from Brigitte Macron and a kiss on the hand from the French president, who continued to hold on to it for what seemed like an eternity. They all smiled and laughed, and joked about the weather.

Then the leaders waxed lyrical about trust, respect and honesty and didn’t even need to mention submarines or their now dislodged political adversary. 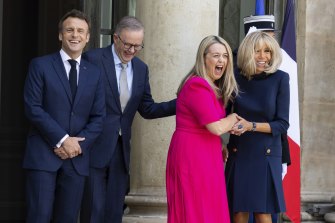 Australian Prime Minister Anthony Albanese and his partner Jodie Haydon are greeted by French President Emmanuel Macron and his wife Brigitte Macron at the Elysee Palace in Paris.Credit:Alex Ellinghausen

For the Australian leader it had to be a delicate exercise. It risked being viewed as an indulgence and a deliberate “up yours” to his predecessor. The Australian public doesn’t like being embarrassed on the world stage, but that should not be conflated with a love of all things French.

An exercise in grovelling would not have endeared the new prime minister to his public.

Both men were to give brief remarks before heading off to lunch and journalists were informed – at the request of the French – that there were to be no questions. But when an Australia journalist threw some bait in Macron’s direction, he could not help himself.

Asked if an apology from Albanese was necessary over the submarine fiasco, Macron said with a wry smile: “We will speak about the future, not the past. He is not responsible for what happened”.

He knew exactly what he was doing. As he did with “I don’t think, I know”, Macron made the most of his moment in the sun.

It ended before it became too over the top, but Macron reminded those gathered that the relationship between Australia and France had its roots deep in World War I.

“I would like to recall it here because no one in France forgets the fight that these tens of thousands of young Australians came to fight in the trenches of the Somme at our side more than a century ago,” he said. “We will never forget the brotherhood that was born from this fight and this sacrifice. Never.”

Among the next challenges the two nations face together is climate change and growing Chinese assertiveness in the Indo-Pacific.

France holds three territories in the South Pacific — New Caledonia, Wallis and Futuna, and French Polynesia, with the region home to 1.5 million French people, as well as 8000 soldiers stationed in the region. 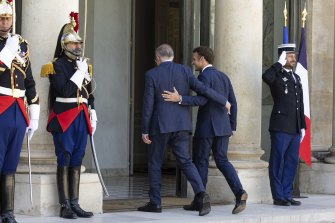 Macron and Albanese walk into the Elysee Palace in ParisCredit:Alex Ellinghausen

In an official communiqué following the meeting, Macron noted Australia’s new commitment to “ambitious” action on climate change, which he described as “a global challenge” and “the single greatest threat to the peoples of the Pacific”.

This was another example of how the change of government has changed how Australia is viewed in Europe. This is an environment where gestures about climate targets mean as much if not more than outcomes. It is perverse, but the previous Coalition government could never get its head round it.

For Albanese, the trip has provided a soft landing for his early diplomatic efforts.

The Labor leader’s week away from home has been successful and, more importantly, consequential. He will have learnt much about the role Australia can have on the world stage – at NATO, through climate discussions and in the battle to maintain hearts and minds in the Indo-Pacific.

If there were any doubts left that he wasn’t the full quid on China, they have dissipated.

But for now, rising fuel and food costs and energy bills will dominate his domestic agenda.

As much as travelling the world can be addictive, it’s the issues at home that voters want him to solve.