The trillion-ton megaberg! It’s 93 miles long, 34 miles wide… and heading for the British nature sanctuary of South Georgia at half a mile an hour. No wonder experts fear an ice apocalypse

They reveal how, in the freezing waters of the South Atlantic, an iceberg 93 miles long and the size of Somerset is travelling inexorably towards the British Overseas Territory of South Georgia.

This encroaching monster, thought to be the largest in the world, is moving at about half a mile an hour. It is now less than 125 miles from the island, which in summer is home to about 30 people — and a teeming ecoystem of millions of seals, penguins and other creatures.

In a matter of days, South Georgia may be hit by an iceberg roughly the size of the island itself, that could wipe out much of the life clinging to its surface.

There is no permanent human settlement on this bleak outcrop, though in summer up to 25 British Antarctic Survey personnel can live there, along with two government officers, their spouses and maybe four museum staff.

The RAF pictures reveal how this frozen monolith, thought to weigh about a trillion tons, is bearing down on South Georgia in the most serious ‘invasion’ the island has faced since Argentinian Navy forces seized control of its east coast after overpowering a small group of Royal Marines at the start of the Falklands conflict in 1982.

The sight of an iceberg several times larger than Greater London would surely strike terror into any resident as it ploughed towards them.

‘There is absolutely nothing we can do,’ said Dr Mark Belchier, South Georgia’s director of fisheries and environment, last month. ‘We get icebergs every year. But not like this.’ 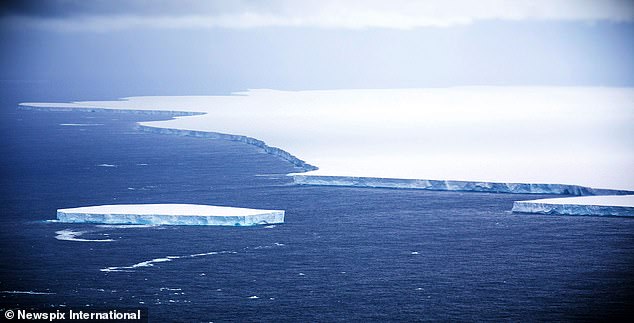 The iceberg is now less than 125 miles from the island, which in summer is home to about 30 people — and a teeming ecoystem of millions of seals, penguins and other creatures

Since it broke off from the Antarctic ice shelf in July 2017, the iceberg, named A68a, has moved at least 650 miles north.

Scientists have established that it is only about 650 ft (200m) deep — far shallower than many icebergs. This means it could run aground close to the island’s shore, melting hundreds of trillions of litres of near-freezing fresh water into the ecosystem, which would greatly alter the temperature and salinity of the surrounding sea.

It could take a decade for the iceberg to melt away entirely.

Last week the RAF mounted a reconnaissance of A68a. The British Forces South Atlantic Island (BFSAI) flight carried photographers, and an officer from the Government of South Georgia and South Sandwich Islands to observe in detail ‘cracks and fissures within the main body of the iceberg’.

The crew had to battle the fierce weather and thick cloud that bedevil the South Atlantic even in summer. The aircraft’s low altitude and the sheer size of A68a made it impossible to capture its size in a single photograph.

The RAF pictures show a ring of cliff faces up to 100 ft high — and A68a is already encroaching on the 479,000 sq m Marine Protected Area around South Georgia and the South Sandwich Islands. The fast-moving waters are predicted to send it looping around the southern part of South Georgia, after which it may run aground on its east coast.

Should this happen, billions of creatures living on the sea floor would be crushed. It would also create a vast frozen wasteland between the island’s seals and penguins and the open sea where they forage for fish and krill to survive.

The island’s hillsides are home to three million breeding pairs of macaroni penguins — the world’s largest population — along with 450,000 pairs of king penguins and thousands of long-tailed Gentoo and black-banded chinstrap penguins.

More than six million Antarctic fur seals (95 per cent of the global population) also crowd the beaches, plus about 110,000 breeding female Southern elephant seals — more than half the world’s total. 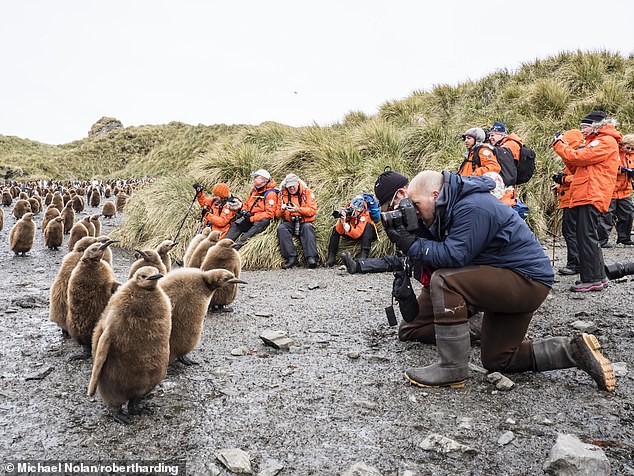 In a matter of days, South Georgia may be hit by an iceberg roughly the size of the island itself, that could wipe out much of the life clinging to its surface. Pictured: Penguins on the island

In 2004, another iceberg, A38, grounded at South Georgia, blocking penguins and seals from the waters where they hunted for food. Dead penguins and seal pups were later found on the beaches.

Professor Geraint Tarling, from the British Antarctic Survey, says: ‘During pup and chick-rearing, the distance penguins and seals have to travel to find food really matters. If they have to do a big detour, they won’t get back to their young in time to prevent them from starving to death.’

In any normal year, A68a would have become a tourist attraction for cruise ships. This year, though, the pandemic has wiped out the cruise trade, leaving the iceberg’s progress largely unnoticed.

Recent satellite images, however, suggest A68a is crumbling fast. The relentless battering of the South Atlantic swell is breaking off fragments that seafarers call ‘bergy bits’, ‘growlers’ or ‘brash ice’.

Masses of smaller icebergs have broken away from A68a, and fissures have formed that extend deep below its surface.

Even these smaller pieces must be tracked meticulously, as they are lethal threats to ships such as HMS Forth and South Georgia’s MV Pharos SG, which regularly conduct patrols in these waters.

Because of climate change, iceberg catastrophes may become more common in future. In October, a report funded by the British Antarctic Survey revealed there had been ‘more than ten significant ice‑shelf loss events in the past few decades resulting from rapid warming around the Antarctic Peninsula’.

The report, in the Royal Geographical Society Journal, found that with rising global temperatures, ‘shelfmelt’ would become more common.

Anna Hogg, a researcher from the University of Leeds Centre for Polar Observation and Modelling, warned that if the Antarctic’s Larsen C ice shelf continued to break up, it would accelerate rises in the world’s sea levels because it is holding back a large volume of ‘grounded ice’.

It is hard to predict A68a’s precise route, as weather conditions and other factors could cause its path to alter.

Professor Tarling is trying to remain optimistic. ‘A68a is devastating but incredibly interesting scientifically,’ he said last month. ‘It does set a precedent for what we may see in the future.’