Home » The veil of ‘concern’ 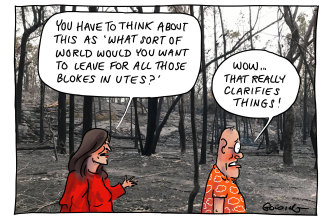 The veil of ‘concern’

The proposed reforms to the NDIS, most likely a cost-cutting exercise but palatably framed as a “fairer, simpler and more flexible NDIS”, seems yet another example of arrogance and welfare decimation mixed in with a minute dose of concocted empathy, in the hope that might mitigate the cruelty in the eyes of the public (“NDIS architect slams ‘formula’ cost cutting”, The Age, 24/4).

We see it all the time: fronting attacks on the disadvantaged or powerless with a thin veil of concern and empathy. The veils need to be pulled back.
Emma Borghesi, Mount Martha

Good luck with that
Stephen Duckett and Anika Stobart (“Caring for the nation’s vulnerable”, Comment, 20/4), your ideas to raise money to pay for aged care will never happen. The majority of voters want the government to pour money into aged care but are not prepared to pay more taxes to fund improvements.

Before the last election, when the Labor Party suggested changes to negative gearing and franking credits as a way to boost the budget, the Liberals ran very effective scare campaigns and were returned to government.

I find it very disappointing that the majority of people do not understand that the government collects tax to pay for the services we need and want. We don’t want to pay for them yet vote for the parties that increase our handouts.
Sandra Ashton, Beaumaris

The PM’s three strikes
I’m not sure our Prime Minister is keeping “all options on the table” as he has proclaimed in the past.

He seems anti-renewables, anti-carbon tax, anti-nuclear, anti-target setting, but he appears pro-coal, pro-gas, pro-carbon sequestration and now pro-hydrogen. At least that is evident by where his announcements are and where the money is allocated.

He is not following scientific advice and world’s best practice, and is putting all his eggs in a couple of baskets. Seems he can’t hold a hose, can’t hold a syringe and now can’t hold a candle to what the rest of the world is doing.
Greg Tuck, Warragul

What about these costs?
Our Prime Minister reiterates he can’t commit to climate action because he doesn’t know the costs.

I look forward to him cancelling the submarine and F35 fighter contracts. Their indeterminate but ever-increasing costs will bankrupt us long before the climate disaster does.
Mark Freeman, Macleod

It can be done
As inner-city dwellers, we must be Scott Morrison’s nightmare. We swept past net-zero emissions years ago and are now into carbon drawdown. We eat mainly organic plant food grown in our small inner-city garden plot plus a much larger community food garden within walking distance from a train station.

I do not own a car but walk, cycle and travel on electric trains for transport. My wife cannot cycle but uses a small pure electric car (5000 kilometres a year, about the same as my bike travel) if the distance is too great to walk. Her car, our heating, cooling, hot water, fridge and cooking are powered exclusively from our solar PV panels. Any excess energy is stored in our batteries or fed into the grid (FIT).

I hope he’s right
PBS News Hour is a television show made in the US for primarily an American audience but also beamed around the world.

On Friday’s show, Michael Mann, a climate scientist from Pennsylvania State University, had this to say about the US climate summit: “Now, with the US once again demonstrating leadership, that creates an environment where other countries, and in particular some intransigent actors like Australia … Scott Morrison …. who really has made feeble commitments thus far … this is going to put more pressure on them.”

Australia was the only “intransigent actor” named. Let’s hope Mann is right about the pressure.
Jan Simpson, Kennington

The timing is crucial
Scott Morrison and the Australian government just do not get it. Climate change policy must be about both “how” and “when”.

The timing of the changes is the imperative, and although we do not currently have all of the “hows” to achieve net zero by 2050, we have enough “hows” to achieve at least 50 per cent reduction by 2030. That timing is crucial.
William Wallace, Ascot Park, SA

Will the army step in?
When hotel quarantine fell apart in Victoria last year, the Andrews government was heavily criticised, in particular by Prime Minister Scott Morrison and Treasurer Josh Frydenberg, for employing a private security firm to manage it instead of using the military as suggested by Mr Morrison.

In light of that ongoing criticism, why did the federal government go to the corporate sector and contract DHL, Linfox and Accenture to distribute and monitor the vaccines?

We all know the vaccine distribution is hopelessly behind schedule. We all know the stories of vaccines showing up without barrels or needles, of drastically inadequate amounts, of missed delivery dates, of transparency issues.

Why did the government trust the free market after Victoria’s experience? When can we expect the army to step in, Mr Morrison?
Stephen Williams, Wandin North

Note from the Editor

The Age’s editor, Gay Alcorn, writes an exclusive newsletter for subscribers on the week’s most important stories and issues. Sign up here to receive it every Friday.