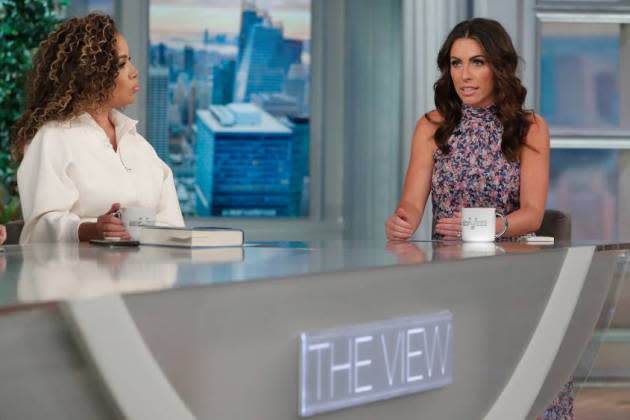 Alyssa Farah Griffin, the former Trump White House director of strategic communications, is in final talks to join “The View” as the new conservative co-host of the daytime talk show, Variety has learned.

Multiple sources tell Variety that ABC executives have chosen Farah Griffin, 33, to join “The View” for its 26th season, which kicks off in the fall. She has sat at the Hot Topics table regularly this season, auditioning for one of the most high-profile jobs on TV.

Meghan McCain served as the conservative co-host of “The View” from 2017 through 2021, bringing a rating surge as she got into heated debates with the other co-hosts during the Trump era. Before that, Elisabeth Hasselbeck changed TV in 2003 as the first Republican arguing about the headlines of the day in daytime TV.

“The View” was created by Barbara Walters in 1997 as a talk show for women by women. In recent years, the daytime staple has excelled by leaning into politics, and solidifying itself as a go-to stop on the campaign trail.

Two sources caution that a deal for Farah Griffin has not been closed yet, but say it’s more-than-likely a matter of time. Should Farah Griffin officially get the gig — which our sources say she will — the announcement will probably arrive in the coming weeks, according to a person familiar with the show.

When contacted by Variety, a spokesperson for “The View” did not confirm nor deny Farah Griffin’s casting, simply stating: “We do not have a co-host announcement to make at this time. Stay tuned.”

A representative for Farah Griffin did not respond to Variety‘s request for comment.

Currently, the Hot Topics table is lead by moderator Whoopi Goldberg with co-hosts Joy Behar, Sunny Hostin and Sara Haines. Ana Navarro, who is a part-time co-host, also auditioned for the permanent job, and is said to be disappointed that she wasn’t selected, according to several sources.

Farah Griffin’s appointment to “The View” could be controversial on both sides, as she worked for Trump, only disavowing him after the Jan. 6 insurrection — as she began her television career. “There was a brief period where I, you know, I drank the Kool-Aid,” she told Vanity Fair.

On social media, some fans have threatened to boycott the show if she’s selected. According to reports, comedian Wanda Sykes recently dropped out as a guest on “The View” because she didn’t want to sit at the same table with Farah Griffin.

Farah Griffin served as former vice president Mike Pence’s press secretary for two years from 2017 to 2019, and then became press secretary for the United States Department of Defense, before joining the Trump White House in April 2020 where she helped engineer the president’s response to the COVID-19 pandemic. Farah Griffin spent roughly eight months in her role working for the president, resigning one month after his lost to President Joe Biden.

At the time of her exit, Farah Griffin said that after three and a half years, she would be leaving the White House to pursue new opportunities, stating, “I am deeply proud of the incredible things we were able to accomplish to make our country stronger, safer and more secure.” But ever since she left the White House, Farah Griffin has condemned Trump, publicly disagreeing with his failure to accept the election results and blaming him for the Jan. 6 insurrection.

In late 2021, she joined CNN as a political contributor where she frequently speaks about her time in the Trump White House.

Farah Griffin’s father is the conservative editor and author Joseph Farah, who founded the far-right website, WorldNetDaily, and rose to prominence with his Clinton conspiracy theories surrounding the suicide of Vince Foster, and then became known for promoting birtherism during Barack Obama’s presidency. Farah has been singled out by the GLAAD Accountability Project for his repeated anti-LBGTQ and hateful comments. He called same-sex marriage “one of the most radical ideas considered since child sacrifice,” and has asserted that transgender people “mutilate oneself sexually.”

During one of her appearances guest co-hosting “The View,” Alyssa Farah Griffin spoke about political polarization tearing about families, revealing that her father refused to attend her wedding because of “political differences after I spoke out against President Trump.” Asked by Behar if her father is “in the cult,” Farah Griffin responded, “Unfortunately. I mean, listen, the MAGA strength runs really far and deep.”