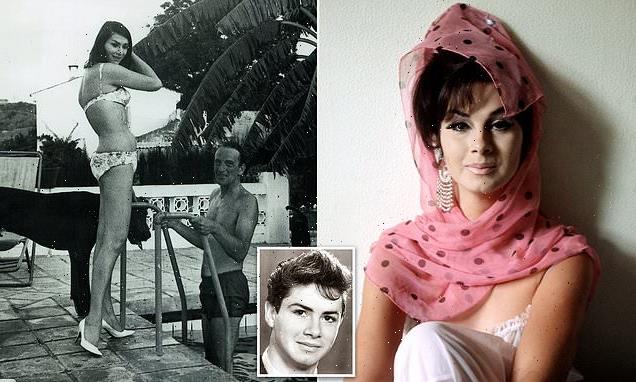 The Vogue model and trans trailblazer who men found irresistible: April Ashley, who has died aged 86, bewitched Elvis, Omar Sharif and Michael Hutchence after escaping a violent childhood to become a courageous pioneer

After April Ashley made history in 1960 by risking her life to have gender reassignment surgery — what was then known as a ‘sex change operation’ — she declared: ‘I decided I was never going to hide who I was.’

With striking looks and innate style, she was in demand as a fashion model, though the general public had no idea the mannequin in those modish clothes had transitioned.

But a Sunday newspaper got hold of her story and published it without her permission. April put on her make-up and a Chanel suit, and went out to face the world.

‘I got slapped four times,’ she said. ‘The most extraordinary moment was in Sloane Square. I saw this elegant woman coming straight at me. She came up to me and slapped me so hard I had her finger marks on my face for three days. She didn’t say a word, just kept on walking.’

All her life April Ashley, who has died aged 86, braved violence and abuse, in her determination never to pretend to be anyone but her real self. 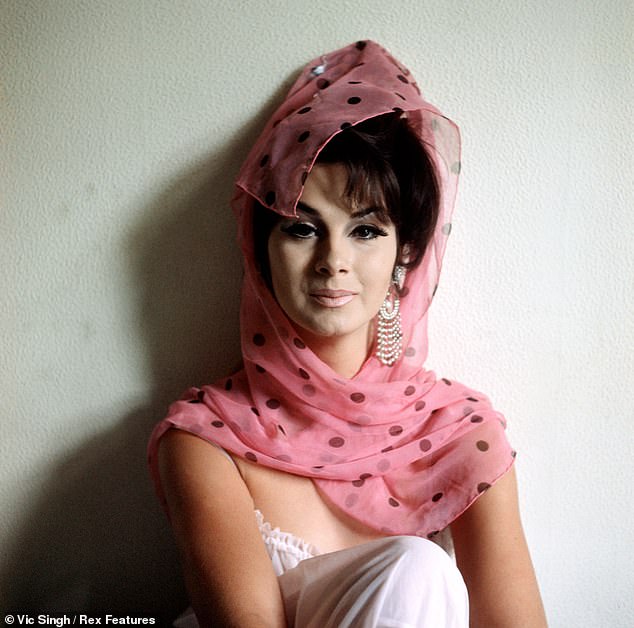 April Ashley (pictured) made history in 1960 by risking her life to have gender reassignment surgery — what was then known as a ‘sex change operation’. She later declared: ‘I decided I was never going to hide who I was’

She endured a succession of scandals, including a disastrous marriage and the subsequent court case that ended it. Simultaneously a glamorous celebrity and a laughing stock, she accepted the plaudits and brushed off the sneers with equal grace.

During her years as a Vogue fashion model, she was photographed by David Bailey and Terence Donovan. Her beaus included Omar Sharif, Michael Hutchence and Peter O’Toole. Elvis Presley was briefly besotted with her.

They met, she liked to say, at a nightclub in Paris, where he couldn’t take his eyes off her. They danced until Presley’s controlling manager dragged him away. For years, the King would send her gifts of champagne.

But the pressure of fame and intense disapproval from sections of the media took a heavy toll on her health. She drank hard: when she was awarded the MBE in 2012 for ‘services to transgender equality’, one snide wit remarked it was more likely to be ‘services to the champagne industry’.

She once admitted that, when she ran a restaurant called AD8 in Knightsbridge, Central London, in the early 1970s, she could knock back 32 dry martinis in a night. Introduced to Princess Margaret, she was embarrassed to discover she could not shake hands. She had a champagne glass in one and a whisky tumbler in the other.

She was born in April 1935, one of six surviving children whose father Fred Jamieson was a cook in the Merchant Navy. The midwife declared her a boy and her parents christened her George. But from as early as she could remember, she did not feel like a ‘George’.

Her mother, Ada, was violent and short-tempered, and used to beat George for wetting the bed. After one brutal thrashing, the doctor had to be called. He warned the family that, if such an assault was ever repeated, he would have Ada arrested. 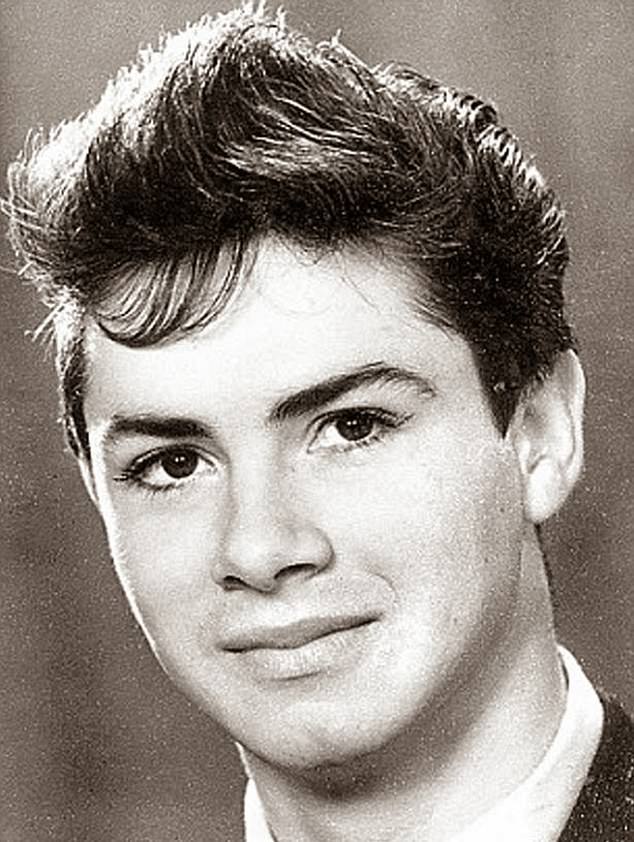 ‘I never grew up as I was supposed to,’ April remembered. ‘I was emaciated and very shy. I felt like a total freak. There were no whiskers, my voice didn’t break and I sprouted breasts. I hated myself and there was no one I could look to.’

As a teen, George was regularly attacked in the street and, after following Fred’s example by the Merchant Navy, attempted suicide after being raped.

George was sent to a psychiatric hospital in England and treated with electro-convulsive therapy and male hormones. Work in a Lyons Corner House in London followed, as did friends in Soho who were less judgmental.

Working as a ‘hostess’ at Le Carrousel club in Paris led to George’s first name change —becoming Toni. Now dressing in women’s clothes, she announced her ambition to have gender reassignment surgery by the age of 25.

Toni spent four years in Paris, having a course of oestrogen injections, and in 1960 — days after turning 25 — travelled to Casablanca in Morocco to have a dangerous, intensely painful operation costing £1,500 that included inverting the penis to create a vagina.

The surgeon, Georges Burou, said, ‘Bonjour monsieur,’ before administering the anaesthetic. When she came round after the operation, she heard him say: ‘Bonjour, mademoiselle.’ 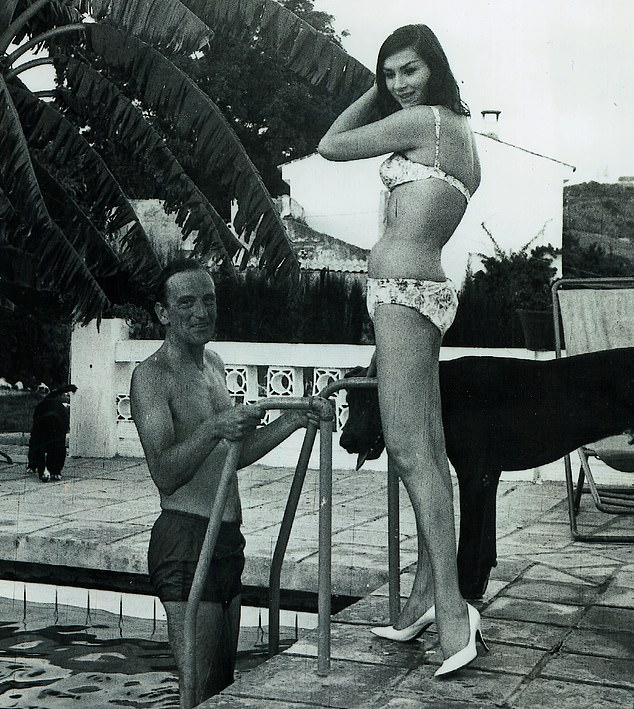 April Ashley, pictured with husband to be Arthur Corbett as they holiday in Marbella, Spain

She gave herself a new name —April for her birthday, Ashley because she admired Leslie Howard as Ashley Wilkes in Gone With The Wind.

She began dating and modelling. After appearing in a movie with Bing Crosby and Bob Hope, The Road To Hong Kong, she met O’Toole (who knew she was transgender and didn’t sleep with her).

He introduced her to Sharif (who didn’t know, or didn’t care, and did).

The Ministry of Pensions and National Insurance accepted her change of identity and issued her with papers. With these, she was able to obtain a driver’s licence and a passport as a woman.

But disaster struck when she met the cross-dressing son of Lord Rowallan, the Hon Arthur Cameron Corbett.

They were married in 1963 but the marriage lasted just 14 days before she left him. ‘I ran off with the heir to the Duke del Infantados to his palace in Seville,’ she said. ‘We made love under the Goyas and Velazquezes.’

Her divorce from Corbett turned nasty when she asked for alimony. He sued instead for an annulment, on the grounds that she was ‘a person of the male sex’.

For years the case dragged on until in 1970 a judge, Mr Justice Ormrod, ruled that the marriage had ‘little or nothing to do with any heterosexual relationship which I can recall hearing about’.

April, said the judge, was ‘a biological male and has been since birth’. The marriage was cancelled. Once again, she was the subject of intense public opprobrium. Fleeing briefly to California, she developed drink and drug habits that led to a heart attack.

Following the defiant and boozy years as a restaurateur, she retreated to Hay-on-Wye. She then returned to California, where she met and married Jeffrey West. The marriage didn’t work out, but their friendship endured.

In 2005, the Gender Recognition Act meant she was finally and fully recognised as female. A revised birth certificate reflected this.

She advised the actor Eddie Redmayne, in 2015, on how to play a trans woman for his film The Danish Girl.

‘I said, ‘Eddie, when I was a star, you never had to pay for anything. We got clothes, jewels, everything. When I walked on to the terrace of the Carlton hotel in Cannes, ten people sent a bottle of champagne each. It’s lovely to be a star — so enjoy it.’

But the glamour hid a lifetime of pain.

‘I never asked to be born like this,’ she said when she received her MBE. ‘I would like to have been born normal like everyone else. I wanted to live in the real world and do what everyone else does. I think I have lived my life with enormous dignity.’