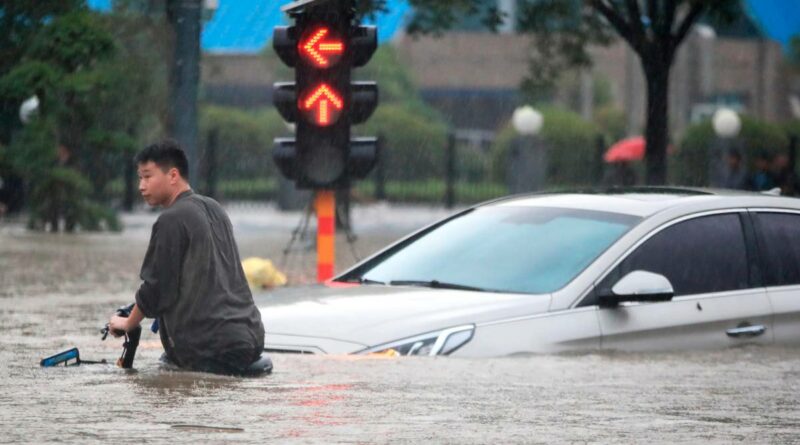 Chen Shuying was sitting at home with her husband and their 3-year-old grandson on Tuesday when water began to surge through the door. Within minutes, it was well above her waist. “The water came so fast,” she said.

They made it to the roof, where they waited for hours for the water to recede. Two days later, she still cannot return home, she said. They were lucky. Three neighbours — a grocery shopkeeper and two of the grocer’s customers — were swept away by the floodwaters and have not been seen since.

The formidable destructive power of the floods that engulfed Henan province in central China became clearer Thursday, even as new areas were inundated. Still more rain is in the forecast, following days of torrential downpours, including the strongest on record in the area Tuesday.

The death toll from the flooding continued to rise, with provincial officials saying 33 people were now confirmed killed. At least eight remained missing, the officials said, but those figures appeared to be preliminary at best given that rescuers were continuing to try to reach flooded areas in outlying districts.

The disaster that has unfolded since heavy rain began Sunday has affected more than 3 million people in the province, emergency officials there said, including more than 250,000 who were displaced from their homes. Even as the rains eased somewhat — and officials lowered the alert levels — desperate searches continued for loved ones unaccounted for more than 48 hours after the worst of the flooding.

The Paper, a newspaper belonging to a state-owned media group, on Thursday posted a list of people searching for missing relatives. The missing included Yan Yichen, a 12-year-old boy from Gongyi, who told his family that he was curious to see the floodwaters and went out for a look.

“He never came back,” the boy’s grandmother, Cui Yuncai, said, sobbing, when reached by telephone Thursday.

In towns and villages on the outskirts of Zhengzhou, the provincial capital at the centre of the disaster, residents described still more who remained unaccounted for, like the grocer and his customers. Some residents who fled their homes in Mihe, on the Sishui River and 35km west of downtown Zhengzhou, waited Thursday by the side of a nearby highway for news.

A man who would only give his last name, Zhang, said he was still searching for his father and four other relatives.

“Once the flood was noticed, it was too late,” Zhang said, describing a surge of water 5 feet deep. “This is the first time I saw such a big flood.”

He, like others, held out hope that those missing were stranded in flooded areas without electricity to charge their phones.

Liu Dan, a Zhengzhou resident, said her husband, Liu Zhihao, has not been in touch since Tuesday night, but that she held out hope. The couple have two children and she is eight months pregnant with their third. Liu Zhihao, 30, a salesman, went out that afternoon, apparently on business.

“He sent me a message at 5:10 in the afternoon asking how we were,” Liu Dan said in a telephone interview. “I replied saying we were all OK, and then I never heard back. Since then his phone has been off, so we’re just waiting and waiting. It’s been 48 hours now. I think there’s still hope. He’s not the irresponsible type.”

In Xinxiang, a city north of Zhengzhou, about 100 people were stranded on the second floor of an elementary school, according to a post on Weibo, a Chinese social media platform. Many of them were children.

They had apparently sought refuge from the rising water, which by Thursday had reached the second floor.

“Urgently need rescue,” a woman wrote in the post. “More than half of the trapped people are elders and children, the rain is still going on and the water level is rising strongly! It is reaching the second floor very soon.”

The situation could not immediately be verified by The New York Times. Calls to mobile numbers listed on the post were unanswered.

Power was knocked out in dozens of villages, and water still swamped broad areas across the province. People turned to social media to spread news and direct emergency rescuers to those in need. A post from Xinxiang showed a video of flooded streets, with a man pleading for help, saying most of the people trapped in buildings without power near him were older.

On an arduous drive through Henan province on Thursday, many roads and bridges were flooded or blocked by mudflows. Zhengzhou remained largely cut off: Railroads and highways were still closed, and airline traffic suspended.

Many homes in Mihe, which is in a flat-bottomed valley with steep slopes of red soil, had been destroyed or badly damaged. Chen, who survived with her husband and grandchild, had fled to a nearby village.

“Now we have nothing to eat, no water to drink, no home to return to,” she said. “I don’t know what to do.”

Across the countryside, downed power cables snaked across roads, village streets and alleys, the poles supporting them having been washed out.

In one village near Gongyi, where at least four people were reported to have been killed Tuesday, Chen Shuailin, 21, said the power had been out since he woke up on Tuesday morning. He worried about charging his phone and preparing food without electricity. “Now it’s cooking by gas,” he said, “and we burn coal.”

In Zhengzhou, subway service remained suspended after flooding that trapped trains in tunnels that filled with water. At least 12 people died in the subway, and hundreds had to be evacuated in harrowing rescues. Near the city’s third ring road, dozens of cars remained piled up at the entrance to a long highway underpass, still submerged. It was not clear whether those inside the vehicles had time to escape — and some appeared to have gone missing.

Two of them were friends, Xu Yukun and Li Haoming, both 14. According to Xu’s sister, Zu Panpan, they had been out with friends when their electric bike had been swept away in the floodwaters at the entrance to the underpass. They called the friends to tell them where they were but they have not answered their phones since.

Their mother, Zu said in a telephone interview, has been waiting near the underpass as efforts were made to pump out the water. She herself has not slept in two days and was on her way back to Zhengzhou from the southern city of Guangzhou.