Listening to the announcement of the Victorian road map last week was widely anticipated, and harrowing, for all Victorians. 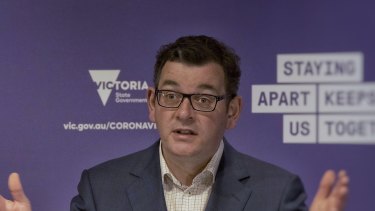 I was one of a team of four from the University of Melbourne and New England University that had provided rapid modelling of scenarios for Vic DHHS to help guide their road map. We were not the only input, but an important one.

None of the four of us had seen the road map before it was announced last Sunday. Our anticipation was even more eager than that of the average Victorian – which was high enough.

The major task we were given was hard – modelling the step down from something like stage three to stage two. What should the targets be?

Our modelling suggested that releasing from stage three to stage two at an average of 25 cases a day over the past 14 days would result in a 62 per cent probability of a third wave by Christmas.

We knew our modelling was good, but no model is perfect. Modelling the future is prediction and crystal-ball gazing.

But this is life and death, people's liberty and the economy – not just clothes on the line.

My declarations declared, what do I make of the road map? Eight out of nine; very good.

There are five stages to it. Different levels of opening up. I cannot fault it – five out of five. At the back end, there is COVID normal – should we be so lucky as to eliminate the virus. And stage one preceding that. And stage two before that, the stage I suspect we will spend the most time in between now and when a vaccine arrives. They look sensible in their balance of workers going to work, al fresco dining quotas and home-visiting bubbles.

Then there are the triggers to transition between these five stages, that is four triggers. The first trigger looks good. Metro Melbourne looks well on track to get to a 14-day average of 30-50 cases or less before September 28 – possibly a week earlier based on a simple exponential extrapolation of counts in the past 10 days.

Jumping to the back end, the triggers to go to stage one and stage zero at first glance look tough. Is it elimination by stealth? Yes and no. You would only go into these near-normal and pre-COVID stages if one was on the cusp of, or actually achieving, elimination of community transmission.

So, after thinking it through, they make sense. Although the hard reality is that the chance of us achieving elimination is remote. Unless we have a good dose of good luck, do not expect to be spending any time in stage zero before there is a vaccine, and wish only for a few precious weeks in stage one – hopefully straddling Christmas and New Year’s.

Which only leaves one transition – step three or that from stage three to stage two. The one we were charged with focusing on the most in our modelling. And the one everyone is focusing on and judging the road map by.

Ouch – that is tough. By this standard, NSW would be in stage three.

Our modelling suggested that releasing too soon from stage three to stage two increases the risk of a lockdown by Christmas. True. Our model is clever, but not so clever that it can incorporate all nuance. For example, mystery versus non-mystery cases. And circumscribing clusters of highly interconnected cases from more disperse cases.

I propose that we can relax the triggers to attain transition from stage three to stage two if cases are clustered. If mystery cases are low.

Moreover, we should recognise the growing expertise of our public health workforce to sledgehammer outbreaks early and contact trace. And we could evolve to smart mask policy, including requiring better fitting masks on public transport and in busy indoor environments. These factors should increase our protection from a resurgence.

These tweaks – I argue – could see us transition safely out of stage three to stage two at a higher threshold than five cases on average a day, and considerably earlier than October 26. Without too much increased risk.

But again, this road map is good. It is transparent. And we can tweak it to be even better.

Tony Blakely is professorial fellow in epidemiology at the Melbourne School of Population and Global Health, University of Melbourne.