BLACK DOG: Theresa May adrift over Love Island, glaring at reporter as she admits she’s never watched the summer favourite while at G7 summit

The nadir of Tony Blair’s shameless populism in No 10 was when he called for Coronation Street’s Deirdre – played by the late actress Anne Kirkbride – to be freed from jail for a crime she didn’t commit.

Vicar’s daughter Theresa May refuses to stoop so low. Asked during the G7 summit in Canada if she had ever watched Love Island, she glared: ‘Never.’ Theresa May refuses to stoop so low. Asked during the G7 summit in Canada if she had ever watched Love Island, she glared: ‘Never’

Downing Street was suspicious of claims that Boris Johnson was ‘deeply disappointed’ that his private speech last week attacking Philip Hammond and Theresa May was leaked.

‘Absolute rot,’ said a source close to No 10. ‘Boris supporters leaked it deliberately so he could undermine and humiliate her while claiming his fingers weren’t on it.’

Right-winger O’Grady has accused the PM of ‘howling at the moon’ over Brexit and told Tory 1922 Committee chairman Graham Brady to summon May to a ‘meeting without coffee’ – i.e. to sack her.

Don’t hold your breath for DD to disown Saucy Sarah.

Will ‘Krusty’ Jim have last laugh?

As one of the Ulster MPs propping up Theresa May’s Government, Jim Shannon carries clout at Westminster.

If Jim finds out that Tory MPs have cruelly likened him to Krusty the Clown, the chain-smoking, gambling addict from The Simpsons, Shannon’s DUP might just pull the plug on the Prime Minister.

Mind you, Jim’s had much worse:he was once voted ‘least sexy MP’.

Friends of Philip Hammond declined to panic after Nadine Dorries was the sole Tory MP to call for the Chancellor to be sacked after Boris Johnson accused the Treasury of sabotaging Brexit. 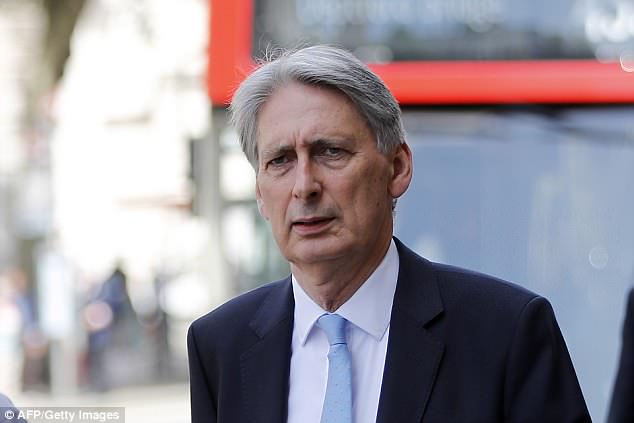 ‘With all due respect to Nadine, if that is the best they can muster, Philip needn’t worry about Theresa sending the bailiffs to No 11 just yet,’ gloated one Hammond pal.

May’s still in a hole

The fact Theresa May has spent the past 48 hours in a 34-mile wide meteor crater – the venue for the G7 summit in Quebec – is a rich source of disloyal jibes from Tory Brexiteers who now want her out.

‘Wasn’t it a meteor that wiped out the dinosaurs?’ sniped one. ‘I can only assume our soon-to-be extinct Prime Minister felt very much at home over there.’

There were raised eyebrows after the annual Commons v Lords tug-of-war contest – won by the muscle-bound MPs – when John Bercow failed to show for the post-match glad-handing and prize-giving.

‘Too busy with his parliamentary duties,’ says the Speaker’s Office.

‘Too frit to be seen shaking hands with Tory Commons team captain Alec Shelbrooke, who wanted him out,’ said one MP.