United front! Theresa May and Gavin Williamson share smiles at Armed Forces Day parade amid rift over military spending – as PM announces next year’s event will be in Salisbury after Russian poison plot

The Prime Minister has marked Armed Forces Day by announcing next year’s event will be held in Salisbury in response to the nerve agent attack.

Theresa May says there is ‘nowhere more suitable’ than the Wiltshire city to hold next year’s celebrations, describing the military response to the incident as ‘remarkable’.

Mrs May arrived in Llandudno, North Wales, today for this year’s national event alongside the Princess Royal and Defence Secretary Gavin Williamson in light of this week’s rift over military spending. 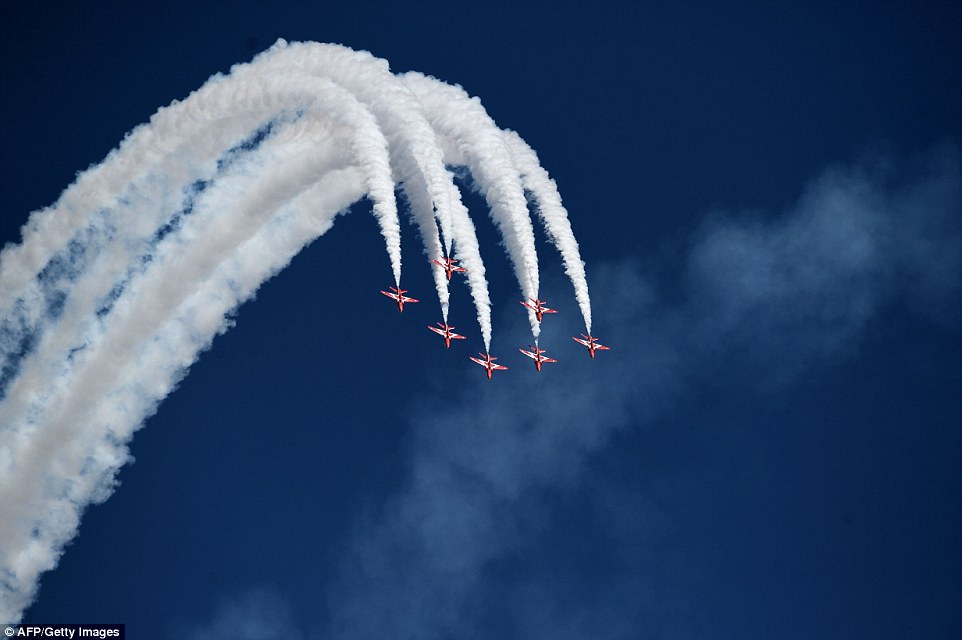 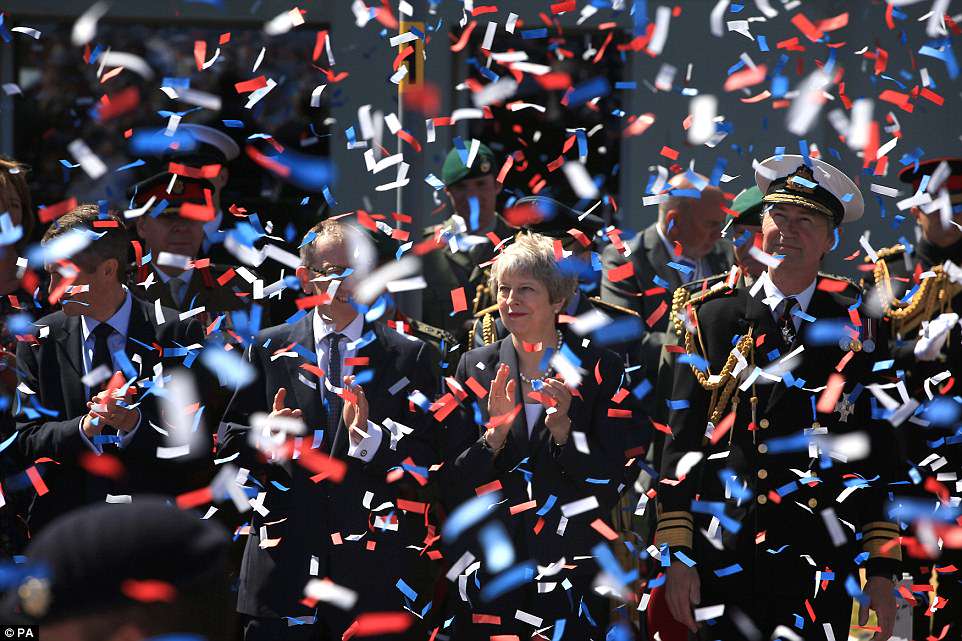 Theresa May (pictured with her husband and Defence Secretary Gavin Williamson) celebrated Armed Forces Day by announcing that next year’s will be held in Salisbury, the site of a Russian nerve agent attack 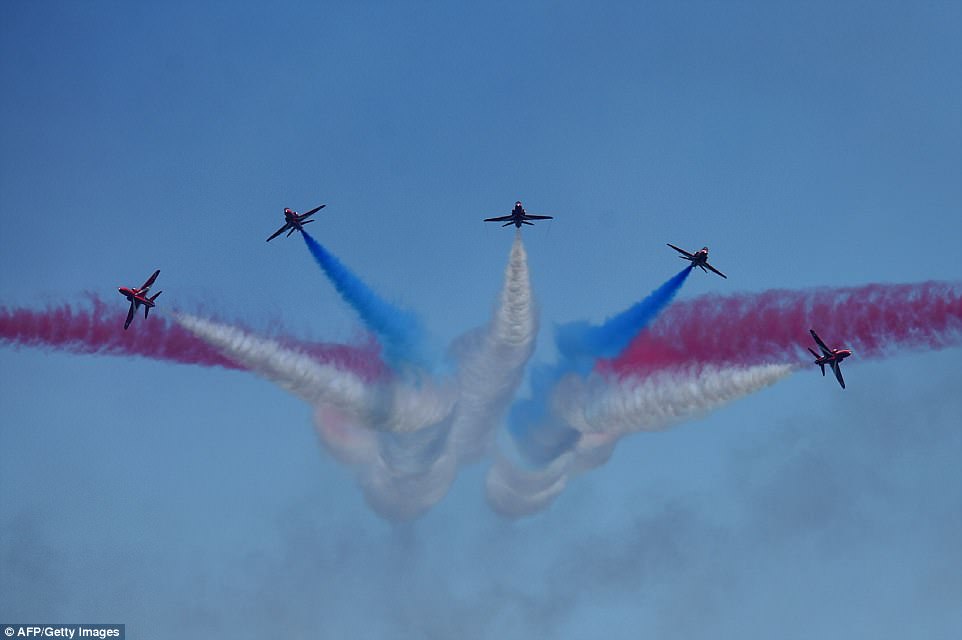 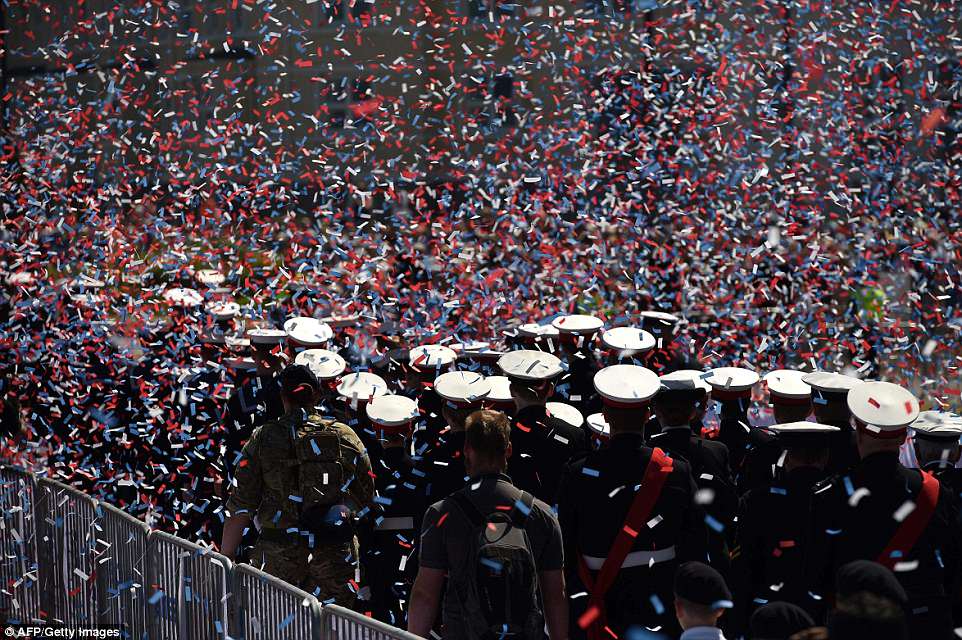 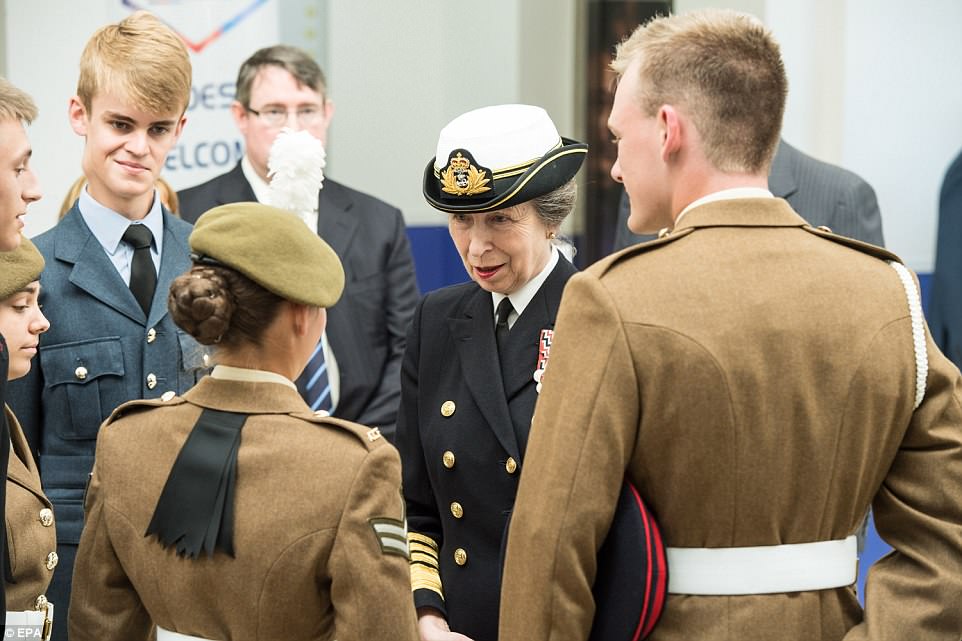 The Princess Royal greeted military personnel as the nation came together to honour soldiers for Armed Forces Day in Llandudno, North  Wales 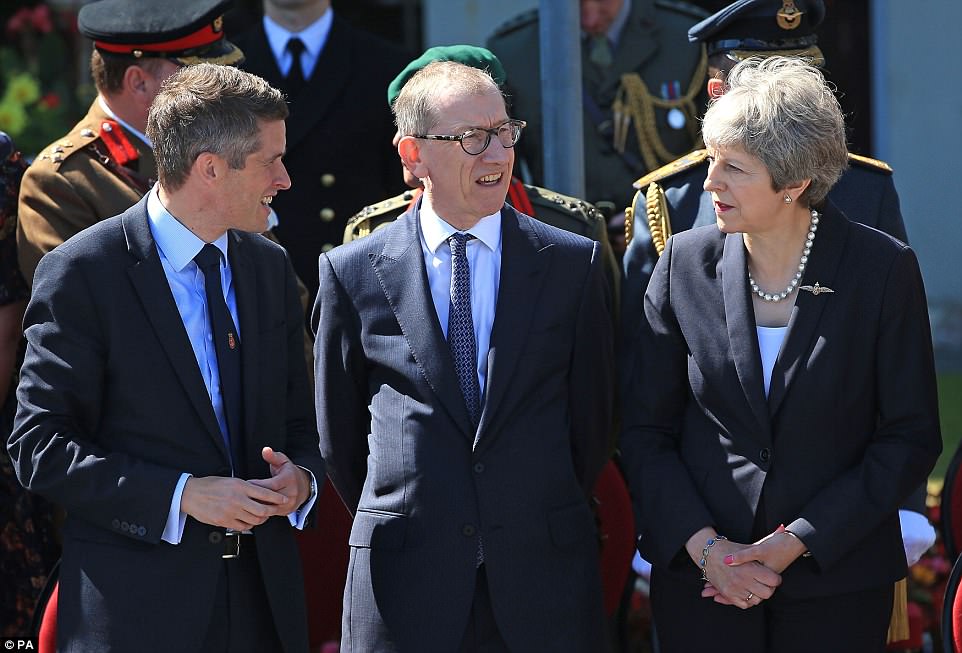 Secretary of State for Defence, Gavin Williamson (left) and Prime Minister Theresa May with her husband Philip (centre)  are pictured during today’s celebrations for National Armed Forces Day in Llandudno 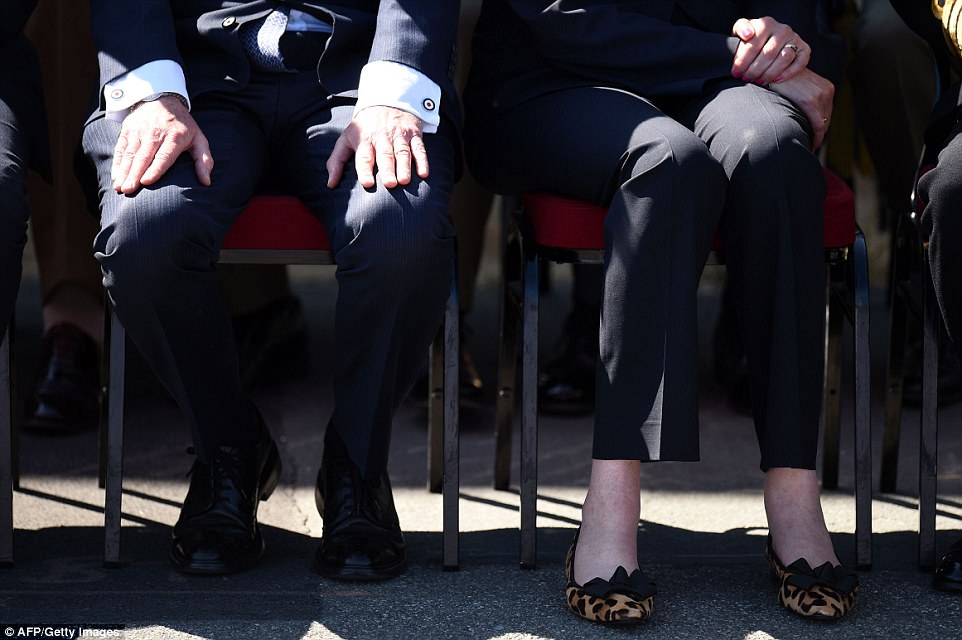 Gavin Williamson came under fire following reports he had told military chiefs he could bring down the Prime Minister if she refuses to back him in his fight to get an extra £2billion a year from the Treasury.

But today he joined Theresa May for the 10th annual Armed Forces Day to greet regulars, reserves, their families and veterans at the seaside town for a parade, receptions, displays and Red Arrows and Typhoon flypasts.

Speaking of the decision to host next year’s celebrations in Salisbury, the Prime Minister said: ‘In the days immediately following the attack, expert military teams helped to safely move contaminated vehicles, the Defence Science and Technology Library at Porton Down then expertly tested the nerve agent and today around 200 specialist military personnel from the Army and RAF continue to support the recovery.

‘By holding Armed Forces Day here next year, we are also celebrating the tremendous resilience and great spirit of Salisbury and showing clearly it is open for business. It’s a great city, enriched by military history and a wonderful place to visit.’ 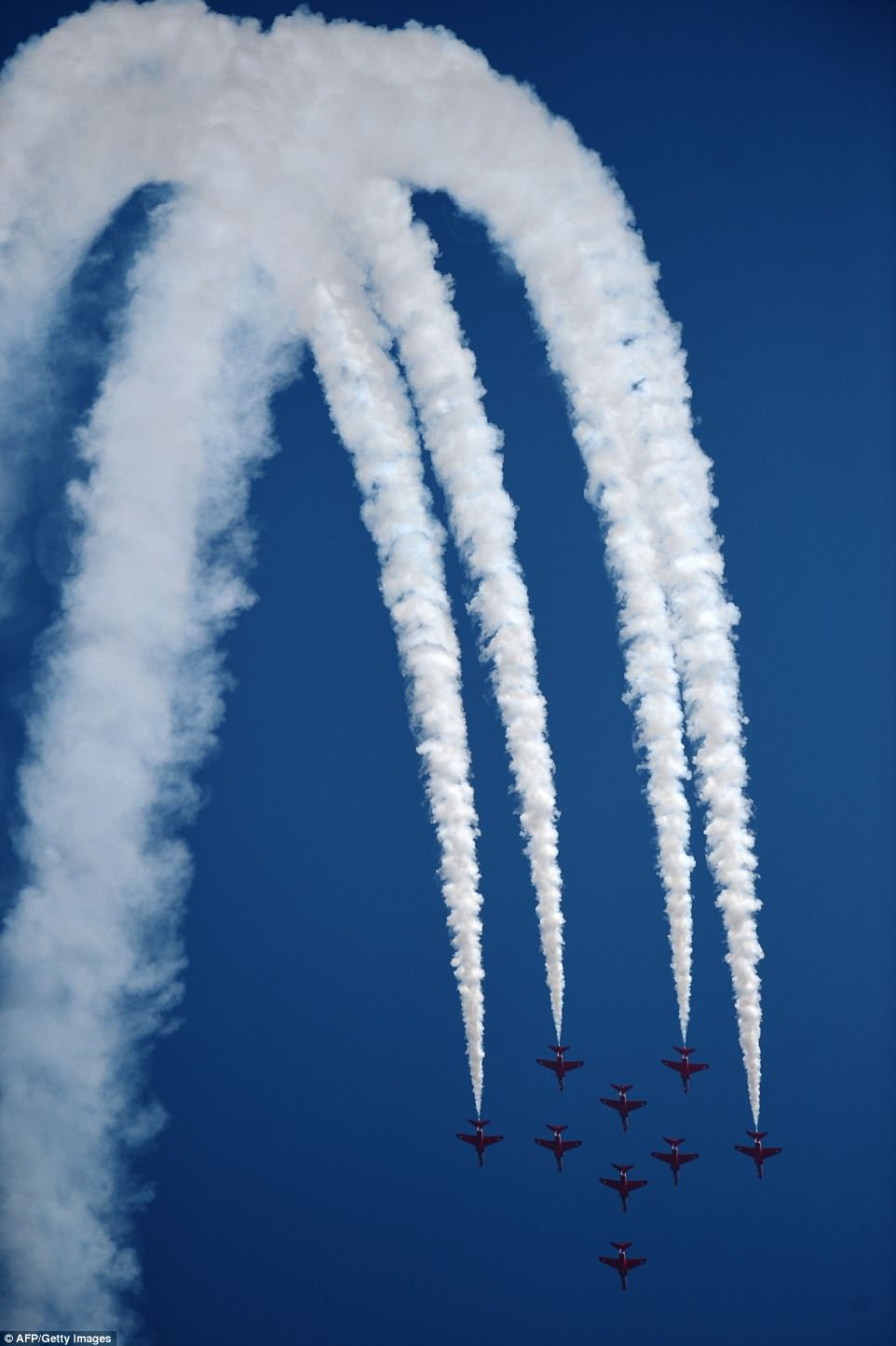 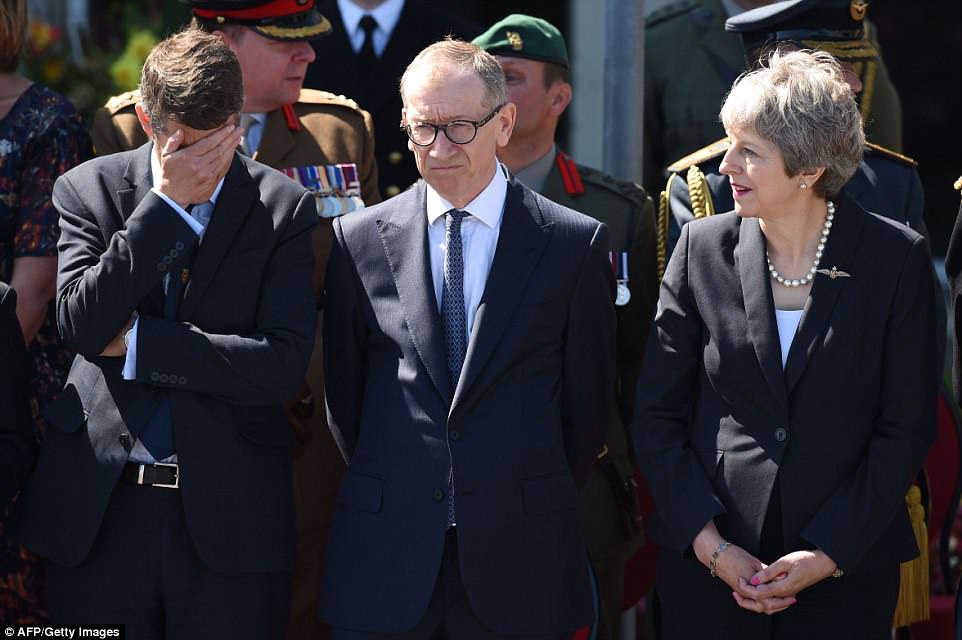 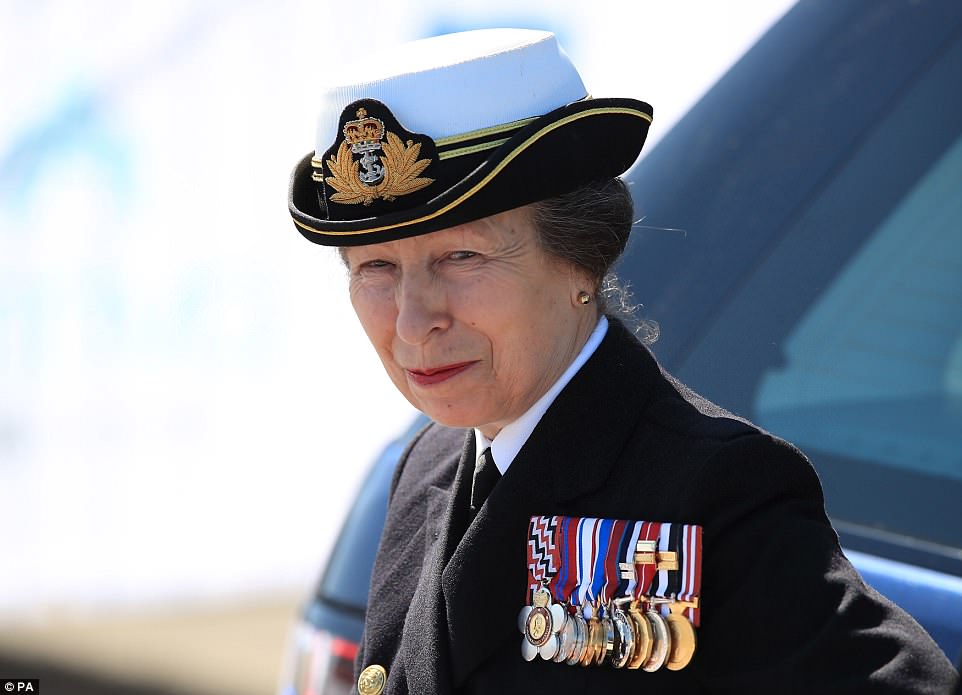 The announcement will be made during over 300 events around the world today, including street parties and military parades.

‘The city has a historic link with our Armed Forces and our troops demonstrated once again their bravery, dedication and skill during the central role they played following the reckless nerve agent attack here this year. 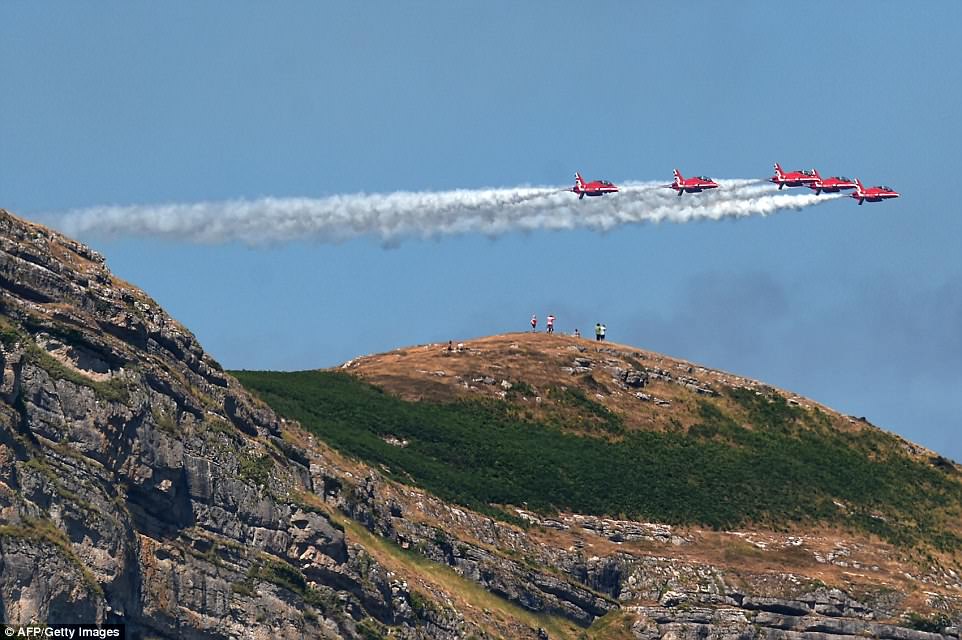 ‘Our extraordinary servicemen and women continue to help Salisbury and the people of this beautiful cathedral city through the clear up and investigation, and it’s extremely fitting that next year the city and the entire nation will be able to thank them here for their commitment and unwavering service to protecting our nation from the deadliest of threats.’

Speaking of today’s event, Mr Williamson said: ‘Today we mark the 10th Armed Forces Day and it remains a valuable opportunity to honour our troops who work so hard to keep us safe.

‘Our servicemen and women are on hand every hour of every day to protect us from the threats we face and today I encourage people across the UK to come together and salute them for their tireless commitment.’ 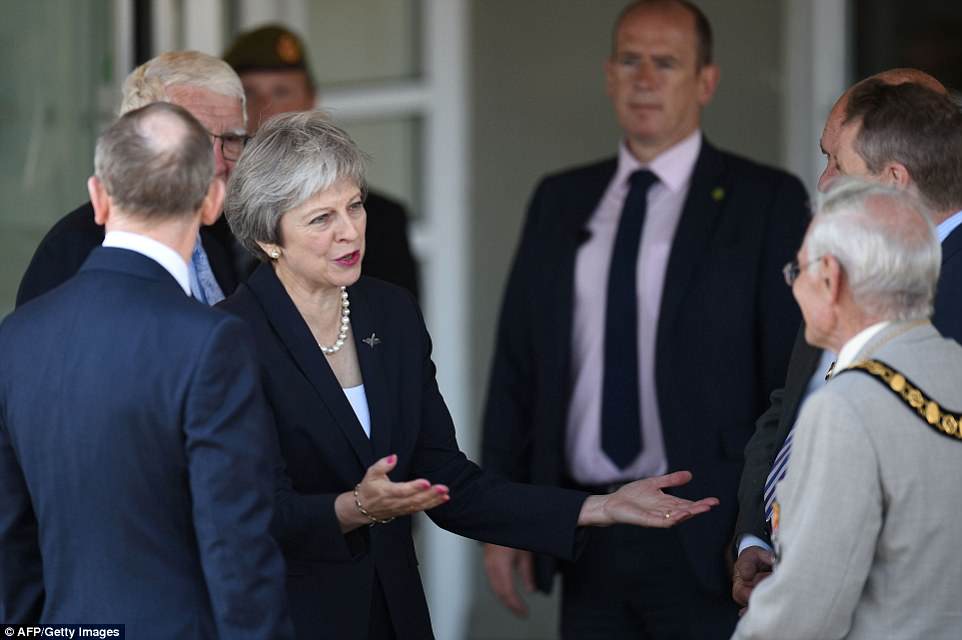 After a Red Arrows air display, the Prime Minister went on a walkabout meeting members of the public and military personnel.

She met one man who told Theresa May his brother was in the Army, to which she replied: ‘He’s doing a fine job for us.’

Mrs May then moved onto another stall which had a rowing machine which she pointed out and said: ‘I use one of them at the gym.’

The Prime Minister posed for photos with members of the public with some shouting ‘well done Mrs May’. 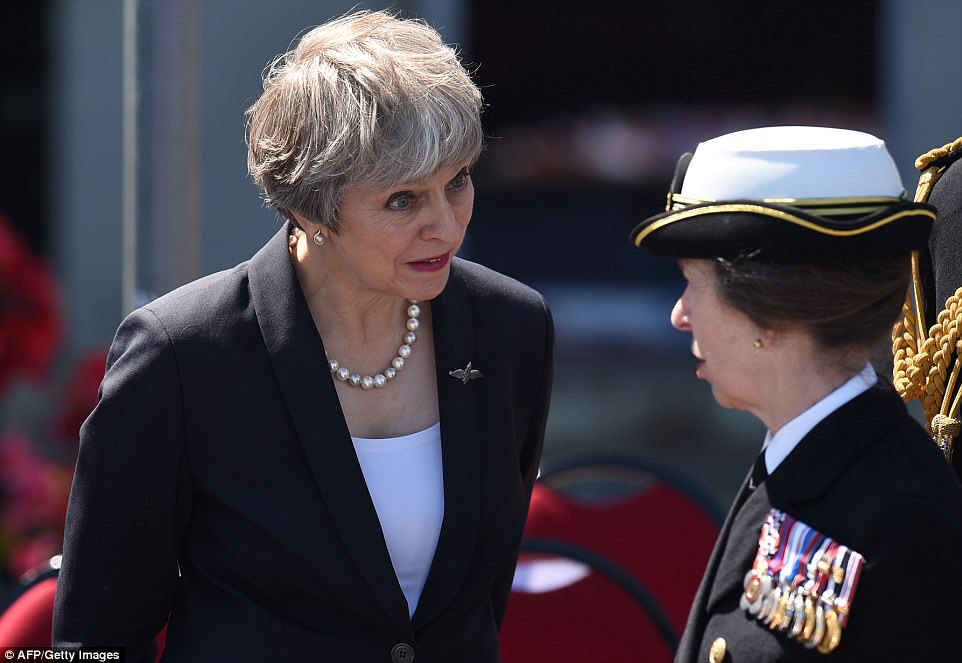 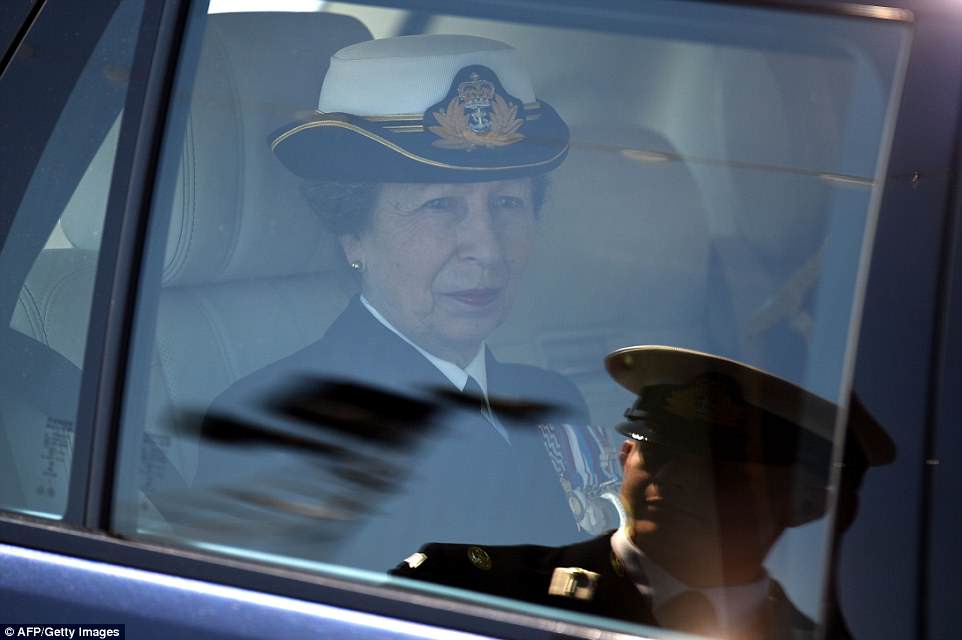 In a video which is due to be posted on social media, Labour leader Jeremy Corbyn says: ‘Labour strongly supports the Armed Forces Covenant by which this country promises that those who have served and their families, are treated fairly.

‘Whether it’s healthcare, housing or pay, we must do more to ensure that our duty to you matches your service to us.’

Speaking ahead of the event, Labour’s shadow defence secretary Nia Griffith MP said: ‘It is completely unacceptable that our servicemen and women have seen a real terms pay cut for each of the last seven years, all because of Tory austerity.’

She added: ‘They serve the nation with courage and dedication and it’s high time their service was properly recognised. That’s the least they deserve.’

Thousands of people lined the promenade to greet Theresa May and the Princess Royal as they entered Venue Cymru on Saturday.

Mrs May was greeted with a gentle round of applause and Anne received cheers as she entered the building shortly after.

A few protesters also made their way along the seafront, displaying banners saying ‘peace and justice’ and ‘don’t fund bombs, fund the NHS’.

The Prime Minister applauded and the Princess Royal saluted a variety of military personnel as they marched past to mark the start of Armed Forces Day.

Brass bands from all sectors of the armed forces played as each took it in turns to salute Anne in the military parade along Llandudno promenade.

Huge amounts of red, white and blue confetti covered the surrounding area throughout the first event of the celebrations.

The thousands of visitors who lined the promenade joined Theresa May and Defence Secretary Gavin Williamson in applauding each military group as they marched past.