Singapore: Malaysian Prime Minister Muhyiddin Yassin has led south-east Asian leaders in urging wealthier countries such as the United States and the United Kingdom to escalate their exports of COVID-19 vaccines, while calling for the global pharmaceutical patent system to be upended.

A new wave of the coronavirus and its variants is wreaking havoc in the region, which apart from Singapore has some of the lowest inoculation rates in the world, chiefly due to a shortage of supply. 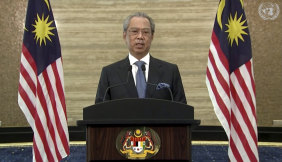 While Chinese vaccines are being used to combat the infection throughout much of south-east Asia, the outbreak in India has slowed down access to doses through the international facility known as COVAX.

There was a further blow this week with the world’s biggest vaccine manufacturer, the Serum Institute of India, flagging it would continue to suspend external shipments until the end of the year as it moved to “scale up manufacturing and prioritise India”.

The vaccine shortage is felt acutely in south-east Asia, where the virus is now gripping nations that prevented major surges in the past, as well as Indonesia and the Philippines, countries that endured the region’s worst outbreaks during the pandemic.

Indonesia has been a vocal opponent of vaccine nationalism and the prime ministers of Malaysia, Thailand and Vietnam used speeches at the virtual Future of Asia conference on Thursday to ramp up the campaign.

Muhyiddin implored richer nations to do more to support the vaccine rollout beyond their own borders only hours after Malaysia recorded a record high of 6075 new cases in a day.

Singling out the US and UK, Muhyiddin said China had exported about 200 million vaccine doses – 48 per cent of its total production – and India had sent abroad about 66 million doses – 34 per cent of what it had manufactured.

“In comparison, the US and UK have only exported 3 million and 1 million of the vaccine doses respectively, a mere 1.1 per cent and four per cent of their total production respectively,” he said.

“There have been 1.23 billion doses administered across 174 countries so far with 252 million doses or 20 per cent of the global supply taken up by the USA alone.”

US President Joe Biden announced on Wednesday it would increase its supply of vaccines by 20 million and send out 80 million doses of AstraZeneca, Pfizer-BioNTech, Moderna and Johnson and Johnson doses over the next six weeks.

Biden also said this month he backed the waiver of intellectual property rights for coronavirus vaccines, a position that was endorsed as “tremendous news” by Australian Prime Minister Scott Morrison but has been resisted by drug makers and European nations such as Germany.

Muhyiddin wants a total shift from what he says is a nationalistic approach to vaccine intellectual property.

“To prepare for a long century of recurring health emergencies, the temporary IP suspension must give way to a total transformation of the pharmaceutical patent system. Pausing the gears is not enough. Our obligation is to dismantle it entirely and Asia must lead the way,” he said.

While less than four per cent of Malaysia’s 32 million people have received even one dose of the vaccine, Thailand’s goal of inoculating 70 per cent of population of 70 million also looks ambitious, as only 1.5 million having received one shot so far. It also notched a daily record of 9635 new coronavirus cases this week as the virus swept through its prisons.

Thai Prime Minister Prayut Chan-o-cha welcomed the speed of the vaccination process elsewhere but said “we must ensure equitable access to vaccines”.

“Thailand hereby calls for COVID-19 vaccines to be considered global public good. We need collective action towards a global vaccination campaign, to prevent vaccine nationalism and politicisation,” he said.

Vietnam’s Prime Minister Phạm Minh Chính said “the production and distribution of vaccines is no longer the purpose of any single country or corporation”.

Cambodia’s leader, Hun Sen, made no excuse for relying on China as the nation passed the 20 per cent mark in its mission to vaccinate 10 million people.

“America said it would provide three or four million doses of vaccine. To this hour we have not received that from America,” he said. “If don’t ask China, who am I to ask for help? The people floating across the river?”

Earlier, China and the US were urged by Singapore Deputy Prime Minister Heng Swee Keat to put aside their geopolitical rivalry to work together on on global distribution.

The Australian government said in March it was contributing an additional $100 million to distribution of vaccines in south-east Asia as the Quad group, comprising the US, Australia, India and Japan, announced a commitment of one billion doses to the region.

Australia has already sent two batches of 20,000 doses to East Timor this month as well as well as flying vaccines to Pacific countries such as Papua New Guinea and Fiji.