Three war memorials – honoring an airman, a naval officer and a soldier – have been stolen in West Sussex.

The near life-sized ‘silent silhouettes’ are an initiative from the Royal British Legion to mark the centenary of the end of the First World War and to symbolise the communities that took part.

A black silhouette of a soldier was taken from outside a Co-Op in Main Road, Yapton, overnight on Wednesday August 29. 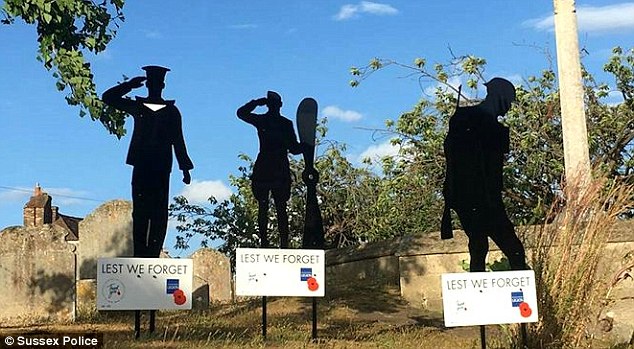 Three war memorials – honoring a naval officer, an airman and a soldier – have been stolen from Yapton and Petworth in West Sussex

The other two memorial figures – the naval officer and airman – are believed to have been stolen over night five days later on Monday September 3 from St Mary’s Church in Church Street, Petworth.

The memorials are of great sentimental value and police are appealing for anyone with any information to get in touch.

Cllr Chris Kemp, Chairman of Petworth Town Council, said: ‘I am saddened by the theft of the sailor and airman from outside the church here in Petworth.

‘I feel that it is a bit of thoughtless misguided mischief by those who do not understand or appreciate the significance of what these silhouettes represent.

‘Many in our community here in Petworth have a personal connection to the Great War 100 years ago and have sponsored a soldier in memory of a family member or a person of significance. 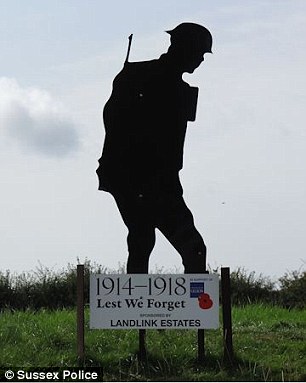 The first black silhouette of a soldier  (pictured) was taken from outside a Co-Op in Main Road, Yapton, overnight on Wednesday August 29

‘I have been moved by the emotion attached to this personal act of remembrance and thanks to those that have made the ultimate sacrifice for our freedom.’

Local resident Eileen Lintill said: ‘I think it is very disrespectful to the memory of those they are representing and upsetting for those that have raised funds to provide them.’

To mark the upcoming centenary of WWI the Royal British Legion invited the public to take part in a movement to say ‘Thank You’ to the generation who served, sacrificed, rebuilt and changed the nation.

The silhouettes are near life-size and can be fixed to a wall or attached to an upright post in public or private spaces.

A range of silhouettes, including the iconic image of a Tommy, have been placed across the UK.

Other figures include soldiers from across the commonwealth, RAF/RFC, Navy Officers, munition factory workers and suffragettes.

At their base are the words ‘Lest we Forget’ and business or community groups that buy or sponsor a silhouette can have its name incorporated in the base wording.

After the first memorial was taken, a spokesperson for The Royal British Legion told the Standard: ‘The Legion is shocked and saddened to hear of this incident. The Silent Soldier installations honour the memory of the Armed Forces personnel who have made the ultimate sacrifice and those who defend the freedom we enjoy.’

You can also contact the independent charity Crimestoppers anonymously on 0800 555 111 or report it online.