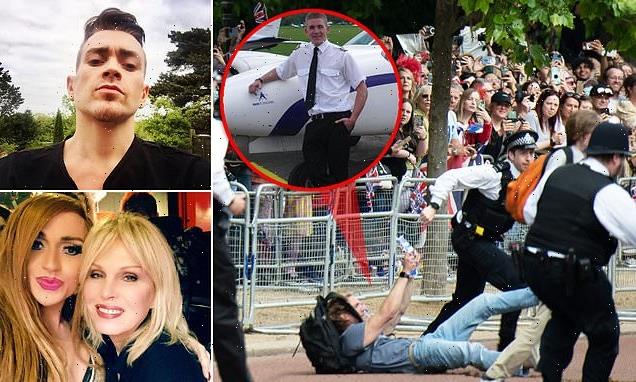 A former Thomas Cook plane pilot and a drag act called Silver Summers were among 25 protesters who attempted to disrupt the Queen’s Platinum Jubilee yesterday.

Reading man Todd Smith, 33, was dragged through manure by police as he was hauled out of the road after 10am on Thursday, clutching a flyer urging Royal land to be reclaimed.

Mr Smith – who took seven years to complete his £140,000 pilot training – worked for Thomas Cook until 2019 when the airline collapsed and he was diagnosed with Lyme Disease.

He became a spokesman for Extinction Rebellion and has been seen in his pilot uniform at past protests.

Mr Smith said this morning: ‘My sister always used to jest that I’d end up a runway or road sweeper instead of a pilot.

‘It seems I’ve excelled myself and become a royal horse’s pooper scooper. On a serious note, we’re in the midst of a global collapse and the only way you can get any media to cover the topic is by doing stupid sh** like this and facing a prison sentence.

‘It’s high time we stand up for life, heal from our collective trauma, move out of denial and get out and help restore nature to it’s former, functioning glory.’

He was joined at the protest by Beau King Houston, who also performs as drag act Silver Summers. 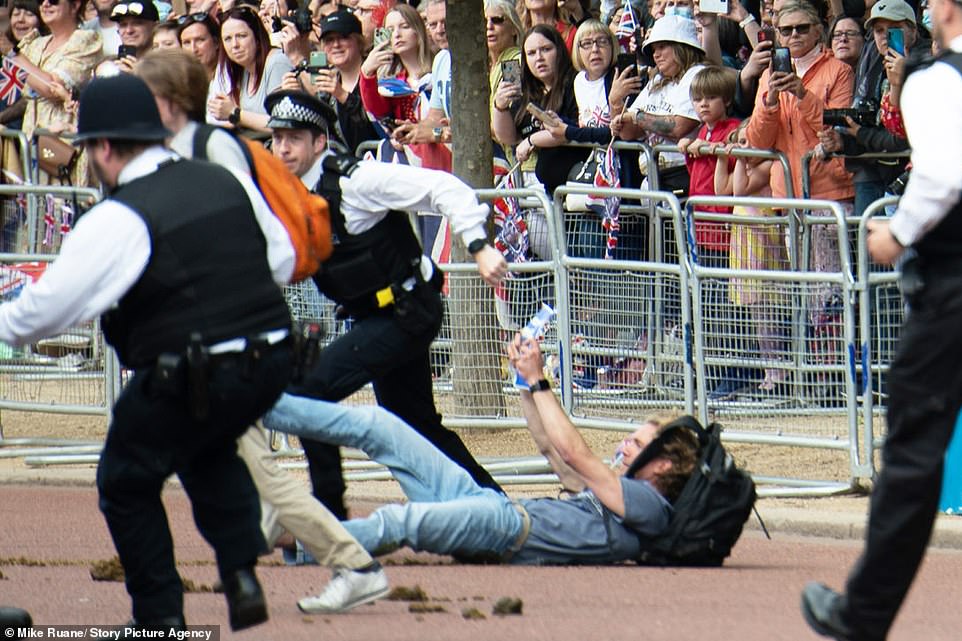 Former pilot Todd Smith, 33, is dragged through manure as police disrupt his protest at the Queen’s Platinum Jubilee event 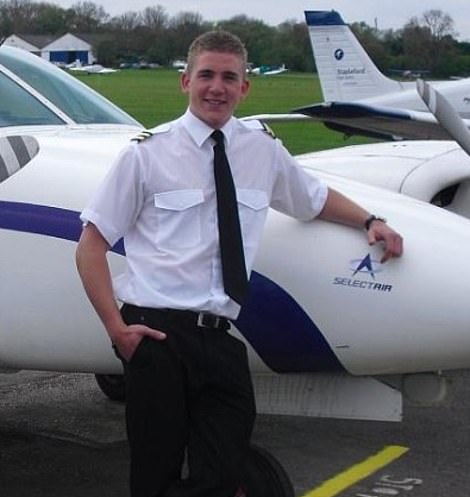 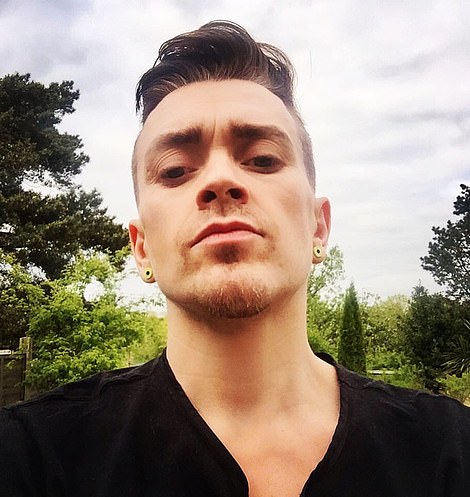 Todd Smith, right, and Beau King Houston, left, were both among the 25 protesters who smashed security at the Mall 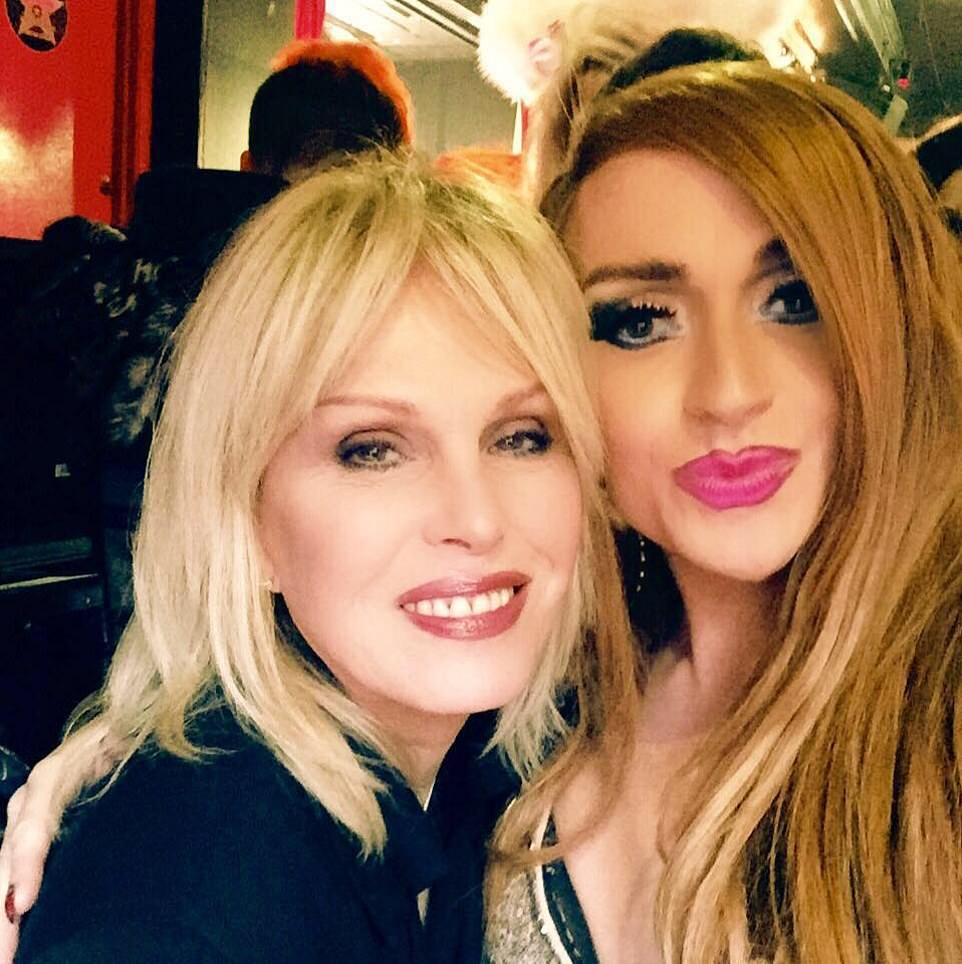 Beau – who uses the pronouns he/him/them – said yesterday: ‘The Royal family has had decades to lead the way on a just transition to plant-based farming and has failed to do so.

‘This transition is common sense and simple, we all win. 76% of currently farmed land could be rewilded and absorb carbon from the atmosphere.

‘This would restore nature, spare billions of animals, and present a solution to the climate emergency, all in one act.’

Up to 25 protesters were booed by crowds as they attempted to smash through security measures along the Mall at the start of the Queen’s Platinum Jubilee – before being dragged to the sidelines through horse manure.

Metropolitan Police officers were forced to pounce on the eco-morons ahead of the Trooping the Colour, as officers were filmed racing over barriers to where the parade was to be held, before dragging the disruptors along the ground and out of the way of the procession.

Incredibly at least two of the protesters – who were from Animal Rebellion – were able to sit in the middle of the Mall as the marching band approached.

Officers hauled them out of the way as the musicians walked by them avoiding them completely, prompting applause to the police and boos to the activists. 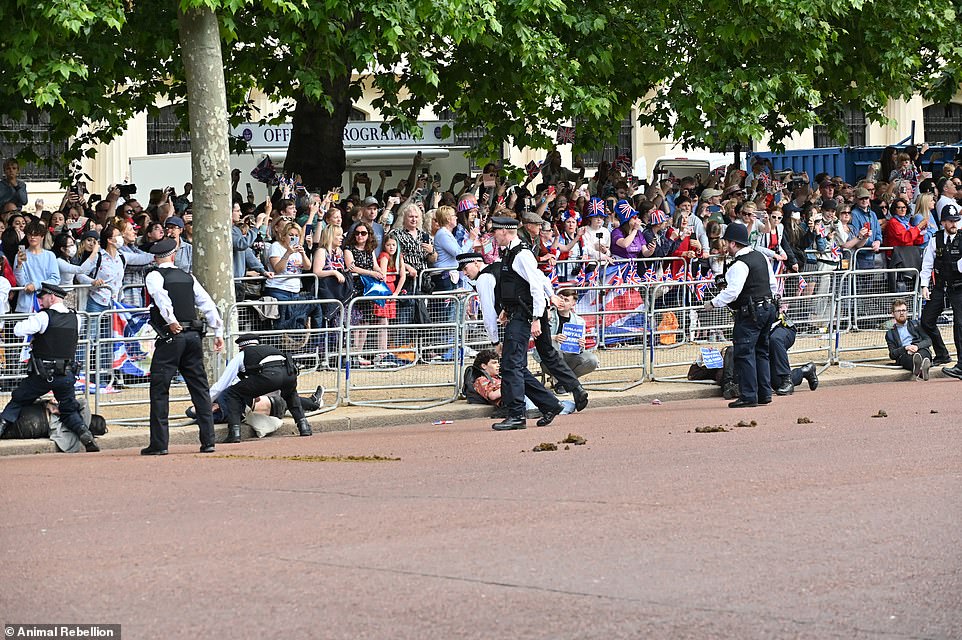 Five people were seen here at the side of the Mall being arrested, it is not clear if they got onto the strip itself to protest. At least one (far left) was dragged through horse manure 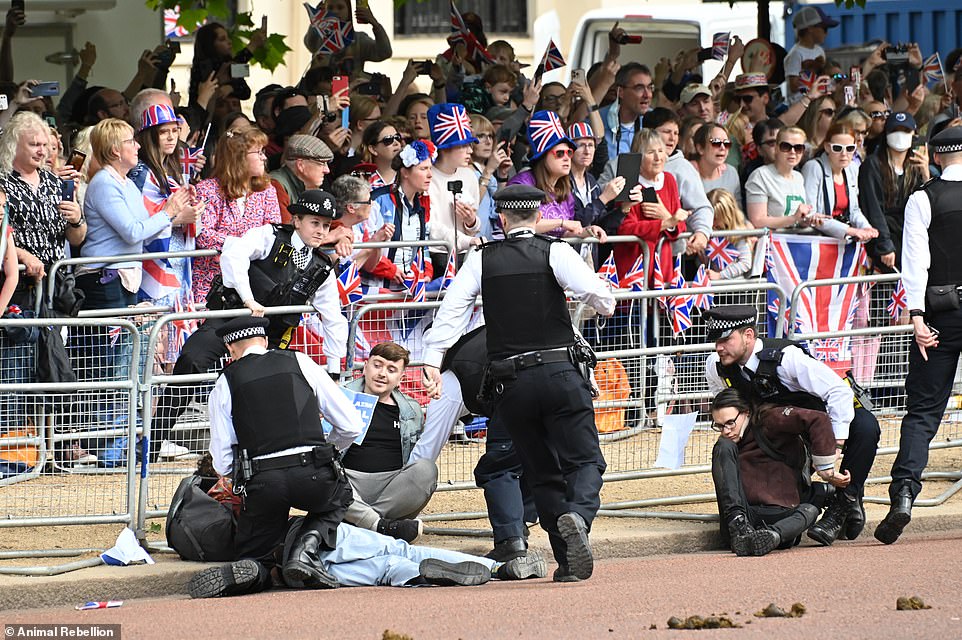 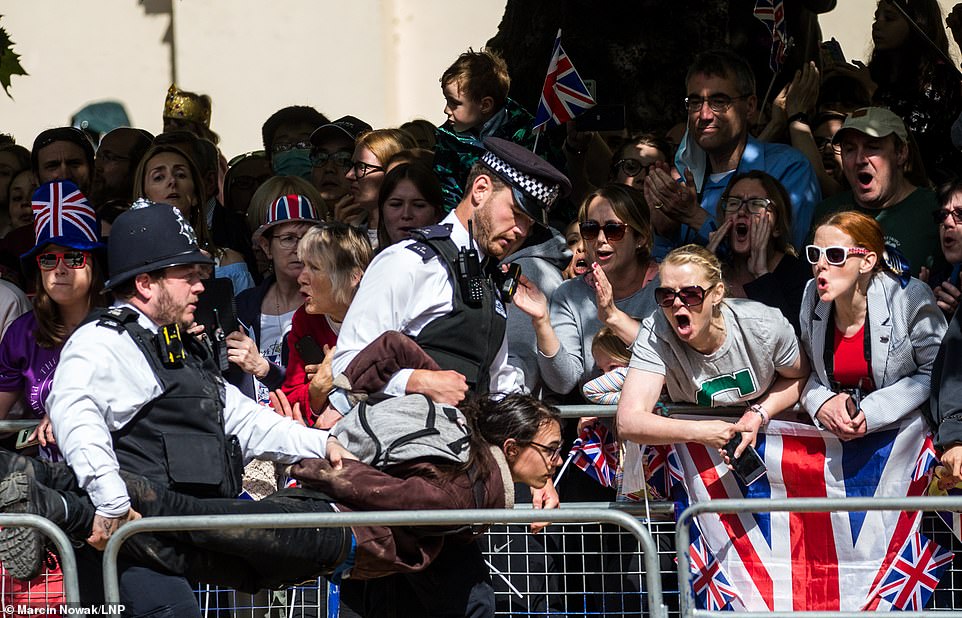 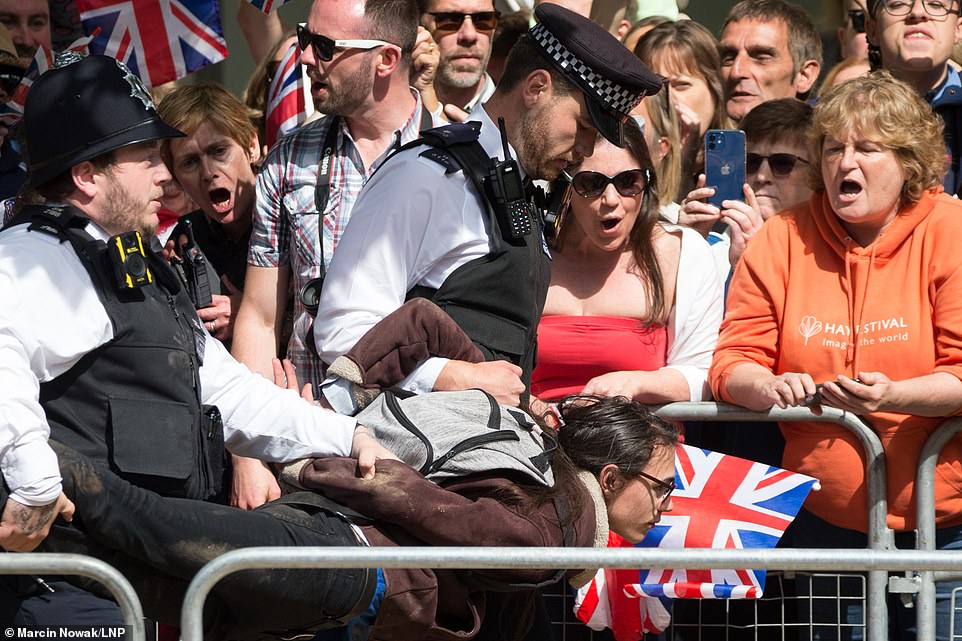 Fury of the Queen fans: The protester received more boos and objections as they were lifted by police officers away today 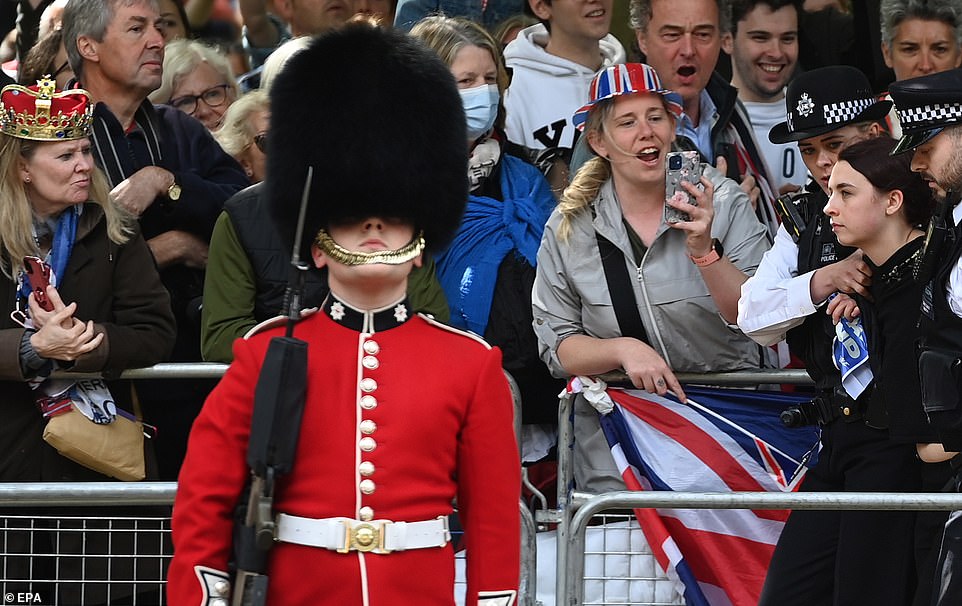 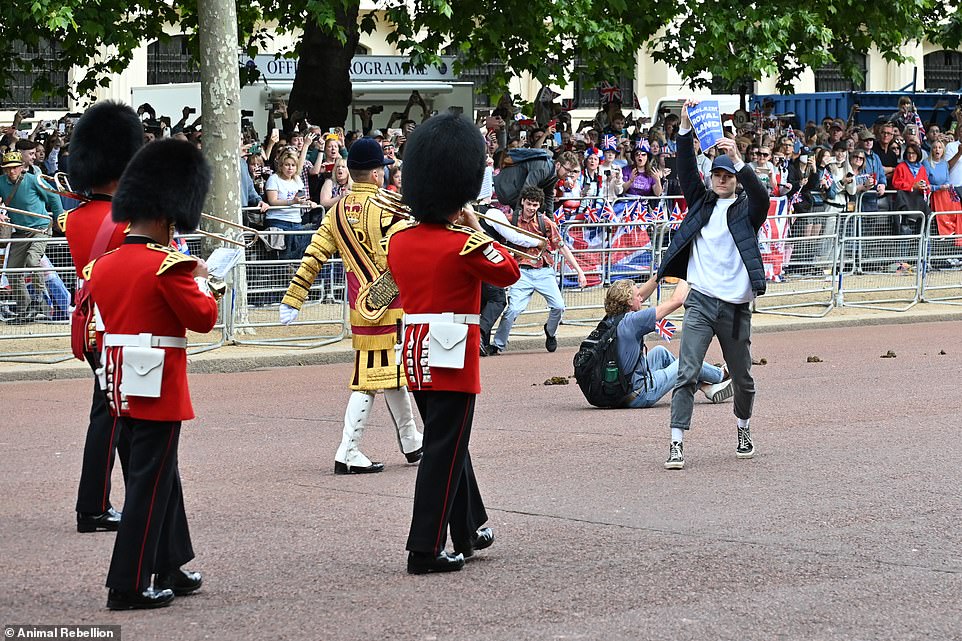 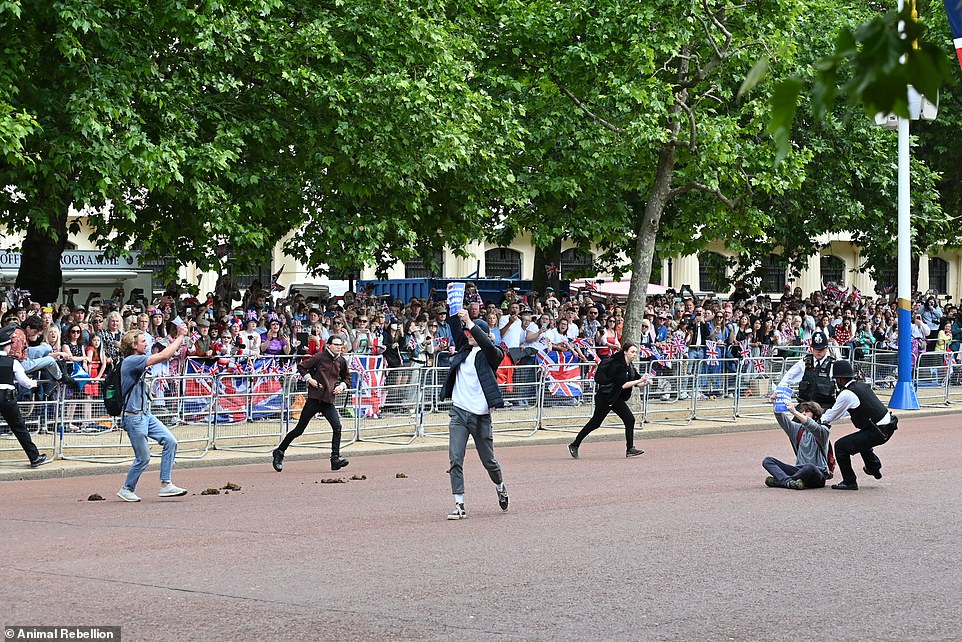 The protesters say they mounted the action over the Crown’s alleged inaction on the climate emergency and their continued support for meat, fishing, and dairy, a leading contributor to climate breakdown

‘This summer, we’re taking bigger action against the Dairy industry than ever before, and we need you.’

They posted on Instagram the moment they vaulted over the fences into the road.

The activists have accused the Crown – one of the largest land owners in the country – continuing to support the meat, fishing, and dairy industry.

Protesters say these sectors and industries are leading contributors to the climate crisis.

A spokesman for the Metropolitan Police said: ‘A number of arrests have been made of people who attempted to enter the ceremonial route in The Mall at approximately 10.10am today.

‘The arrests were public order related for highway obstruction.’

Thousands of people draped in Union Jack flags, party hats and plastic tiaras are lined the Mall in the warm sunshine to watch the Trooping the Colour. 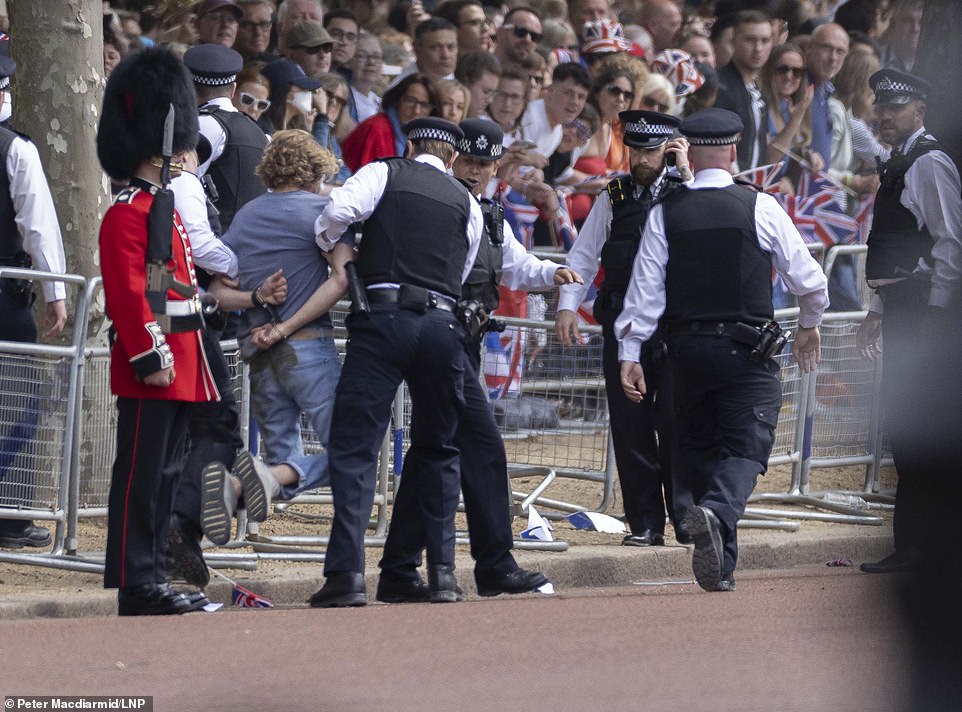 Animal Rebellion proudly tweeted: ‘This summer, we’re taking bigger action against the Dairy industry than ever before, and we need you!’ 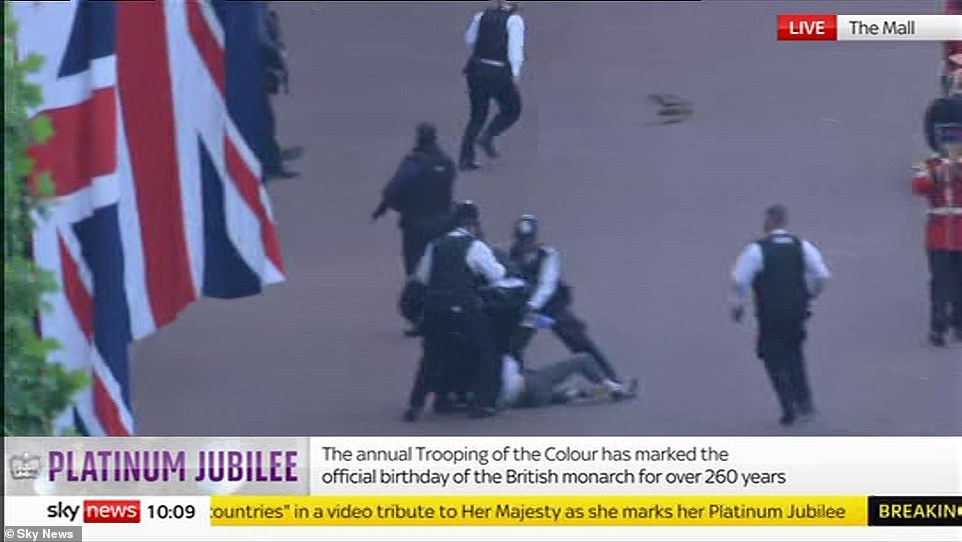 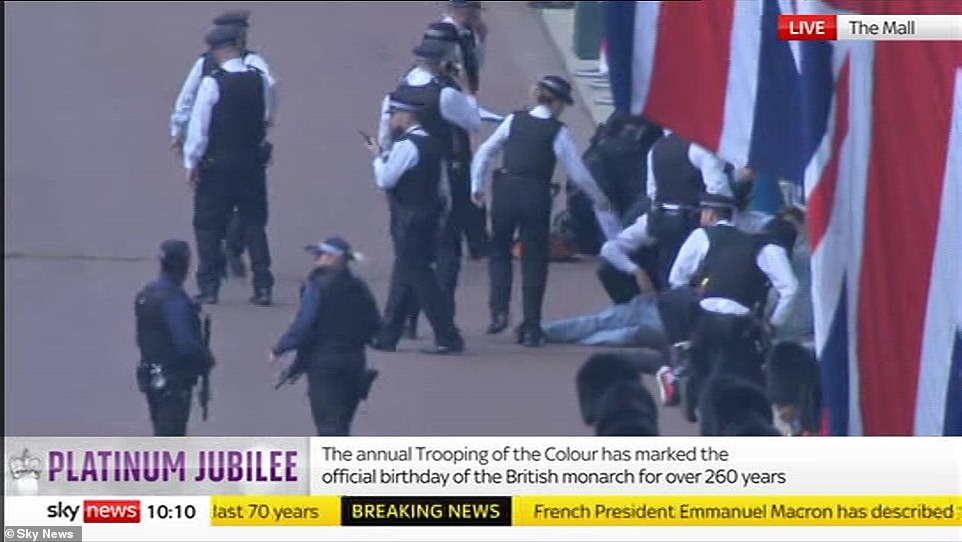 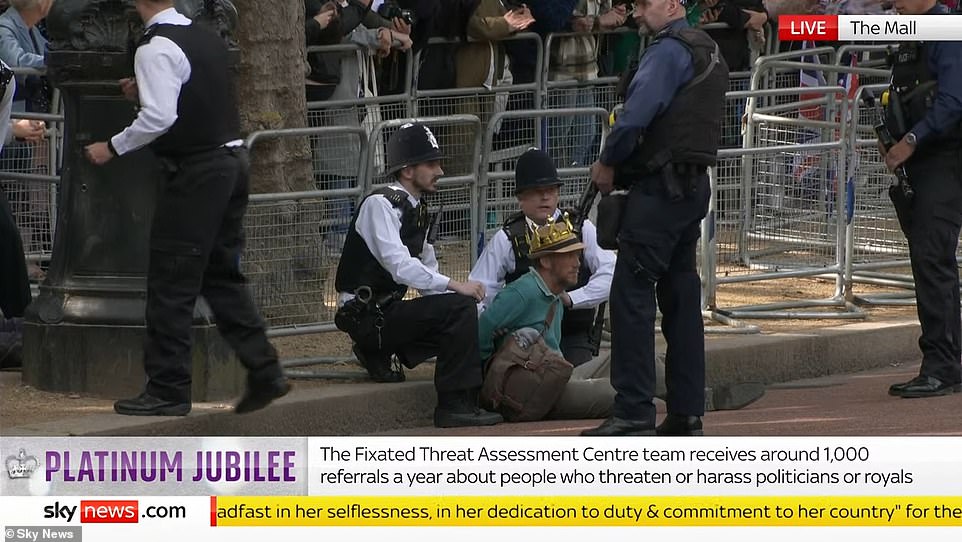 Some of those at the front brought camping chairs, having arrived as early as 8pm on Wednesday to get the best spot.

Spirits were high among the crowds as members of the public chatted and joked with police maintaining the perimeter.

Several handmade signs hung over the barriers, with one simply saying, ‘thank you’.

Devoted royalists will watch from the famous street leading up to Buckingham Palace from Trafalgar Square for the traditional Trooping the Colour.

The military ceremony – which has been used to mark a British Monarch’s official birthday for 260 years – will be carried out by 1st Battalion Irish Guards, plus more than 1,500 officers and soldiers from the Household Division.

Prince Charles will take the Salute, joined by Prince William, a Colonel in the regiment and Princess Anne.

Royal fans across the country who aren’t lucky enough to have a space along The Mall can watch events unfold on huge screens in nearby St James Park, or in Princes Street Gardens in Edinburgh or Bute Park in Cardiff.

More than 350 horses and hundreds of military musicians will be involved in the procession, in which members of the Royal Family will travel on horseback and in carriages down the Mall to Horse Guards Parade, where the ceremony takes place.

In a show of the resilience that has marked her record-breaking reign, the Queen has vowed to make two appearances on the Buckingham Palace balcony today, the first day of her Jubilee celebrations.