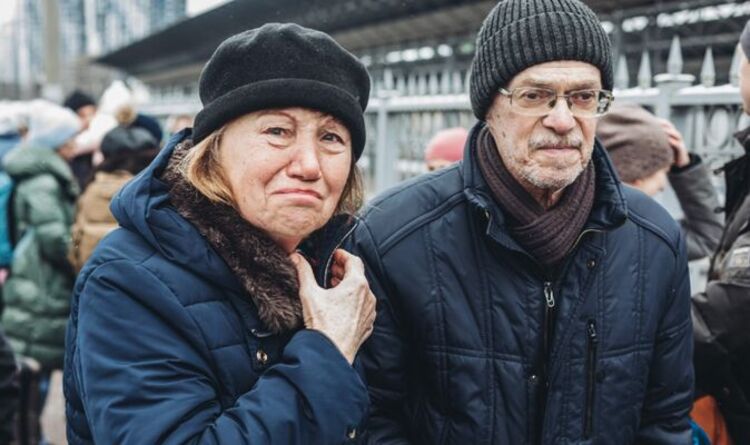 Russia warned those living in the city to leave their homes or risk becoming victims of strikes on crucial intelligence targets in the city. The Russian defence ministry said on Tuesday: “We urge Ukrainian citizens involved by Ukrainian nationalists in provocations against Russia, as well as Kyiv residents living near relay stations, to leave their homes.”

It added that strikes would focus on the Security Service of Ukraine and the 72nd Center for Information and Psychological Operations.

Footage from the central train station in Kyiv showed hundreds of panicked people, often with young children in tow, packing onto overflowing trains as civilian areas are increasingly targeted.

This comes as satellite imagery highlighted the convoy of Russian military vehicles, stretching up to 40 miles long, just outside of Kyiv.

There are reports of a second convoy approaching the city from the southeast in a movement designed to entrap the capital.

Ukrainian officials have said Russia is continuing to intensify bombing and shelling of Ukraine’s biggest cities, after days of attacks wreaked havoc on the country’s second-largest city, Kharkiv.

On Wednesday, regional governor for Kharkiv, Oleg Synegubo, said that at least 21 people were killed and 112 were wounded in shelling in Kharkiv in the last 24 hours.

Ukrainian authorities also said on Wednesday that a further five people had died after a Russian attack on a television tower in Kyiv.

It is believed the five people were members of the same family.

The TV tower, reaching 1,300 feet, was circled by explosions on Tuesday afternoon, and was constructed by a memorial site for a Nazi massacre.

Ukraine accused Russia of a “barbaric” attack, using rockets to kill five civilians who were walking nearby to the memorial.

In September 1941, soldiers from Nazi Germany executed tens of thousands of people in the woods near the memorial.

Ukrainian President Volodymyr Zelensky then said: “What is the point of saying ‘never again’ for 80 years, if the world stays silent when a bomb drops on the same site of Babyn Yar?

The death toll remains unclear, as civilians scramble to the borders of neighbouring countries.

A UN agency has said that at least 136 civilians have been killed so far, and over 400 injured.

Liz Throssell, a spokesperson for the UN Human Rights Office, added: “The real toll is likely to be much higher.”