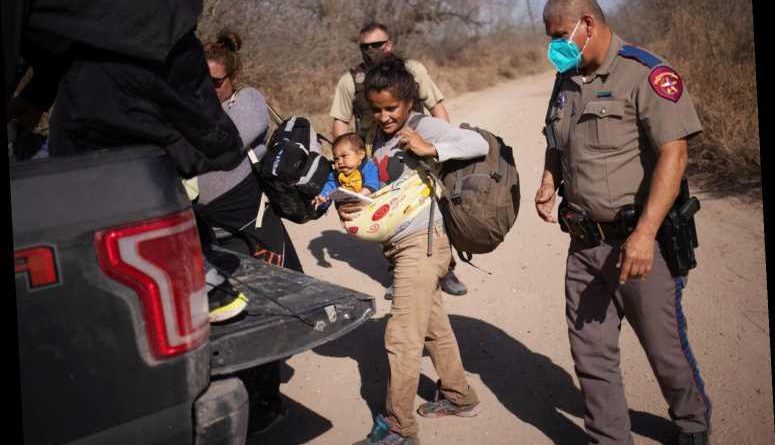 THOUSANDS of migrants who have been surging into the US have overwhelmed government agents after Trump warned Biden to end "border disaster."

According to a CBS report, asylum seekers in one of the camps on the Mexican side of the border were told they would be able to enter the US to wait out the asylum process.

Mexican authorities have been trying to shut down the improvised camps set up by migrants trying to cross the border into the US.

Over the past month the US Border Patrol arrested around 340 children who crossed the US-Mexico border alone, CNN reported.

According to the report, the Office of Refugee Resettlement said they have been processing an average of 337 children per day.

In January, more than 4,000 unaccompanied minors arrive in the US, a 19 per cent increase since last year.

It's the highest number recorded since February 2019, when the agency recorded 5,900 minors.

Earlier this week Donald Trump blasted Joe Biden over the "spiraling tsunami at the border" and warned "criminal" are surging into the United States.

Trump released a statement on Friday afternoon, stating the border is "totally out of control thanks to the disastrous leadership of Joe Biden."

Trump went on to boast of his "great relationship" with Mexico and "it's wonderful president," insisting that has been "dissipated by the gross incompetence and radicalism of the people currently in charge."

"Our great Border Patrol and ICE agents have been disrespected, demeaned and mocked by the Biden Administration," Trump said.

He added that a "mass incursion" is happening with immigrants coming into the country and claimed "many have criminal records, and many others have and are spreading covid."

He suggested that Biden finishes off the border wall that Trump created between the US and Mexico, insisting "doing so will save thousands of lives."

The statement concluded with a direct request from the 45th president.

"The Biden Administration must act immediately to end the border nightmare that they have unleashed onto our Nation.

"Keep illegal immigration, crime and the China Virus out of our country!"

The statement came just hours after it was revealed that Biden asked senior officials to travel to the US-Mexico border and brief him on the influx of children, a White House spokesman said on Thursday.

Biden’s administration is facing criticism from Democrats and activists who say unaccompanied migrant children and families are being held too long in detention centers instead of being released while their asylum applications are considered.

When asked about Trump's remarks, White House Press Secretary Jen Psaki said: "We don’t take our advice or counsel from former President Trump on immigration policy, which was not only in humane but ineffective."

She added: "“We’re gonna chart our own path forward, and that includes treating children with humanity and respect and ensuring they're safe when they cross our borders.”