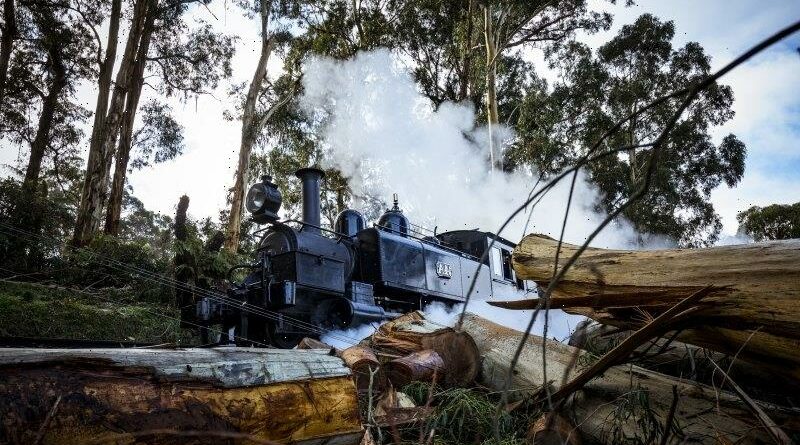 Four thousand homes remain without power in the storm-ravaged Dandenong Ranges as the state government offered small generators to affected homes and finally called in the army to help with the clean-up effort. 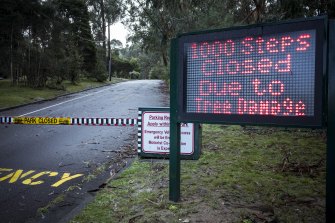 The 1000 Steps has been closed after it was badly damaged in wild storms.Credit:Chris Hopkins

ADF Brigadier Matt Burr said the new troops, who will join five ADF logistics experts who were called into help last week, would assist the Victorian agencies leading the clean-up.

“The tasks that the ADF will be performing will be tree removal, where people hadn’t been able to access their properties, and certainly assisting with making those areas safer for the community,” he said.

He said six advice warnings across the state were still current, with rainfall of up to 46mm at places like Mount Wellington on the edge of the Victorian Alpine region.

“While there were not strong winds up in the Dandenongs overnight, there were another two trees that came down on the Mount Dandenong Tourist Road which was closed,” Mr Crisp said.

“So it’s yet another reminder that the conditions, particularly in (closed parts of) the Dandenongs with those trees, is perilous. There is still some danger in relation to the environment.”

But there there is also some light at the end of the tunnel for residents of the area.

Electricity provider AusNet confirmed on Saturday they hoped to reconnect 3200 by the end of the weekend, while the steam whistle ringing out through the mountain air was a welcome small return to normality. 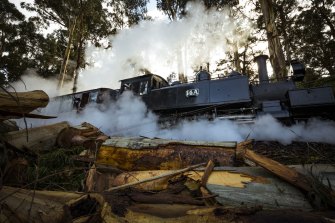 The welcome sound of Puffing Billy returned to the storm-ravaged area this weekend.Credit:Chris Hopkins

Puffing Billy reopened between Belgrave and Emerald this weekend, after more than 70 trees fell across the line in last Wednesday’s storms.

Chief executive Peter Abbott said the tourist train was “just starting to get some momentum” before the snap lockdown in late May, with businesses now reeling again after the storms.

Mr Abbott said staff and 20 volunteers – many of whom were still fixing damage at their own homes from the wild weather – worked non-stop to ensure the line was safe for use again.

“We were probably reasonably lucky in that there was no significant damage to buildings or trains or carriages. It was trees across the line but anyone who knows the area knows the trees up here are not small ones,” he said. 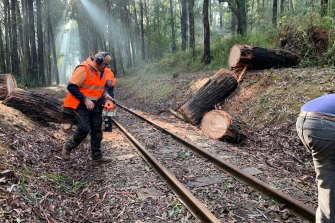 “Puffing Billy is iconic with the Dandenongs and you know all the traders and tourism businesses rely on the visitors that come up on the train.

“We want to bring tourists to the businesses up here because we’ve all been through COVID shutdowns – we’re all still recovering from that – then the storm damage was so difficult for everyone.”

Mr Abbott said works were continuing so the line could be opened up all the way to Gembrook before the school holidays start when school bells ring on Friday afternoon.

Mr Crisp also sent a strong warning to people who want to “sticky-beak” in storm-affected regions that are only open for local access: stay away. 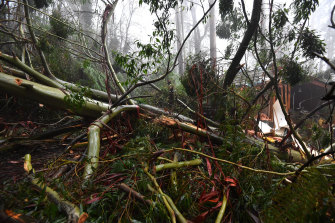 Storms wrought widespread destruction in Olinda and other parts of the Dandenongs, east of Melbourne, last week. Credit:Joe Armao

The state government also announced on Saturday morning that they would provide 200 small generators to Victorians who would be without power until mid-July.

Energy Minister Lily D’Ambrosio said they expected at least 1400 properties were expected to be without power until July 10.

“I put a caveat on this because we know of course that we expect to see high winds coming through parts of the state including the Dandenong Ranges, and with that more trees coming down that have already become vulnerable and weakened by the storm event,” she said. 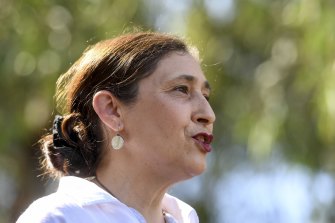 Ms D’Ambrosio also said there had been 100 applications for hardship payments of $1600 following the storms.

Late on Friday night, health authorities declared drinking water in Sherbrooke, Kallista and The Patch safe to consume. But residents were warned to flush their taps for at least two minutes to ensure fresh supply through their pipes.