Terrorist organisation Islamic State Khorasan has claimed it fired six rockets at Kabul airport in an attack that did not cause any casualties and was partially intercepted by US forces.

And the United States military said it was assessing the results of an earlier drone strike it launched on IS-K militants which resulted in the deaths of civilians in the Afghan capital. 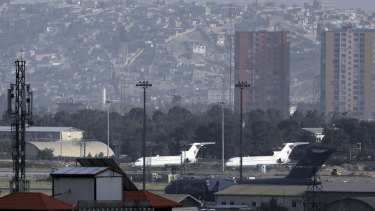 Aircraft are parked on the tarmac of the Hamid Karzai International Airport in Kabul, Afghanistan.Credit:AP

The Washington Post reported that a single extended family, including children, were among the ten dead from the US drone attack.

According to witness Abdul Martin Azizi, a neighbour of the victims, the family was getting out of their car in their driveway when the strike hit a nearby vehicle at around 4.30pm local time.

“The bodies were covered in blood and shrapnel, and some of the dead children were still inside the car,” he told the Post.

It was one of two US drone strikes aimed at IS-K that is reported to have killed civilians.

“We are not in a position to dispute it right now, we’re assessing and we’re investigating,” the Pentagon’s John Kirby told a news conference early on Tuesday.

“Make no mistake, no military on the face of the earth works harder to avoid civilian casualties than the United States military,” he said.

“We didn’t want to see happen, what we believe to be a very real, a very specific and a very imminent threat to the Hamid Karzai International Airport and to our troops operating at that airport as well as civilians around it and in it and that was another thing that we were very, very concerned about.”

IS continued to target US troops with a volley of rocket attacks.

Their latest attack, following Thursday’s fatal suicide bombing outside the airport which killed at least 169 Afghans and 13 US service members, was launched on the eve of the United States’ exit from the country.

The US has evacuated 122,000 people since the Taliban’s stunning sweep to power last months. 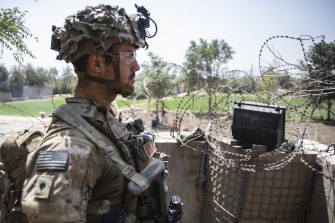 A US Army paratrooper of the 82nd Airborne Division stationed at Hamid Karzai International Airport in Kabul.Credit:AP

Monday’s attack did not prevent any flights of C-17 military cargo planes.

The United States has until Tuesday to leave Afghanistan, under the terms of the deal struck by former President Donald Trump.

While the Taliban has vowed not to attack the United States as it finalises its departure, its exit has been marred by chaos and most recently violence with the local arm of Islamic State – IS-K – launching attacks on the airport.

IS-K made the claim of responsibility for Monday’s attack via its media arm Aamaq propaganda outlet which distributes messages on the messaging app Telegram. 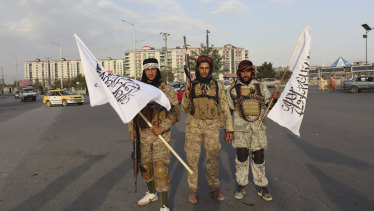 It said it fired six Katyusha rockets at the airport. Some struck a neighbourhood close by.

One rocket landed inside the perimeter of the airport but “had no effect whatsoever,” according to the US military.

Evacuations continued with a further 26 US military flights carrying 1200 people, and a pair of coalition flights carrying 50 people departing in the last 24-hour period, bringing to more than 116,000 the number of those evacuated since August 14.

Concerns are mounting as to how to secure the safe passage of those who have not been able to leave, once the US leaves and the Taliban takes control of the airport.

In New York, the United Nations Security Council demanded in a vote on a resolution “that every effort be made to allow for the rapid and secure reopening of the Kabul airport and its surrounding area”.

The resolution was put forward by the US, France and the UK and passed by 13 member states but China and Russia abstained, although did not use their veto powers to block the vote.

It quoted the Taliban pledge that Afghans will be able to leave the country by air and ground for any reason.