Three asylum seekers from Syria and Palestine have been sentenced to jail for an attempted arson attack on a synagogue in Gothenburg, southern Sweden, in December last year.

CCTV footage from the attack, which took place while some 30 youths were attending a Hanukkah party in the synagogue, shows more than a dozen masked men throwing Molotov cocktails at the building and nearby cars.

However, just three men, aged 19, 22 and 24, were arrested and charged in connection with the incident.

The arson attack took place just days after President Donald Trump had announced that the U.S. would recognise Jerusalem as Israel’s capital. 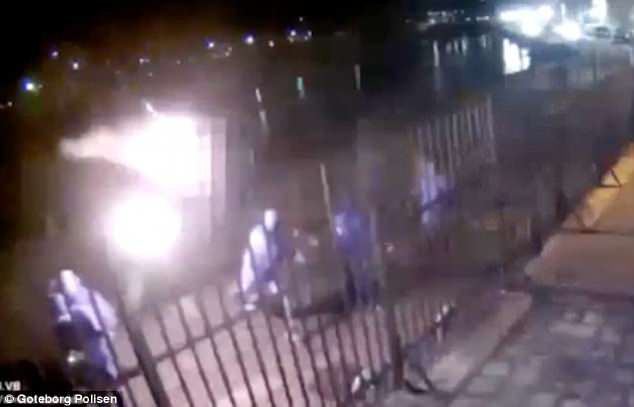 Attack: CCTV footage from the attack on the synagogue in Gothenburg in December shows a dozen assailants, however just three men have been jailed

Court documents state that at least six Molotov cocktails – glass cider bottles filled with flammable liquid – were thrown at the synagogue on December 9, 2017.

Between ten and 20 masked men were involved in the attack, which took place just after 10pm.

The prosecution argued that the charges were aggravated by ‘the crime’s motive to violate an ethnic group because of its beliefs’.

The young Jewish people celebrating Hanukkah in the building, briefly took shelter in a cellar during the attack, but no one was injured.

The court added that the attack’s ‘purpose was to threaten, harm and violate both the members of the Jewish community and the Jewish people as a whole.’ 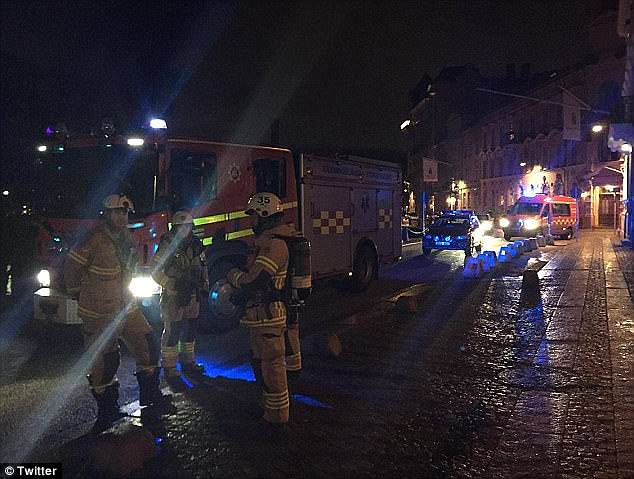 Jailed: Three asylum seekers, aged 19, 22 and 24, from Syria and Palestine, have been sentenced to prison for the attack. Pictured are emergency services at the scene in December

One of the men had googled the synagogue’s location on the day of the attack, the prosecution said.

The 19-year-old Syrian man was sentenced to one year and three months for threats and attempted criminal damage.

The two Palestinian nationals, aged 22 and 24, were each sentenced to two years in prison.

The Syrian teen and the 24-year-old, a Palestinian national from Syria, had already been given permanent residency in Sweden and the court ruled that the crime is not considered severe enough to warrant deportation.

The 22-year-old had his asylum application rejected and will therefore be deported after serving his sentence.

There are around 20,000 Jews living in Sweden, according to the Official Council of Swedish Jewish Communities.

The Swedish National Council for Crime Prevention says there have been between 150 and 280 anti-Semitic acts, including threats, insults and violence, each year in the past decade.