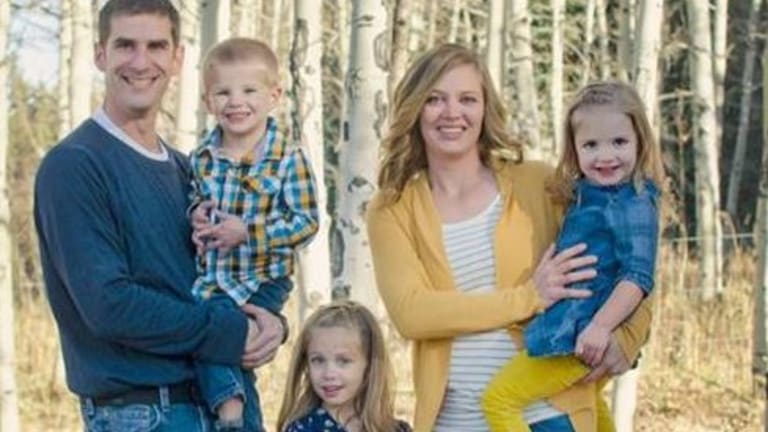 The McIver family shared their story after one of their daughters became stuck in a washing machine.

United States It's not unusual for Lindsey and Alan McIver's children to get up before them.

Most mornings, the kids entertain themselves for about 10 to 15 minutes, colouring and playing, before going to wake their parents, Lindsey McIver told The Washington Post.

But on Tuesday last week, the Colorado couple were awakened by their panicked four-year-old son Jace, crying so hard he could barely speak.

Lindsey and Alan were only able to make out three of Jace's words: Kloe. Inside. Washer.

In a Facebook post that has since been shared more than 300,000 times, Lindsey detailed the harrowing experience of rescuing her three-year-old daughter Kloe.

"I post this because I can honestly say we did not realise the danger of this machine," Lindsey wrote. "We are continually surprised at the new, inventive ways our kids come up with to try and die. And this was definitely a new one."

It all began with two curious kids and a shiny new washing machine.

Despite telling their children to stay away from the washer, Lindsey said she believed Kloe climbed in and Jace shut the door, pushing the machine's buttons while his sister was inside.

Running down to the basement laundry room, the McIvers entered a nightmarish scene. Through the washer door's clear window, they saw Kloe tumbling around as water poured in around her.

"I could tell she was screaming, but the machine's airtight," Alan told Good Morning America in an interview on Monday. "I yanked on the door, I pulled so hard I moved the machine from the wall, but it's locked, you can't get it open."

They had just bought and installed the washer the day before and weren't familiar with how it worked, Lindsey told The Post. After pulling on the door didn't open it, Lindsey said her husband started pushing buttons on the machine, eventually pressing pause followed by power. The door unlocked. Kloe was freed.

"It was terrifying," Lindsey said. "Since it was a new machine we weren't positive on how to use it or unlock it. We knew it locked, but we didn't know if we would even be able to get it back open at that point, so we were just grateful to be able to figure out how to open it and get her out quickly."

Aside from some small bumps on her head and wet clothes, Kloe had escaped from the washer relatively unscathed, according to the Facebook post. But the toddler learned her lesson.

"She just said 'We better not do that again,'" Lindsey said.

While the McIvers's story ended with relief, rather than tragedy, other children who have crawled into washing machines have not been so lucky.

Two years ago, a three-year-old girl in Arkansas climbed into a washing machine and shut the lid. In that case, the machine was programmed to start once the lid was closed and the girl was killed. In January, a five-year-old Japanese boy suffocated inside a front-loading washing machine after closing the door and getting trapped.

The McIvers were aware that their situation could have easily been another tragedy, Lindsey said.

"As I understand, if it's farther along in the cycle it may not unlock at that point," she said. "We were able to catch it right at the beginning."

Lindsey said she decided to share her story because she wanted other parents to be aware of the dangers posed by appliances, such as washing machines.

"I hadn't heard any stories about things like that happening," she said. "The thought never even crossed my mind."

In the Facebook post, Lindsey wrote that her washer's door now has a physical child lock on it and the machine's child lock feature is enabled. All LG washers come equipped with the safety feature, Taryn Brucia, director of public relations for LG Electronics told the Today Show.

When activated, the machine cannot be used, according to Brucia.

In a statement to ABC News, the company said that it encouraged people to use the "important safety setting".

"We applaud Ms McIver for telling her story and share in her efforts to make sure that consumers are aware of the child safety lock feature," the statement said.

Since the washer was so new, Lindsey wrote that she and her husband had not even had a chance to use the machine or examine its various settings before Kloe was trapped.

However, Lindsey said she discovered that the child lock setting on her model of washer doesn't keep the door from opening, so children can still get stuck inside. She added that it was important for parents to take additional preventive steps such as locking laundry room doors or child-proofing washer doors.

"Kids are just so curious and energetic and they don't always understand the dangers associated with things," she said. "They're just learning by exploring their environment. It's always, I think for every mum, a challenge."