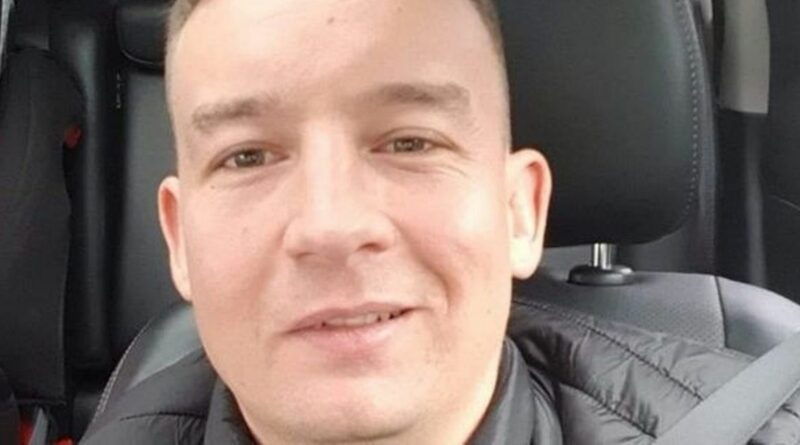 A thug drove over a man after trying to run down his ex girlfriend in a car – and then struck her with a tyre wrench.

Luke Scanlon, 32, had been in a relationship with the woman, and the couple had a child together before splitting up.

After a night out, his ex-girlfriend's new partner was walking home when he noticed a car following him – he quickly realised it was Scanlon, Minshull Street Crown Court (Manchester) has heard.

Scanlon, of Oldham in Greater Manchester attempted to run him over but he fled and called his partner, who then called Scanlon and told him where she was, Manchester Evening News reports.

His partner and a number of others were waiting on a street called Shaw in Oldham when they saw his car ‘flying’ round the corner.

Scanlon then attempted to run his ex down, but a man intervened and instead was struck by the car which sent him ‘flying into the air’, before he was driven over.

As Scanlon tried to drive off, the man managed to stand up, but Scanlon reversed and hit him again, dragging him underneath the car.

The man managed to flee and hide behind a garden wall which Scanlon crashed into, the court heard.

He then ran towards his ex carrying a tyre wrench, struck her to the leg and in the same breath said: “You’re dead… I love you”.

Scanlon pleaded guilty to causing serious injury by dangerous driving and assault occasioning actual bodily harm and was today (May 14) jailed for three and a half years.

Prosecuting, Matthew Curtis said on May 25 2019 Scanlon had dropped his children off at his mother’s house in Birmingham where they were to stay for the week, whilst his former girlfriend made arrangements to go out for the evening.

During the night she had an argument with her then-boyfriend and he walked home.

He realised it was Scanlon, who then drove towards him 'at speed', but he managed to get inside a block of flats where he rang his girlfriend.

She then rang Scanlon and revealed where she was, it was said.

“When the group were still outside, they saw and heard the defendant’s car ‘flying’ around the corner onto Refuge Street – it made a screeching noise,” the prosecutor continued.

“The defendant drove towards her, closing a distance from about 20 metres, but she moved out of the way.

“He then drove on to the car park of the Aldi supermarket opposite, made a sharp turnaround, and then drove at Chloe a second time.

“This time, fearing he was going to hit Chloe, one of the men ran over and managed to push her out of the way.”

He was then hit by the car twice and dragged underneath before managing to get up and run away.

Scanlon revved his engine and drove at him, but the man jumped over a garden wall which Scanlon then crashed into.

Having got out of the car, he then ran at his ex and swung the wrench at her leg causing her to fall.

As she lay on the floor he swung the weapon back but stopped as her boyfriend ran towards him and told her: “I love you, but I could kill you”.

Half an hour later he sent her a series of text messages suggesting that he wanted to deliberately hurt her without the children there to witness it, the prosecutor added.

The man was left with several injuries including a 12 centimetre by 7.5 centimetre burn to his right forearm, bruising and grazes on his legs, three large lumps on his back and scarring.

His ex-partner recovered quickly from her injuries.

In a victim personal statement, the man said: “Since May 2019 I have lived in hell, people don’t understand the trauma I have been put through.

“This was not a moment of madness it was something a whole lot more.

“For life I have a fear of screeching cars and I constantly wake up sweating.”

His ex-girlfriend said that if it wasn’t for the children she would have a restraining order.

Scanlon was said to have a number of previous convictions for battery, possessing drugs, affray, assaulting a police officer and most recent drink driving in 2020.

Mitigating, Adrian Farrow said his client has a long standing condition of anxiety and depression.

“He thought he had been lured there,” he said.

“His reaction was inappropriate and disproportionate and he sincerely regrets it.”

Sentencing him, Judge John Potter said: “That night you were dangerously driving your car as a weapon to inflict serious injury.

“You then armed yourself with another weapon and caused harm to a second victim and the mother of your children.

“You chose to put yourself in the situation you found yourself to be in that night.”

Scanlon was jailed for three years and six months and disqualified from driving for five years and seven months.