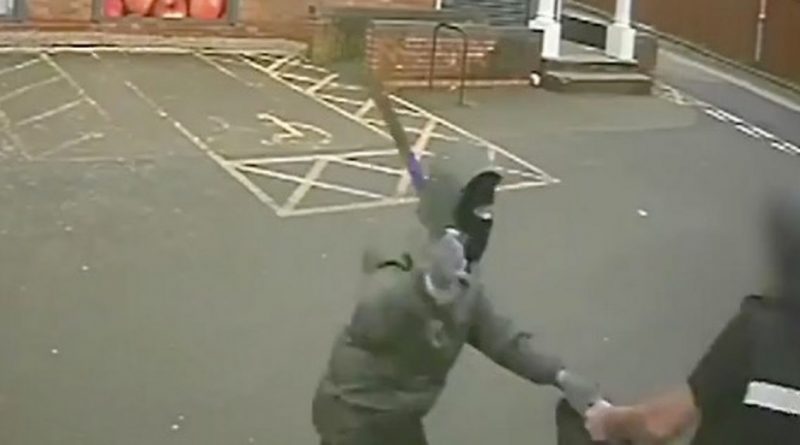 A horrifying video shows a pair of thugs attack a cash guard with a machete, with the ordeal caught on his body-worn camera.

Adrian Treleven and his driver, Remelle Stewart, used increasing levels of violence as they targeted workers transporting money – but got away with nothing despite striking three times.

In the clip, the guard runs for his life but isn’t able to get into his van before the hooded and masked men set upon him with the huge blades.

He screams as the men hit him three times with the machetes, just as a car pulls into the car park where he is being attacked.

The clip then shows him charge at one of the attackers, armed only with a briefcase.

He fends off the man, who flees in a getaway car.

The attempted robbery happened at a Co-op in Huntingdon, Staffordshire, on March 10 last year.

In an earlier shocking attack, on February 21, they knocked a guard to the ground outside a branch of TK Maxx in Walsall’s Crown Wharf Retail Park.

They were forced to flee empty-handed as a member of the public rushed to help the victim.

Just three days later, another guard had just made a collection from the Toby Carvery on Chester Road North in Sutton Coldfield when he felt Treleven grab him from behind and onto the ground.

As Stewart closed in the getaway car, Treleven raised his fists to fight the victim,

When the victim refused, he ran to the car and shouted to the driver: "Run him over! Run him over!"

At Birmingham Crown Court on Monday (11 January), Treleven, 26, of no fixed address, was given 14 years after admitting conspiracy to rob.

Stewart, 18, of Church Vale, Handsworth, was jailed for four years after admitting the same charge.

He was said to be under the control of Treleven, and was just 17 at the time.

In a statement on Twitter, West Midlands Police said: "Horrifying footage of a machete attack on a cash security guard can be released today, as a pair behind a violent spree of failed robberies begin prison sentences.