Golfer Tiger Woods was on hand with girlfriend Erica Herman, son Charlie and daughter Sam in Queens on Monday to see Rafael Nadal come back and beat Marin Cilic to advance to the US Open quarterfinal.

‘Just an incredible performance and awesome way to close out the match,’ Woods wrote on Twitter after Nadal’s four-set win.

Nadal posted a picture of himself and Woods on Instagram following the match.

‘Always an inspiration for me,’ read Nadal’s caption. ‘Thanks for coming today to the tennis, Tiger!!!’ 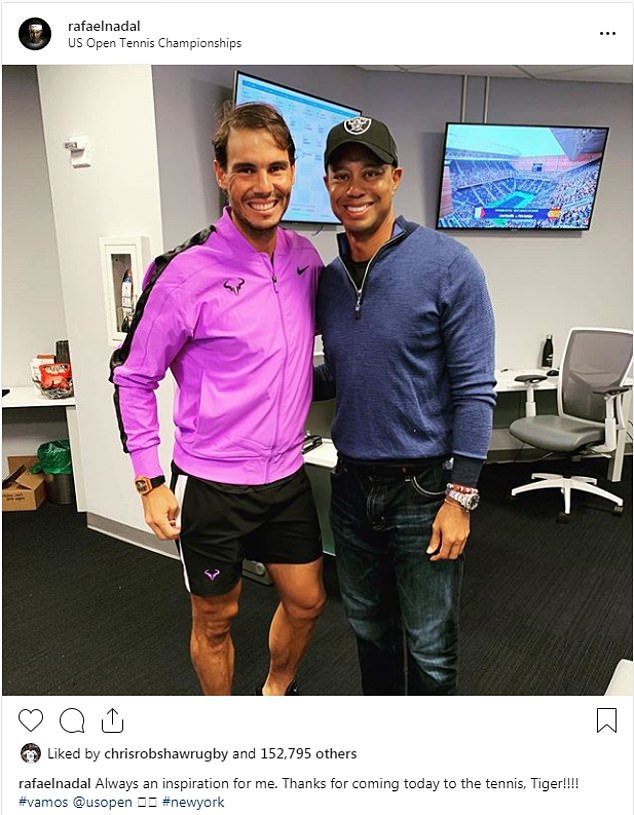 Nadal was asked about Woods during his post-match interview.

‘I always said I never had big idols, but if I had to say one, one idol is him. I always tried to follow him every single shot that he hit during the whole year.

‘For me, it’s a big pleasure to have him here supporting. Means a lot. He’s a big legend of the sport, one of the greatest sportsmen of all time. I just want to congratulate him for one of the more amazing comebacks in sport, winning the Masters this year.’

Nadal was also asked if he has received any golf tips from Woods, who was seen wearing an Oakland Raiders hat in Flushing on Monday night.

‘Honestly, it’s much better if Tiger doesn’t see my swing,’ Nadal said. ‘Maybe he can lose a little bit of rhythm after that.’ 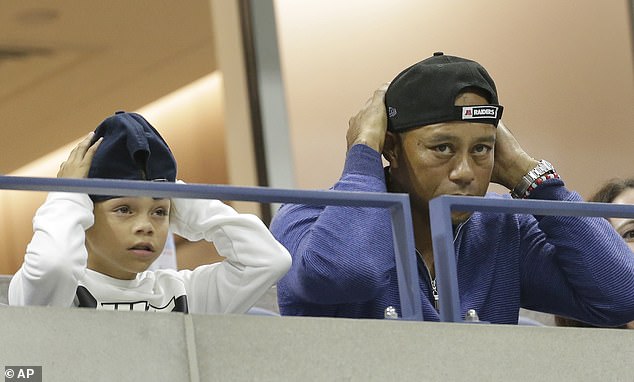 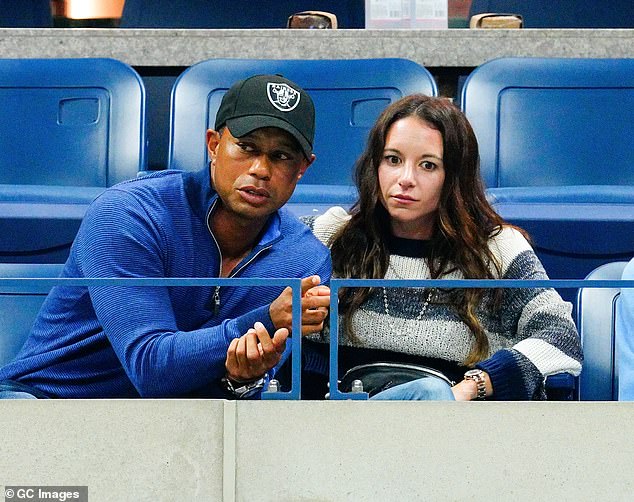 Woods is currently in the midst of another layoff after having surgery to repair the cartilage in his left knee. He hopes to be playing again by early October.

The 43-year-old has endured five knee operations and another four surgeries on his back.

With the win, Nadal moved a step closer to another with Roger Federer.

Nadal was clearly irritated when given a time violation as he served midway through the second set, and was broken moments later. 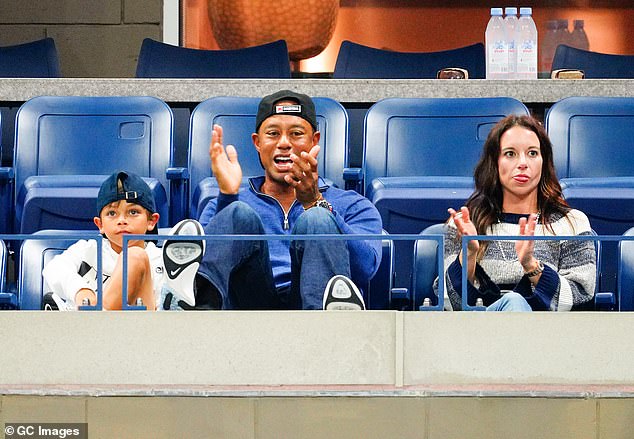 But the three-time champion quickly shrugged it off to march into the last eight, with a stunning around-the-net winner bringing up match point to the delight of Woods.

‘It’s an easy shot to describe, but difficult to make,’ said Nadal. ‘I don’t know, I think I followed the ball good because he had a good volley and I saw it.

‘I ran fast to the ball and I saw at the last moment there would maybe be a small space on that side.

‘I think it was the only way to win that point. I hit it well, but to hit that spot you need some luck.’

It is a statistical quirk that Federer and Nadal, rivals across 15 years and 40 matches, have never met at the US Open.

But defending champion Novak Djokovic’s exit has opened up the possibility of a box-office final between the pair. 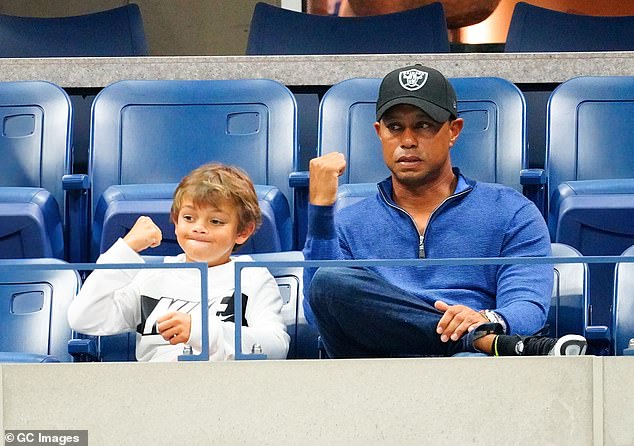 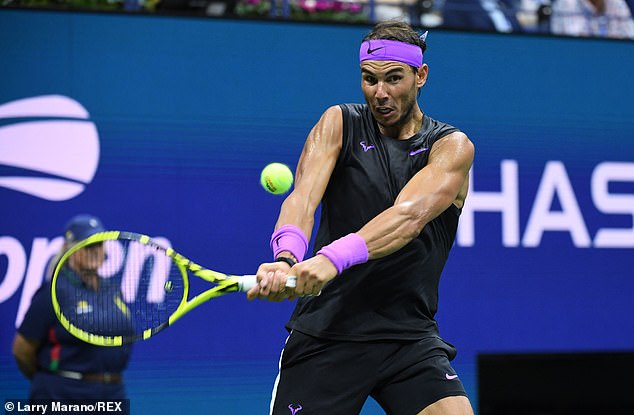 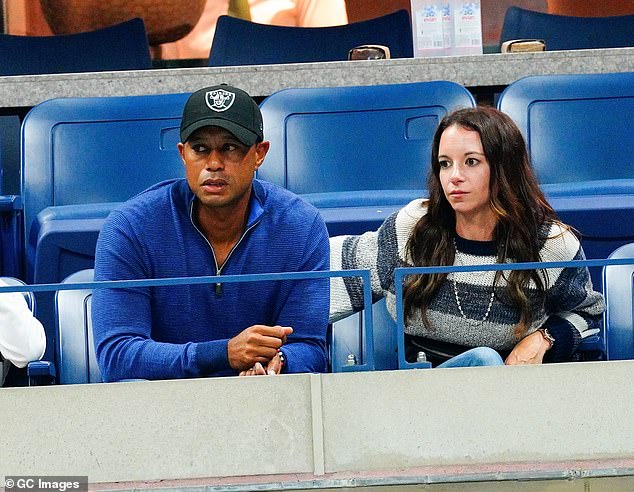 Federer faces Grigor Dimitrov, a player he has beaten seven times out of seven, in the last eight.

Nadal will take on Diego Schwartzman after sixth seed Alexander Zverev ran out of steam in his bid to reach the quarter-finals for the first time.

The 22-year-old had already played 14 sets in three matches before taking on Schwartzman in round four.

He took the first set but Argentinian Schwartzman hit back to win the next two.

There was controversy when Zverev was given a point penalty after an audible obscenity, giving Schwartzman a 5-2 lead in the fourth.

Umpire James Keothavong had earlier issued a warning when Zverev smashed a ball away, but the German claimed he had not heard it.

‘I mean, a code violation is fine. I didn’t even argue that,’ he said. ‘But neither of us heard me getting a warning in the first place.

‘So it was like, OK, a warning is fine, it’s no problem, but why am I getting a point penalty? 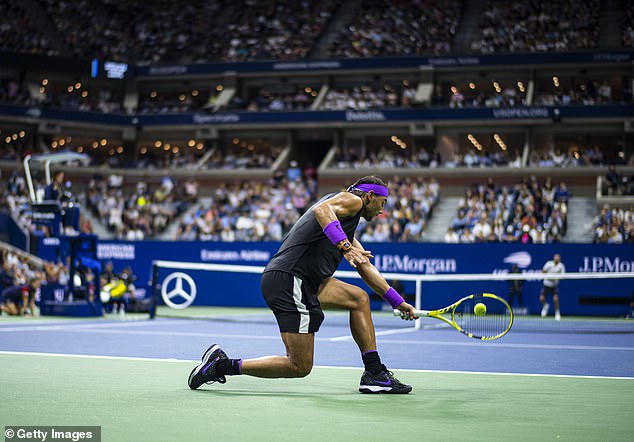