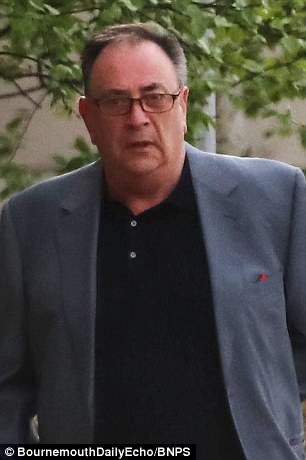 Francis Madden, 61, has been jailed for 40 months for a campaign of fraud that involved ripping off people using dodgy timeshare holidays

A timeshare fraudster who conned people into paying thousands of pounds for holidays in Spain and Portugal they couldn’t book has been jailed for 40 months.

Francis Madden, 61, got his staff to cold-call hundreds of people a day inviting them to a ‘two hour’ presentations for holiday club companies.

Instead his victims endured five hours of hard-sell techniques during which loud music was constantly played.

Some ‘exhausted’ participants were even escorted to cash machines to hand over their money.

Although victims were told they could later cancel their contracts during the cooling off period, when they attempted to do so they were told it was not possible.

A court heard the accommodation offered was ‘virtually worthless’ as those who attempted to book breaks in Spain and Portugal found they were unable to do so or there was limited availability.

Those who attempted to complain found the companies had changed addresses and their calls and emails went unanswered.

Madden, from Bournemouth, Dorset, pleaded guilty to three counts of fraudulent trading between May 2012 and February 2016.

In jailing him at Bournemouth Crown Court a judge branded his conduct ‘reprehensible’.

He also admitted a further charge of breaching a suspended sentence that has been made on him in 2012 at Southampton Crown Court.

On that occasion he admitted eight counts of unfair trading relating to a similar scam on people in the market for timeshares and holiday clubs in the Southampton area.

He gave a four hour presentation to people who were told if they paid up to £2,000, they would get discounts on accommodation, flights and cruises.

Bournemouth Crown Court was told that after that conviction Madden set up a series of businesses, ‘phoenix-like, one after the other’, although his victims had no idea the companies were run by the same man.

Staff working for the Madden, including his co-defendant Claire Garland, were instructed to cold-call 200 people each a day.

Neil Fitzgibbon, representing Garland, said she was ‘gullible’ and a ‘puppet’ to Madden.

Sentencing Madden, Judge Stephen Climie said: ‘His behaviour was commercially inept, and on occasion morally irresponsible, if not reprehensible.

‘He was prepared to put people at risk.’

The judge also sentenced Garland to a 12-month conditional discharge after hearing Madden’s offending has left her mired in debt.