You little weasel! Tiny mammal escapes the clutches of a heron after an extraordinary two-minute struggle that ended when it bit the bird on its beak

In an incredible battle between big and small a tiny weasel defeated a huge heron by twisting out of the bird’s grasp and biting it on its beak.

The small mammal had been hunted by the hungry heron in Peterhead, Aberdeenshire, Scotland, sparking a two-minute scramble between the pair.

The weasel twisted and turned to try escape the bird and was eventually victorious when it bit the heron and was let go. 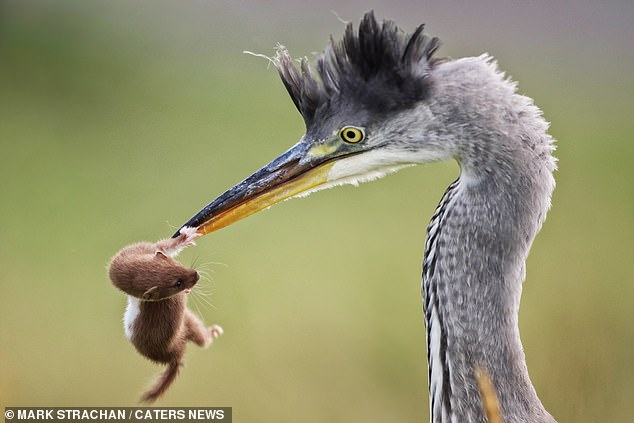 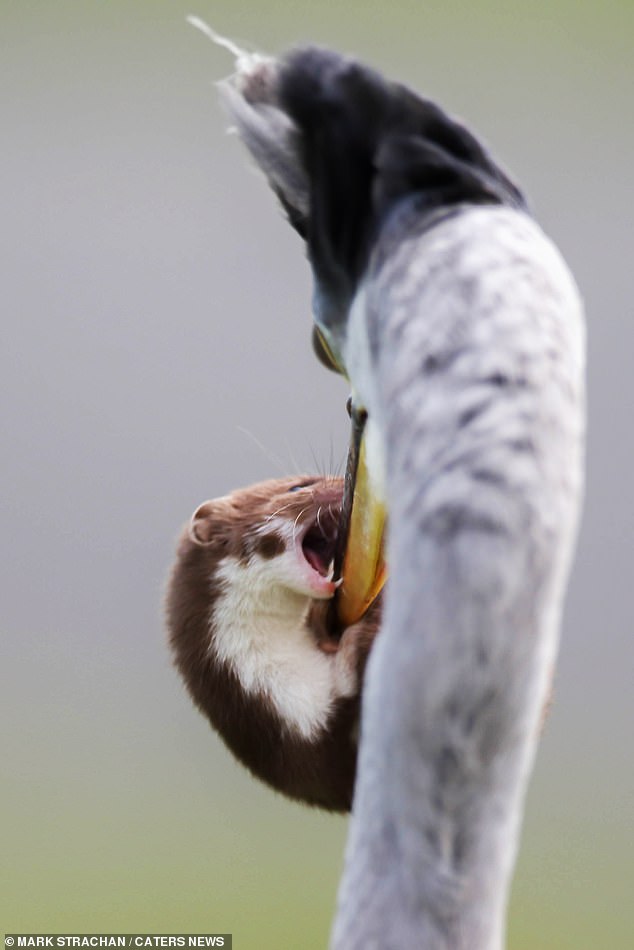 The pictures were captured by Mark Strachan, 51, who was shocked at the fight the little weasel was able to put up.

He said: ‘I had previously been taking pictures of herons catching voles and they made light work of it really, they just kind of stab them with their beak and then eat them alive.

‘This little weasel was a different story though. He wasn’t having any of it.’

Although the gas plant operator was excited to be photographing the epic struggle he was also in ‘quite a flap’ over the mammal’s screams.

‘I don’t know if you’ve ever heard a weasel scream but it was crying and screaming like a baby and the sound was so high-pitched,’ he said.

Mark, who takes wildlife photos in his spare time, told how the weasel contorted into different positions to get free.

‘He wasn’t going to give up without a fight.

‘Finally the weasel bit the heron’s face and I think the heron just thought: “right I have met my match here, let’s forget about it” and the weasel dropped to the ground and ran off.

‘Heron’s aren’t small, this one was around two feet tall and they eat rabbits so I assumed a weasel would be easy for it.

‘When you love nature as much as I do, to witness something like that is pretty spectacular.’