Home » World News » Today, this iconic photo might be considered an assault

If you have been alive and in possession of eyeballs at any point in the past 75 years, chances are you have seen the photograph of George Mendonsa kissing Greta Zimmer Friedman on V-J Day  in 1945. He: a sailor, ecstatic to not have to return to the Pacific. She: a dental assistant, celebrating the war's end on her lunch break in Times Square. The photograph was published in Life magazine and showed Mendonsa bending Friedman backward as her white uniform rode up her legs. 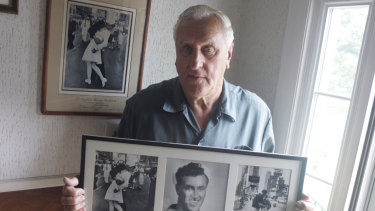 George Mendonsa poses for a photo in 2009 with a copy of the iconic 1945 photo.Credit:AP

Mendonsa died this week, after a long career as a Rhode Island fisherman and a long marriage to his wife, Rita. Within 24 hours of his passing, a statue that recreated his and Friedman's famous kiss was defaced. On Friedman's aluminum leg, in red spray paint, someone had written, #MeToo.

As much as any image, the picture of Mendonsa and Friedman has defined American perceptions of romance. It's Richard Gere nipping at Julia Roberts’s fingers with a jewellery box; it's John Cusack with a boom box, beneath Ione Skye's window in Say Anything. Mendonsa's grip around Friedman's waist is fervent; her body is limp as if overwhelmed by the passion of his embrace. Behold, the superlative ideal of a perfect kiss.

Neither of them were identified until years after the photograph was published – a handful of other men and women had also claimed to be the famous photo subjects – which allowed a daydreaming public to invent a fanciful backstory: Were the couple reunited lovers? Were they star struck strangers drawn together by joyful attraction? 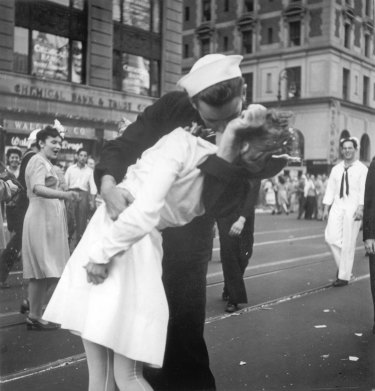 The photo of a sailor and a woman kissing in Times Square to celebrate the end of WWII became an iconic image. Credit:Victor Jorgensen/US Navy

The truth, when it came out, was more pedestrian: Mendonsa, tipsy on a few drinks, had been on a date with his girlfriend at Radio City Music Hall when he heard about the end of the war. They dashed into the street where he saw Friedman, whose uniform reminded him of the nurses he'd served with overseas. Kissing her, he later said, was a spontaneous act of gratitude.

It wasn't my choice to be kissed. The guy just came over and kissed or grabbed.

Friedman, for her part, was caught off guard. "I did not see him approaching, and before I know it I was in this vice grip," Friedman once told an interviewer.

"I felt he was very strong, he was just holding me tight … it wasn't really a romantic event," she told the Library of Congress. "It wasn't my choice to be kissed. The guy just came over and kissed or grabbed."

Maybe it could be wonderful and exciting to be kissed, by surprise, by a stranger, at the end of a long and terrible war. But when you hear Friedman's description of it, the whole thing starts to sound unpleasant. The whole photo starts to look unpleasant, too: the way her head is locked into the crook of his elbow, unable to move or avoid his lips.

A man just died and the thing he was most famous for is a thing that's actually super weird.

It's exhausting, sometimes, to exhume and re-examine old stories and discover they don't look how you wished they would. But such is history, especially romantic history, especially the versions published in magazines or on screen. John Cusack's character? Creepy. Richard Gere's? In Pretty Woman, he's a hero because he … learns to treat a sex worker like an actual human?

In the hours after Mendonsa's death, I watched reactions spread online – many of which amounted to, "Today, this iconic photo might be considered an assault."

I'd like to think of it more as a statement of fact. Today, this iconic photo might be considered an assault. It doesn't mean Mendonsa was a monster. It doesn't mean humans were bad in 1945. It just means that stories don't always behave as we'd like. Our fantasies can be punctured by the reality of other people's feelings.

A kiss based on one person's joy and another person's non-consenting shock isn't really a perfect kiss. And actually, it never was.