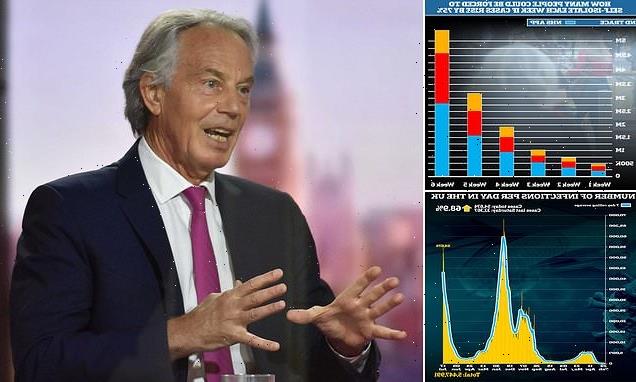 Tony Blair has warned that 10million people will be isolating because of the ‘pingdemic’ by August 16 and the economy will be plunged into chaos.

Yesterday, the number of daily coronavirus cases hit 54,674, with 740 patients admitted to hospital and 41 deaths.

Mr Blair, 68, has an Institute for Global Change that is due to publish a report tomorrow which predicts that the number of people forced to isolate because of the Test and Trace app could reach 10million by August 16.

On that date a ‘test to release’ scheme is expected to come into play which would let people stop self-isolating if they get a negative test result. 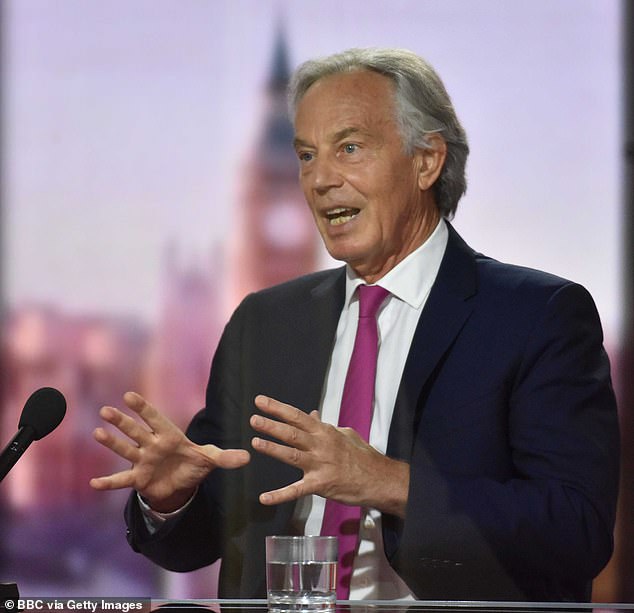 Mr Blair, 68, has an Institute for Global Change that is due to publish a report tomorrow which predicts that the number of people forced to isolate because of the Test and Trace app could reach 10million by August 16

The report, Risks and Restrictions: Striking the Right Balance, will advise that people who have had both vaccines or is under 18 shouldn’t have to self-isolate. And that people who have received one dose should be entitled to a ‘fast release’ if they test negative four days after being pinged.

And he adds that quarantine should be shortened from 10 days to seven even if someone tests positive.

He told The Sunday Times: ‘The starting point for me is that you’ve got to have a consistent risk calculus. There’s no point trying to obliterate risk in one part of the landscape while you’re opening yourself up to substantial risk in another part.’

He added that treating vaccinated and unvaccinated people differently is the only way to achieve a ‘consistent approach to risk’.

Boris Johnson cancelled plans for a Churchillian launch of Freedom Day after No 10 became alarmed by the surge in the number of infections. 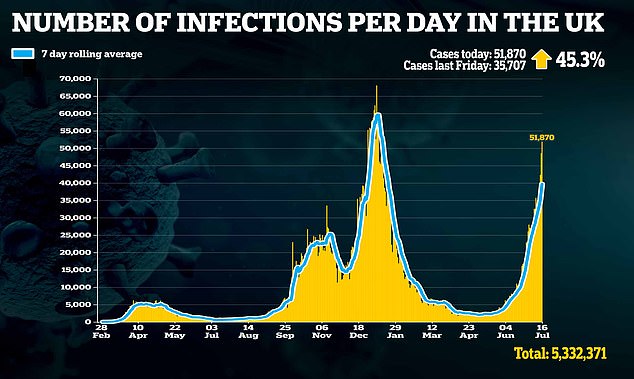 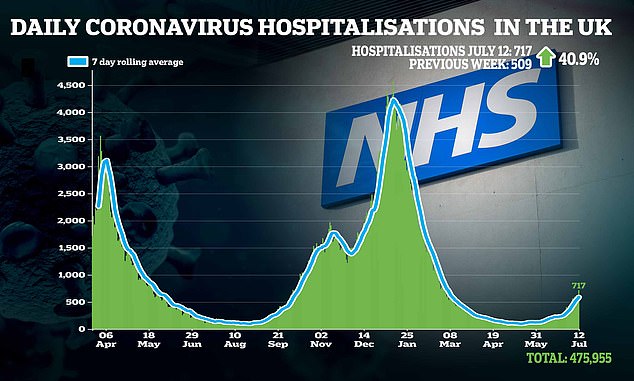 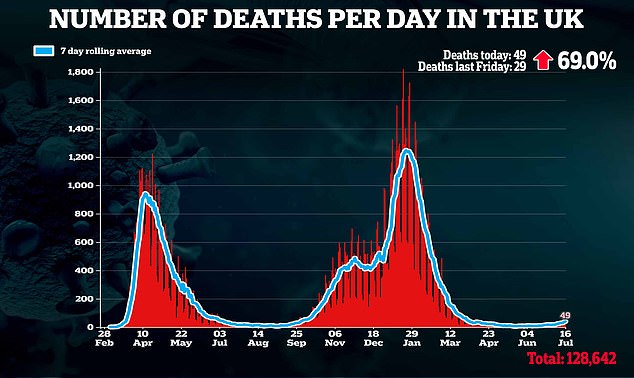 Officials had discussed marking the lifting of Covid restrictions with a rousing speech by the Prime Minister at an historic venue associated with the wartime leader – until scientific advisers took fright at the recent climb in cases.

Mr Johnson has abandoned his previously bullish attitude to tomorrow’s ditching of most restrictions – including social distancing and legal limits on gatherings – and is no longer referring to the moment as ‘irreversible’.

Mr Blair added: ‘Nothing is risk-free apart from permanent lockdown and isolation, which we know we can’t do. The question is to take a sensible view of risk.’

Former Health Secretary Jeremy Hunt yesterday described the situation as ‘very serious’, and raised the prospect of another lockdown this autumn. 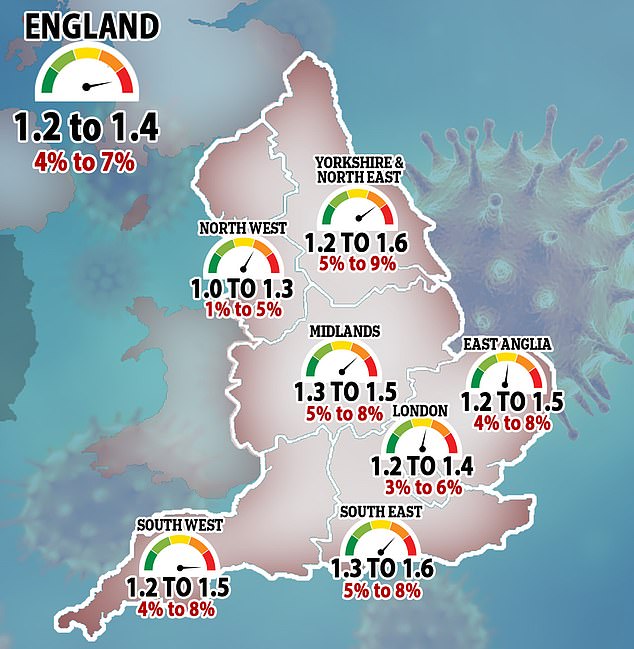 Mr Hunt, who is now chairman of the Commons Health and Social Care Committee, said that if cases were still rising in September, ‘I think we are going to have to reconsider’.

Schools, hospitals, transport services and factories have been decimated by staff shortages caused by the ‘pingdemic’ of notifications on the NHS Covid app.

Hundreds of thousands of people have been told they have been close to someone who has tested positive so must self-isolate, while others have been contacted by Test and Trace call centres.

Unlike most ordinary members of the public, however, many Whitehall officials and Ministers have been able to carry on visiting their offices if they take a daily test. 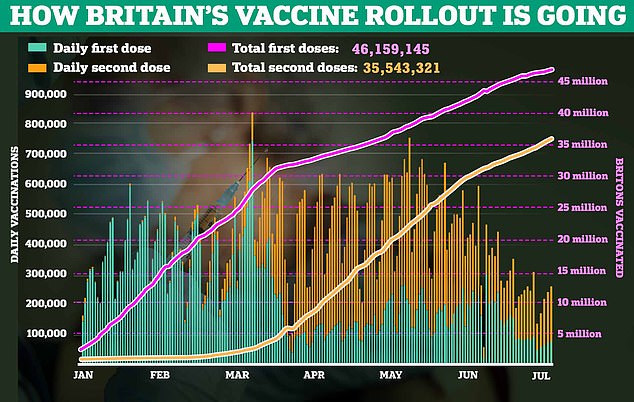 They include Cabinet Office Minister Michael Gove, who was ‘pinged’ in May when he flew out to Porto to watch the Champions League football final but was able to avoid self-isolation by entering a ‘research programme’ called the Daily Contact Testing Study.

Mr Blair thinks that chaos will ensue if the Government doesn’t change its rules for those who have been double-vaccinated.

He believes that children over 12 should be given the Pfizer vaccine and wearing facemasks in indoor setting should still be required by law. 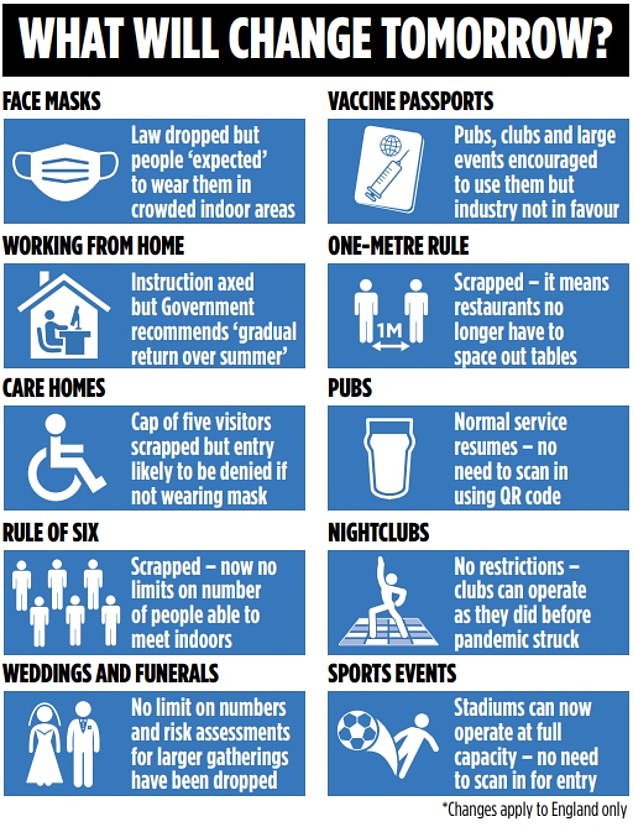 Tomorrow morning, most Covid-19 restrictions are being lifted across England, although governments in Wales, Scotland and Northern Ireland are re-opening at a slower pace

And the former prime minister also thinks that vaccine passports should be introduced to ‘restore confidence in hospitality’.

He added that he believes people who decide not to get the vaccine should be subject to more restrictions than those who have not.

Mr Blair has dedicated his institute’s resources to battling coronavirus for the last year after he decided there was a lack of international leadership.

And he is maddened by the amount of people who are stuck waiting for hospital treatment – which could reach 13million according to Health Secretary Sajid Javid.