Top musical student, 24, accused of raping a fellow undergraduate is cleared by jurors in less than three hours 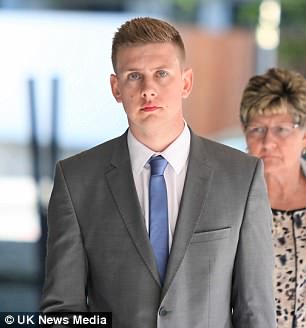 Jurors yesterday took less than three hours to clear a student at a prestigious musical college of raping a fellow undergraduate.

French horn player Adam Jordan, 24, was accused of attacking the woman in his halls of residence at Manchester’s Royal Northern College of Music.

He hugged tearful relatives outside court after being found not guilty by majority verdict.

Mr Jordan did not wish to comment but a family friend said last night: ‘His life’s been on hold.

‘He was able to complete his degree last summer but has been unable to take up an offer to study a Master’s course and has ended up working in a factory.’

During the week-long trial at Manchester Crown Court, jurors were told the complainant and Mr Jordan initially had consensual sex.

But the woman, aged 19 at the time, told police she started screaming when he pinned her down and further sexual activity took place. Mr Jordan later admitted in Facebook messages to the complainant that he had done ‘something beyond terrible’, the court heard.

Mr Jordan, of Atherton, Greater Manchester, insisted their sexual liaison had been consensual.

He said the messages had been an apology for being too ‘rough’ and not a confession of rape.

During the trial, jurors were told of a ‘culture’ of heavy drinking at the college – and a friend of the complainant said the impact of the incident had turned the woman into ‘a 19-year-old alcoholic’.