Scotland’s top civil servant has been urged to launch a probe after a senior Scottish Government official said part of his job was ‘breaking up’ the UK.

In the footage of an internal civil service event, Mr Thomson then describes how fellow officials later find that ‘what I’m actually there to talk about is breaking up the Kingdom’.

A senior Scottish Conservative MSP has called for JP Marks, the Scottish Government’s permanent Secretary, to launch an investigation into the ‘breach of the requirement for civil servants to be politically impartial’.

The video emerged just days after it was revealed the head of the UK civil service is reassessing whether ministers can continue to use Scottish Government staff and resources to promote the case for independence.

It comes in the wake of last week’s Supreme Court ruling that the Scottish Government cannot hold a referendum without UK Government consent because the constitution is reserved to Westminster. 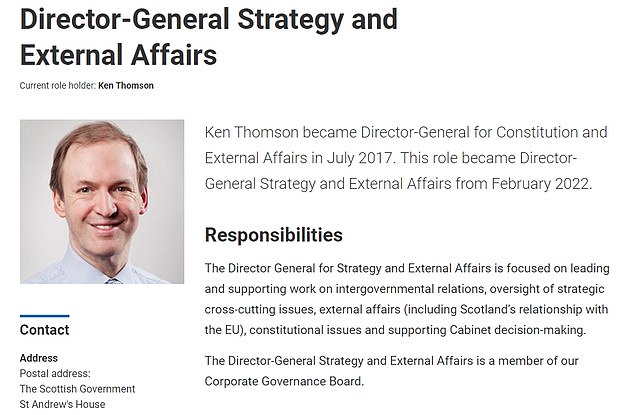 A leaked video shows Ken Thomson, the Scottish Government’s director-general of strategy and external affairs, saying part of his job was ‘breaking up’ the UK 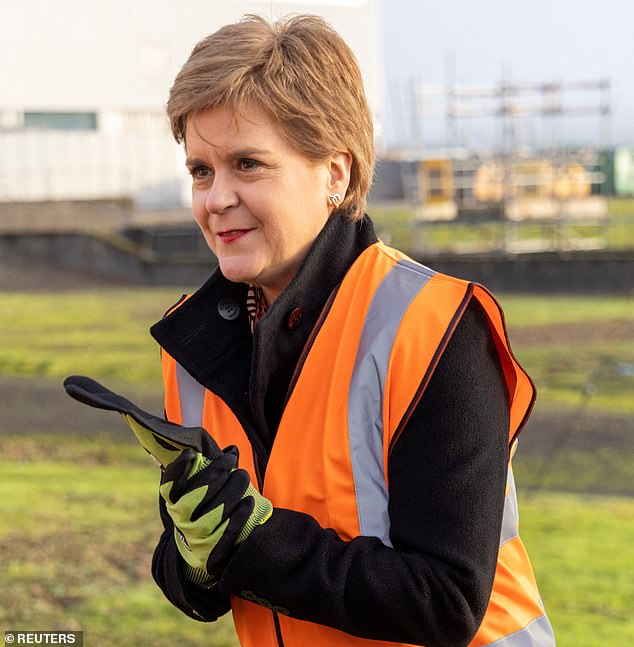 Donald Cameron, constitution spokesman for the Scottish Conservatives, said: ‘This outburst is unacceptable, and I will be writing to the permanent secretary to see if he agrees with me that it represents a breach of the requirement for civil servants to be politically impartial.

‘We all know that the nationalists’ strategy amounts to nothing other than breaking up the UK, but civil servants should not be boasting that it’s their job.

‘Given the court’s ruling, it’s unacceptable for taxpayers’ money and civil servants’ time to be spent like this.

‘When there are serious questions about the SNP persisting with projects that may well be outwith the Scottish Government’s lawful competence, this is another example of their focus being on their own constitutional obsession.

‘It’s the wrong priority at the worst possible time, when Scots want and expect the SNP to focus on pressing issues, such as the cost-of-living crisis and Scotland’s crumbling NHS.

‘The SNP Government should drop their obsession and immediately devote these resources to addressing Scottish households’ real needs.’

The footage, published by the Daily Record newspaper, shows Mr Thomson on stage in front of Scottish Government branding and the logo ‘in the service of Scotland’.

After a member of the audience asked about his responsibility for ‘strategic thinking’, Mr Thomson said: ‘I’ll tell you a secret about why I’ve got strategy in my job description.

‘It’s partly that it’s a word that gets me through some doors in Whitehall, and then they discover that what I’m actually there to talk about is breaking up the Kingdom.’

After members of the audience laughed at the remark, Mr Thomson added: ‘So it’s a shorthand for constitutional change.’

Scottish Labour constitution spokesman Sarah Boyack said: ‘There are serious questions to answer about whether this is an appropriate use of time and energy by the civil service.

‘The SNP’s constitutional obsession might be the only thing that matters to them, but they cannot let it derail the Scottish Government’s work.

‘That means leadership from the top to tackle the cost of living crisis, and supporting and retaining our NHS staff who have kept us going through COVID must be their priority to deliver a fairer, greener Scotland.

‘More than ever we need our two governments to work to deliver for our constituents and businesses who need practical help now.’

At the weekend, figures published by the Scottish Government in response to a Scottish Conservative freedom of information response showed that 24 civil servants are now working on the updated prospectus for independence, with their salaries costing up to £1.5 million a year.

Scottish Liberal Democrat leader Alex Cole-Hamilton said: ‘Mr Thomson should reflect on whether his comments represent the high standards of the civil service and whether it was appropriate to say this in front of more junior staff.’

Meanwhile, Scottish Conservative chief whip Alexander Burnett wrote to Ms Sturgeon to raise concerns that her official spokesman last week broke the code of conduct for special advisers when he launched a strongly-worded attack on opposition parties following the Supreme Court rulers and accused them of a ‘denial of democracy’.

The rules state special advisers ‘must not take public part in political controversies, through any form of statement’, and there is also a requirement to ‘observe discretion and express comment with moderation, avoiding personal attacks’.

‘As outlined during that session, the role of civil servants is to support Ministers in a way consistent with the Civil Service Code, good government, organisational values and the democratic process.’