The Tories have slumped to just 7 per cent on the eve of European elections – as a shock poll shows the Brexit Party surging further ahead.

As Theresa May’s leadership implodes, the Conservatives have dropped another three points over the past week – while Nigel Farage’s new outfit have gone up by two.

The YouGov reseach for the Times also paints a grim picture for Labour, which has slipped into third on just 13 per cent support – well behind the Lib Dems on 19 per cent and only just ahead of the Green on 12 per cent.

The dire figures underline the catastrophe facing Mrs May and the Tories when the results of the elections are declared on Sunday night and Monday morning. 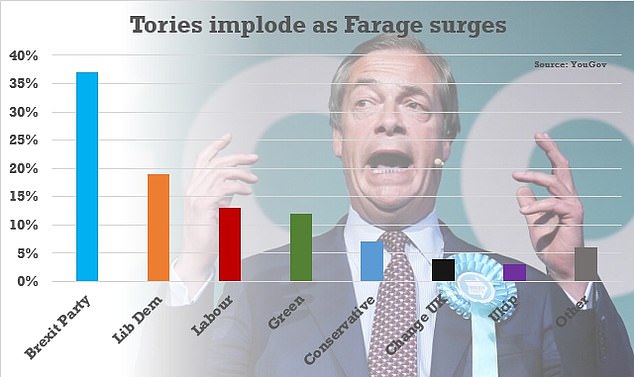 As Theresa May’s leadership implodes, the Conservatives have dropped another three points over the past week – while Nigel Farage’s new outfit have gone up by two

Even loyalist Conservatives are deserting the PM as she comes under pressure to pull the plug on her Brexit deal and resign.

Mrs May faces a three-hour bruising in the Commons later during PMQs and then a debate on her Brexit bill.

Yesterday Mrs May took the gamble of offering MPs a binding vote on a second referendum – if they backed her withdrawal agreement at the fourth attempt.

But her speech was branded a ‘f***ing disaster’ by one minister with 65 Tory MPs set to vote against her deal next month – including u-turns from more than 30 who had voted for it last time – and Labour rebels also refusing to bail her out.

Today Environment Secretary Michael Gove avoided saying if the PM would be in post after next week and said the cabinet will ‘reflect over next few days’ on whether the Brexit bill will definitely be voted on in the first week of June. 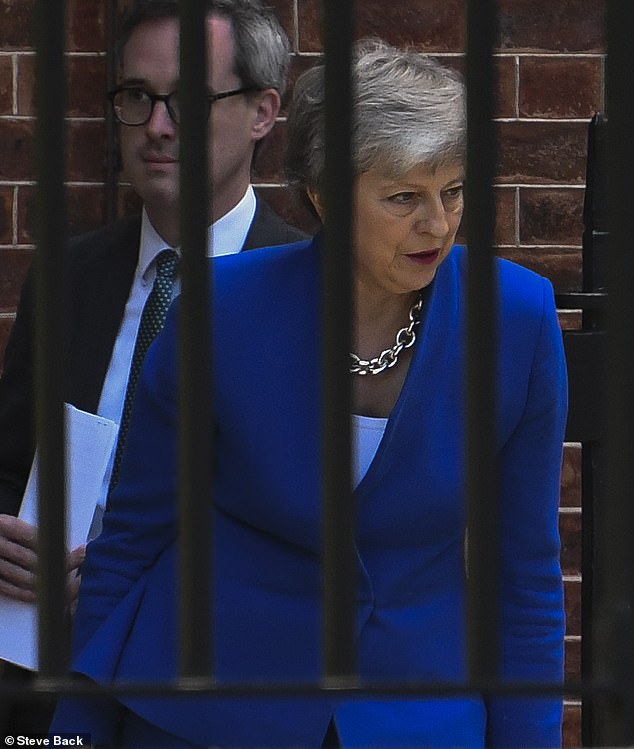 How do the European elections being held on May 23 work?

European elections are taking place on May 23 across the UK.

Voters will elect 73 MEPs to represent them in the European Parliament for a five-year term – although their roles will cease to exist if the country leaves the EU before then.

The UK is split into 12 regions for the ballot, returning different numbers of politicians depending on their population size.

Each MEP represents all the people in their region.

Unlike Westminster elections, a form of proportional representation is used, with seats allocated to parties depending on their share of the vote.

Results will not start being announced until late Sunday night, after polls have closed across the EU.

Donald Trump says 'I am your law and order president'