Michael Gove has called on Eurosceptics to get behind Theresa May’s Chequers plan by arguing it can always be adapted after Brexit.

The Environment Secretary said that while the blueprint was ‘the right one for now’, a future prime minister would have the power to ‘alter the relationship’.

Mr Gove’s call came as Boris Johnson said: ‘We are heading full throttle for the ditch with a total write-off of Brexit.’

In his Daily Telegraph column today, the former Foreign Secretary accuses the European Union of launching an ‘attempt to annex Northern Ireland’. 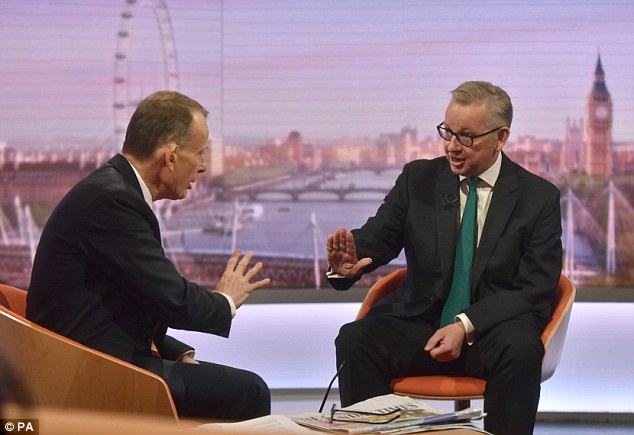 But last night it was reported that Brussels was preparing to accept a frictionless Irish border using new technology to minimise checks.

Diplomatic notes seen by The Times show the EU is moving towards the idea of goods being tracked using barcodes on shipping containers, to remove the need for physical border infrastructure.

The EU has previously claimed the only feasible option to avoid the return of border controls would be customs checks on goods before they left mainland Britain.

Mrs May has faced resistance from some Brexiteers over the Chequers proposal, which caused the Cabinet resignations of Mr Johnson and David Davis. But Mr Gove, one of the leaders of the Leave campaign, urged fellow Tories to support the plan in order to secure Brexit, rather than risk an impasse in Parliament or a general election.

He admitted that the Chequers proposals forced him to compromise on some of his beliefs, but insisted the most important issue now was ensuring Britain left the EU in ‘good order’.

Asked if the plan would be permanent, Mr Gove told BBC One’s The Andrew Marr Show: ‘Yes, but there’s one critical thing – a future prime minister could always choose to alter the relationship between Britain and the European Union. 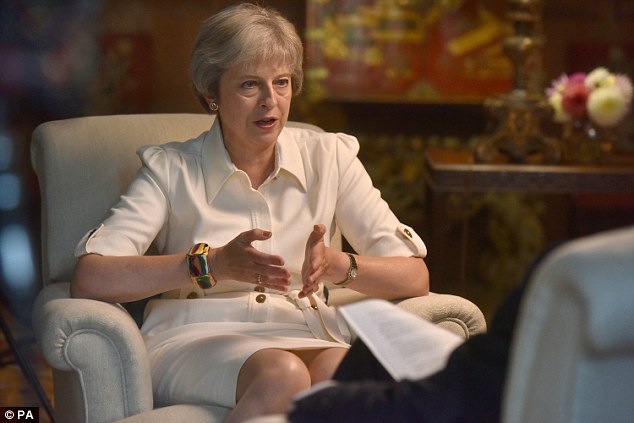 Theresa May (on BBC Panorama) has faced resistance from some Brexiteers over the Chequers proposal, which caused the Cabinet resignations of Boris Johnson and David Davis

‘But the Chequers approach is the right one for now because we have got to make sure that we respect that vote and take advantage of the opportunities of being outside the European Union.’

He said it will be up to the House of Commons in the future to ‘chart this nation’s destiny’ and decide what to do if Brussels law changes.

As EU leaders prepare to meet to discuss Brexit in Salzburg this week, Mr Gove said the onus was on Brussels to compromise.

He added: ‘I’ve compromised. I’ve been quite clear that some of the things I argued for in the referendum passionately… as a result of Chequers, I have to qualify one or two of my views. I believe the critical thing is making sure we leave in good order with a deal which safeguards the referendum mandate.’

Mr Gove’s remarks come as Tory MPs opposed to the Chequers deal plan to ramp up public opposition with a series of rallies across the country.

One event, organised by pro-Brexit group Leave Means Leave, will take place in Birmingham later this month while the Conservative Party conference is being held in the city.

International Trade Secretary Liam Fox, who has previously put the chances of Britain leaving the EU without a deal at 60-40, said yesterday: ‘I do detect that there is a movement from the European Union towards getting a deal.’

Khan’s U-turn as he backs second vote on Brexit

Sadiq Khan faced a backlash last night after he demanded Brexit be postponed to allow time for another EU referendum.

The Labour Mayor of London joined calls for a fresh poll despite warning such a move would lead to ‘even more cynicism’ among voters in the weeks after the 2016 vote to leave the EU.

But yesterday he said ministers could ‘easily’ ask Brussels to ‘suspend’ the UK’s exit next March and hold a referendum with the various choices of accepting the Brexit deal or remaining part of the bloc.

Environment Secretary Michael Gove said it was ‘troubling’ that Mr Khan was attempting ‘to frustrate the vote that we had two-and-a-half years ago’.

He told the Andrew Marr Show: ‘People voted clearly, 17.4million people voted to leave the European Union and Sadiq is essentially saying, ‘stop, let’s delay that whole process, let’s throw it into chaos’. And I think that would be a profound mistake.’ 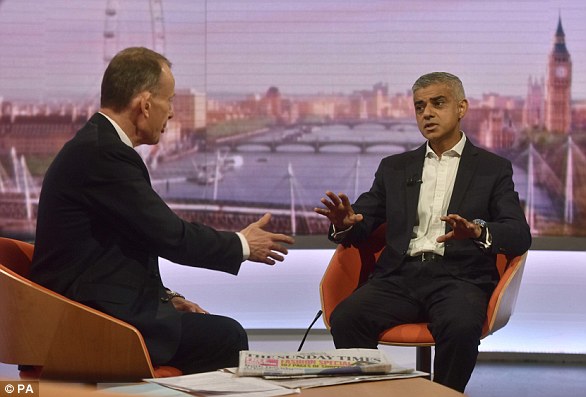 Also appearing on Marr, Mr Khan was shown footage of his comments rejecting a second poll in July 2016 because the British people had ‘had a say’.

But he insisted his U-turn was not backing a re-run but giving the public ‘a say for the first time on the outcome’.

He dismissed suggestions he was trying to distract from his track record as mayor. Mr Khan is the most senior Labour figure so far to publicly call for a second referendum. Anti-Brexit campaigners are hoping to use the party’s conference next week to change its official policy in favour of another vote.

But Labour frontbencher Barry Gardiner yesterday told Sky’s Sophy Ridge a fresh referendum would give Theresa May a ‘lifeline’.

The party’s international trade spokesman said the 2016 campaign had caused ‘real divisions’, adding: ‘I think the challenge now is to try to heal society.’ But Labour has not taken the option of another vote off the table.

Tories last night lined up to criticise Mr Khan. Former Cabinet minister Theresa Villiers said: ‘It is so undemocratic to ask people to vote again just because there is an elite establishment that does not like the answer they were given the first time.’