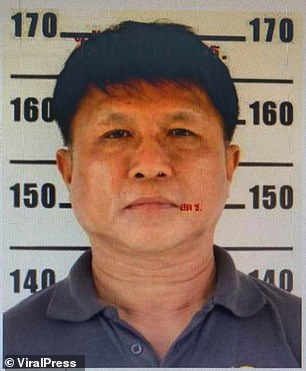 Sanchai Phaoarun, 58, was taking a French couple sightseeing in Thailand when he was attacked by a swarm of hornets

Horrified tourists in Thailand watched on as their guide was stung to death by a swarm of hornets that continued to attack his body for four days.

Sanchai Phaoarun, 58, was taking a French couple sightseeing in Chiang Mai, northern Thailand, last Saturday afternoon when he was set upon by the angry insects.

Mid-way through the mountain trek the tour group was suddenly surrounded by thousands of the giant wasps after the hive was disturbed.

They dive-bombed Phaoarun and repeatedly stung him across his body.

The guide collapsed on the ground in agony while the terrified French couple fled in panic.

Locals from the nearest village heard cries for help from the two tourists, Jean Louis L’amour and Anne Mapile, who had also been stung. The pair were taken to hospital.

Rescue workers found Sanchai’s dead body later that day but they were unable to retrieve it because the corpse was still covered in killer Asian hornets, known as vespa velutina. 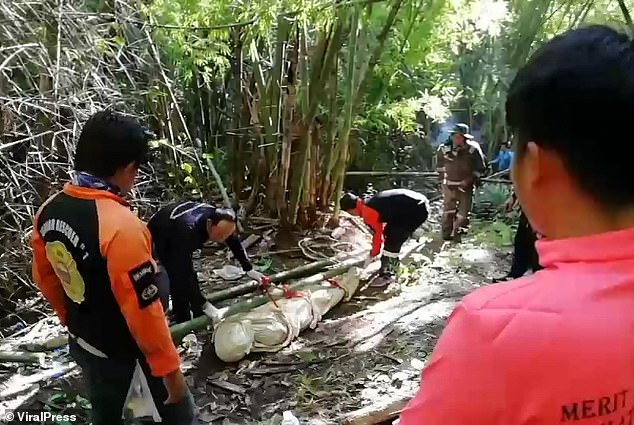 Horrified tourists saw their tour guide stung to death by a swarm of angry giant wasps. His body was taken from the forest near Chiang Mai by rescuers four days later

After four days left in the deep forest, the sting-riddled body was finally retrieved yesterday afternoon.

It is thought Phaoarun may have tripped and fallen as he tried to flee the swarm’s attack, according to local media.

Police Liutenant Colonel Sampan Yotin blamed the nightmare-like death on the wasps and said it was not being treated as suspicious.

He said: ‘The station received a report about the death of the tour guide last week but the team were unable to collect the body.

‘The French tourists were also injured. They have provided testimony about what happened and there are no suspicious circumstances.’

One of the rescuer volunteers involved with retrieving the body said it was difficult because the hornets were still swarming around the corpse.

They added: ‘We went into the wood on Monday to help the tour guide but the mission had to be abandoned after three of our team were stung by the hornets that were swarming around body.

‘We planned for a safer method of covering our bodies using firefighter suits and went in again today and finally we were able carry the body out.’

The local guide’s body was handed over to the family who will hold a Buddhist funeral following a autopsy.