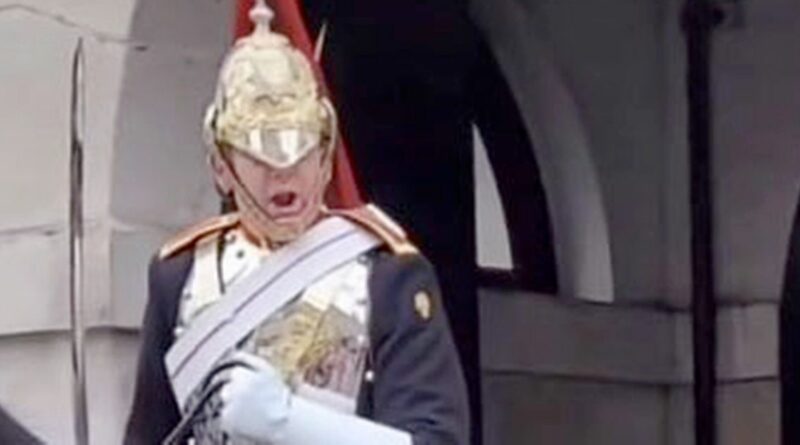 A shocked tourist has vowed never to return to London after seeing a woman be screamed at by a member of the Queen's guard, but British TikTok users agreed that she was in the wrong.

The video, which was shared by Ethan (@_phigs), shows his blonde step-mum moving to stand next to the soldier who was mounted on top of a tall black horse outside of Buckingham Palace after waiting in line to pose for a photo.

But while she was posing for a picture, she reached over to grab the horse's reins, making the animal visibly nervous.

Then, the soldier yelled: "Stand back from the Queen's lifeguard, don't touch the reins!"

The tourist jumped and quickly moved away after being shocked by the incident which has sparked Ethan's vow to never return to London as a result.

The caption said: "We Will Never Return To London After This Incident."

However, British TikTok users didn't feel sympathy for the woman in the clip, which has gained more than 167,000 likes, as they believe she was the one in the wrong and reminded people that the Queen's guard is the military – not Disneyland.

One user said: "It’s not Disney they are working horses and serving army."

A second wrote: "They really don’t care if you’re going back I promise you", while a third added: "Serves her right you aren’t allowed to touch the guard."

One user took to the comments to say that they were able to hold the reins for a photo after asking the soldier first, but people quickly responded saying that asking was different.

The British Army has been contacted for a comment regarding the video.

The news comes after a member of the Queen's Guard has been filmed knocking over a young boy in front of a horrified crowd during a patrol march at the Tower of London.

The soldier, a Coldstream Guard – a division with a ceremonial role of providing protection for royal palaces – is filmed marching before a child appears to step out in front of him.

The guard can be heard shouting to warn him to get out of the way but the child is looking in the opposite direction and appears to be knocked to the ground.

As the soldier stumbles to try to miss the boy, he appears to tread on his foot before continuing to march with a fellow soldier.