Touts are cashing in on England’s vital match against Colombia tomorrow night by selling tickets for many more times their face value.

Fans following the Three Lions face a huge hike as they scramble for tickets for the last 16 game in Moscow.

Relatively few England supporters have made the journey out to Russia so far, but hundreds more appear to have made last-minute plans in the past few days after the team’s encouraging start to the tournament.

Fifa is threatening legal action against ticket reselling site Viagogo, where prime tickets are going for £513 when they are officially listed as £177. 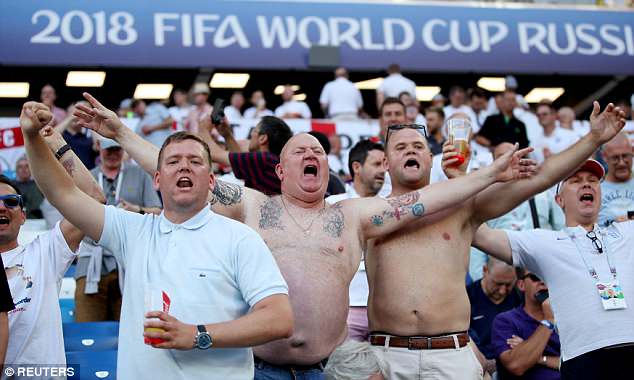 Fans following the Three Lions face a huge hike as they scramble for tickets for the last 16 game in Moscow. Pictured, fans at England’s game against Belgium in Kaliningrad, Russia

Category three tickets – the cheapest type of ticket available to non-Russians – were going for nearly £360 when they are supposed to be sold for £83. This is more than four times their face value.

Other reselling sites, including ticketbazaar.co.uk, were offering tickets for the game for up to £870 for prime category one seats and £487 for category three.

Football’s world governing body has warned it will cancel any tickets that are found to have been bought through unauthorised sellers.

Some 3,000 England supporters are expected to be in the Spartak stadium for the crunch last-16 knockout clash.

Around 2,000 fans are believed to have bought tickets for the game through the FA, with the rest understood to have purchased seats through Fifa and the black market. 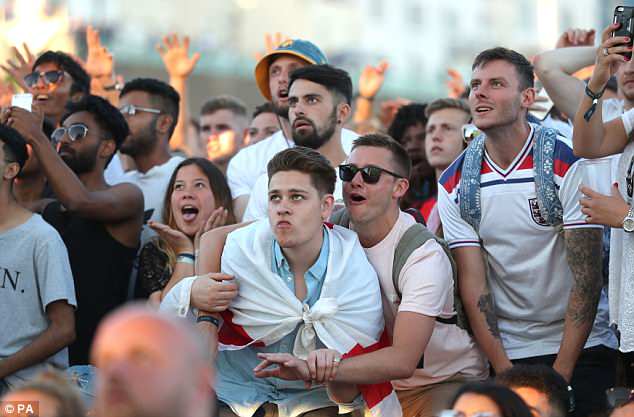 Relatively few England supporters have made the journey out to Russia so far. Pictured, fans cheering on the Three Lions in Brighton

UK police have warned England supporters thinking of travelling to Russia to plan ahead by sorting their ticket and accommodation before they arrive.

Fifa said ticket offers had been removed from websites, but declined to say how many tickets had been cancelled after they learned they had been touted.

A spokesman said: ‘Fifa regards the illicit sale and distribution of tickets as a serious issue and in co-operation with local authorities, including consumer protection agencies in numerous countries, strives to identify and curb unauthorised ticket sales.

‘As a result, a number of unauthorised online ticket sale offers via websites and on social media in various countries have been removed in recent months.

‘Since in the end ticket touting represents a criminal offence, we rely on the support of the respective authorities to tackle this issue within the scope of the applicable legislation.’ Viagogo did not respond to a request for comment last night.

The Cast of ‘Every Witch Way’ Have Virtual Reunion, Look Back On Nickelodeon Show