Drivers have been warned they face traffic chaos over the Bank Holiday weekend with 18million cars taking to the roads for families’ last chance to enjoy a staycation.

The RAC is predicting ‘bumper-to-bumper’ traffic in some areas as Brits head on day trips and last-gasp holidays before many return to the office next week.

After six months of lockdown and social distancing, this year’s Bank Holiday weekend is expected to see a slight increase in the number of people taking trips – with 1.8million more journeys predicted compared to last year.

Friday is expected to see the largest volume of cars on the road with an estimated 5.6m separate trips planned, followed by Saturday with 4.7m and then Bank Holiday Monday itself with 4.4m. 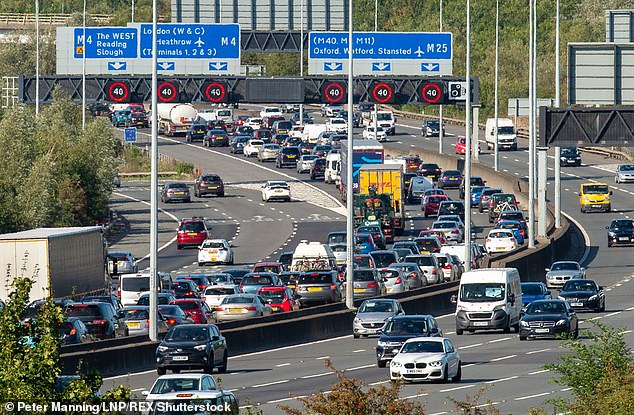 Around 1.8million more cars are expected to be on Britain’s roads this weekend, the August Bank Holiday weekend usually brings delays on motorways, including on the M25 last year

RAC Breakdown spokesperson Rod Dennis said: ‘It’s been anything but a normal summer for so many reasons, but our research indicates that millions of us are still desperate to eke out the last of the summer and enjoy time away, whether that’s a day trip to see friends or family or a long weekend in a caravan or camping.

‘In fact, it may even turn out to be busier on the roads than last year with many more people returning home this weekend after a staycation.

‘Both official Government statistics and our own data from insurance customers show that weekend traffic is now back to pre-lockdown levels.

‘The numbers of people breaking down are also around where we would expect them to be for late August.

‘It’s clear therefore that despite the pandemic, the car has been a vital part of making sure many people have been able to enjoy the summer safely.

‘Key to getting as much out of the bank holiday weekend as possible will be drivers arriving at their destinations when they plan to.

‘While some queues on popular stretches of road, especially to tourist hotspots, will likely lead to some delays a breakdown has the potential to cause far more problems for people’ 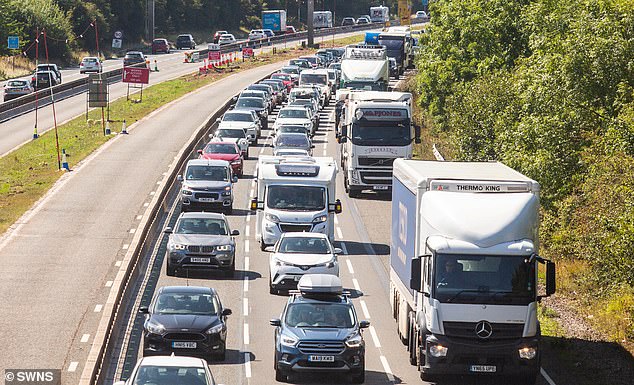 Traffic built on the M5 outside Taunton, Somerset for holidaying Brits at the end of August last year

Motorists have been advised to check their cars before they travel this weekend, including vital areas such as tyre pressure and tread, as well as oil and coolant levels.

Research suggests around 45million daytrips have taken place during August.

There is also advice for people towing caravans.

Ian Hewlett, technical manager at The Camping and Caravanning Club, said: ‘When towing remember not to exceed the maximum speed limit on motorways of 60mph, or slower on other road types.

‘Travelling a little slower can save you fuel, while taking regular breaks helps to keep you fresh and focussed as well as making the journey more pleasant for everyone.’