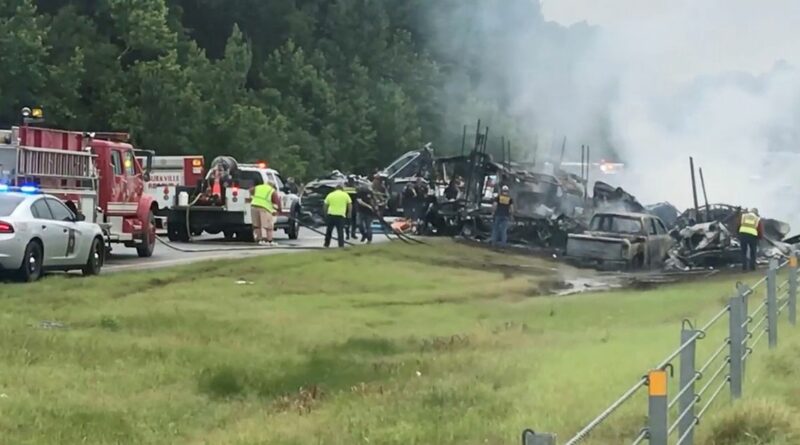 A horrific pile-up during the tropical storm Claudette in Alabama has killed 10 people, including a dad and his baby daughter.

The tragic incident took place over the weekend in the Butler County of the state.

The 18-car crash occurred on Saturday, as the storm raged in the state on Interstate 65, around 35 miles south of Montgomery.

One of the two cars in the accident was a Tallapoosa County Girls Ranch vehicle, from a home for abused, neglected, and abandoned girls, which had eight victims inside, aged between four and 17, AL.com writes.

The van caught fire after the wreck, with the director of the Tallapoosa County ranch, Candice Gulley, being pulled from the blaze and hospitalised.

According to reports, two of the victims in the van were Candice Gulley's children, aged just 4 and 16, and four others were residents and two were guests.

Candice Gulley remains in hospital in a serious but stable condition.

Gulley was reportedly rescued by a bystander who got out of his car and pulled the driver to safety.

The bystander attempted to help the kids inside but the bus was engulfed in smoke and flames and couldn't get to them, officials have said.

Also in the horror crash was a dad and his nine-month-old girl, who were killed in another vehicle when it overturned.

They were later identified as Cody Fox, 29, who died at the scene, and Ariana Fox who sadly died later at hospital.

It's reported that 18 vehicles could have been involved, writes ABC news, including two tractor-trailer rigs.

The pile-up was described as having a "domino effect" after the two 18-wheelers crashed and sandwiched the Tallapoosa Ranch bus between them.

Michael Smith said: "Our hearts are so heavy today. Our Ranch family has suffered a great loss.

"As many of you may have heard, one of our Ranch vehicles was involved in a multiple car accident yesterday afternoon. It is such a horrible tragedy and loss."

"My heart goes out to the loved ones of all who perished during the storm in Butler & Tuscaloosa counties," Ivey wrote on Twitter.

The National Transportation Safety Board is sending 10 investigators to conduct a safety investigation of the crash in coordination with the Alabama Highway Patrol.