The pro-democracy protestors have barricaded the departure hall at Terminal 1 and the entire Terminal 2. Hong Kong airlines has announced flights to all destinations are affected due to “airport restriction”. The Airport Authority (AA) said: “Terminal operations at Hong Kong International Airport have been seriously disrupted as a result of the public assembly at the airport today.”

It added the check-in service for departing flights has been suspended since 4:30 pm local time.

Anti-government protests gathered at the airport for a firth day after they forced the shutdown of the main terminal on Monday, leading to the cancellation of more than 200 flights.

After filling up the arrivals hall, demonstrators began moving to the departures area, despite increased security measures designed to keep them out.

The black-clad protesters held up signs to appeal to travellers from mainland China and other parts of the world reading: “Democracy is a good thing”. 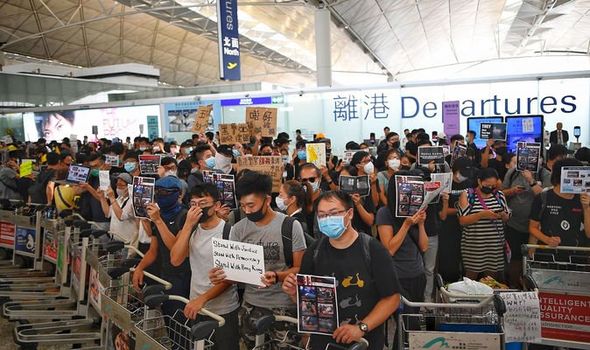 Hong Kong leader Carrie Lam said the ongoing instability, chaos and violence from pro-democracy protests have placed the city on a “path of no return.”

Protests in Hong Kong began in June in retaliation to a bill which would allow extradition of its citizens to China.

The central government in Beijing characterised the protest movement posed an “existential threat” to local citizens.

The demonstrators have shown no sign of letting up on their campaign to force Ms Lam’s administration to respond to their demands.

Such demands include that she step down and entirely scrap legislation that could have seen criminal suspects sent to mainland China to face torture and unfair or politically charged trials.

Ms Lam has since refused and said dialogue would only begin when the violence stopped.

She reiterated her support for the police and said they have had to make on-the-spot decisions under difficult circumstances, using “the lowest level of force”.

Ms Lam added: “After the violence has been stopped, and the chaotic situation that we are seeing could subside.

“I as the chief executive will be responsible to rebuild Hong Kong’s economy to help Hong Kong to move on.”