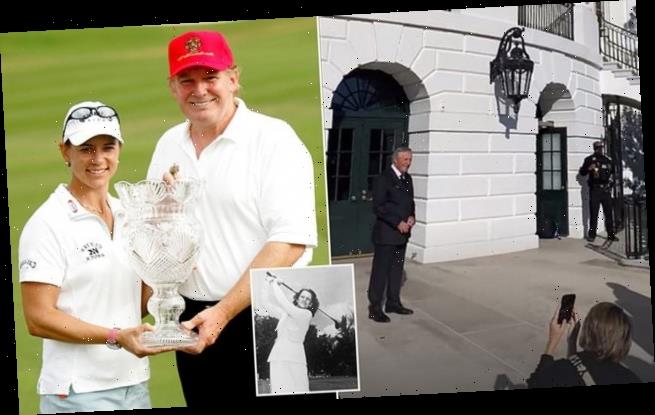 Trump awards Presidential Medal of Freedom to three golfers in a closed-to-the-public ceremony less than 24 hours after his supporters stormed the U.S. Capitol

Two of the recipients, Annika Sorenstam and Gary Player, are retired, while the third, Babe Didrikson Zaharias, died in 1956, and was awarded the medal posthumously.

The ceremony took place behind closed doors and the president did not have any events listed on his schedule, following the riot at the Capitol that led to five deaths.

SCROLL DOWN FOR VIDEO 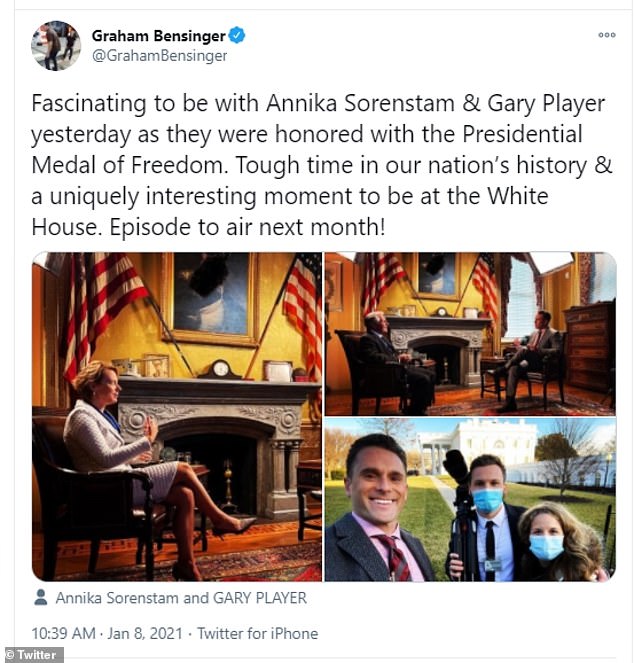 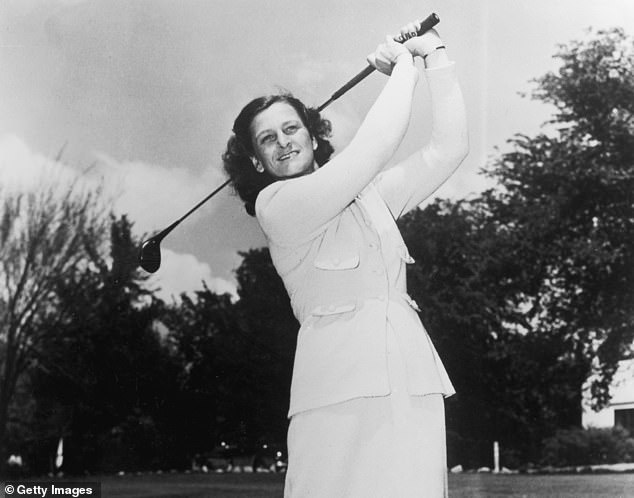 Sorenstam and Player, two of the most decorated golfers in history, are retired while Zaharias (pictured), who died in 1956, was awarded the medal posthumously 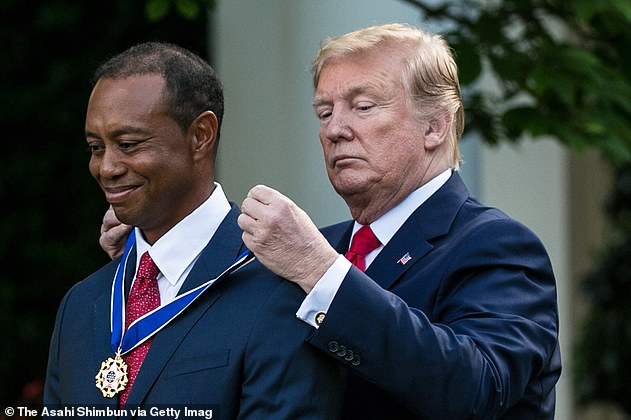 Only four other golfers have ever received the nation’s highest civilian honor, including Tiger Woods, Arnold Palmer, Jack Nicklaus and Charlie Sifford. Pictured:  Trump gives Woods the Medal of Freedom during a ceremony in the Rose Garden at the White House, May 2019

The Presidential Medal of Freedom is only awarded an average of 11 times per year.

It recognizes those who have made ‘an especially meritorious contribution to the security or national interests of the United States, world peace, cultural or other significant public or private endeavors.’

In 2019, Trump awarded the medal to Tiger Woods, who holds numerous golf records and is tied for first for most PGA Tour wins of all time,

The only other golfers to have received the award are Arnold Palmer in 2004, Jack Nicklaus in 2005 and Charlie Sifford in 2014.

Player, who hails from South Africa, has won 24 PGA Tour events and 118 international tournaments, according to ESPN.

Sorenstan, who is Swedish, has won 72 LPGA Tours, making her the winningest female golfer, and she has earned the The Associated Press Female Athlete of the Year award three times.

Meanwhile, Zaharias – founder of the LPGA – was also an Olympic track and field champion and was a top-ranked golfer upon her death from colon cancer.

While all three have had exceptional careers, many felt that the timing of the awards was poor due to its proximity to the events that took place at the Capitol.

Hundreds – incited by Trump himself – invaded the chambers and office of Senate and House.

The riot led to one woman being fatally shot, three dying from medical emergencies and a Capitol Police officer succumbing to injuries from a rioter.

Some have called for the 25th Amendment to be invoked so Trump can be removed from office while Speaker of the House Nancy Pelosi says she plans to impeach Trump a second time.

No photos from the ceremony have been distributed, but pictures have captured both Player and Sorenstan at the White House on Thursday.

Additionally, video of the reception shows a pianist playing music for guests, many of whom are wearing masks incorrectly or not at all.

Player’s son and daughter-in-law, Marc and Claudia, tweeted that they were ‘ashamed’ and said they wished Player would decline the award 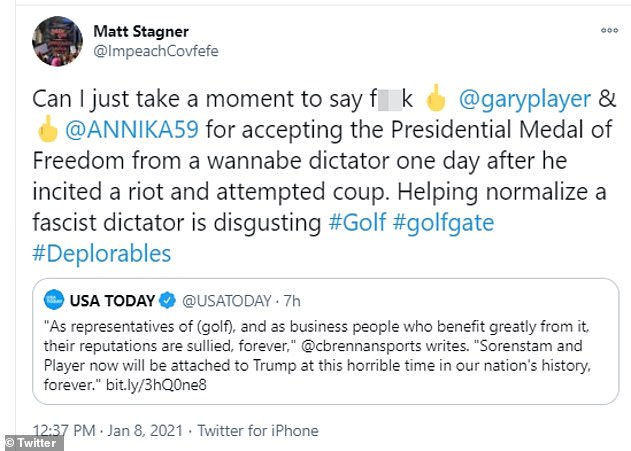 Player’s son Marc tweeted that he wanted his father to reject the medal.

‘I wish my father would simply & politely decline this ‘award’ at this time. Tone deaf. In denial. Wrong!!’ he wrote.

Marc’s wife, Claudia, added that accepting the award was a ‘mistake’ and added: ‘I am ashamed.’

‘I have to say I’ve been saddened, heartbroken, confused and occasionally angered at the normalization of this President by so many,’ he said, according to Golf Monthly.

‘And today’s medal ceremony on the day after inciting of a mob by said President, it’s just one more reminder of the tone deafness, the convenient comfortable ignorance of many in our game.’