The White House has backed off a tweet from President Donald Trump indicating he had convinced the king of Saudi Arabia to produce an extra two million barrels of oil per day.

On Saturday, Trump implied that he and King Salman bin Abdulaziz Al Saud agreed that the increased production would brings costs down in the US, which have risen since America stopped importing Iranian oil.

‘Just spoke to King Salman of Saudi Arabia and explained to him that, because of the turmoil & disfunction [sic] in Iran and Venezuela, I am asking that Saudi Arabia increase oil production, maybe up to 2,000,000 barrels, to make up the difference…’ he wrote.

However, in a statement, the White House said the king had agreed to increase production if needed and said no specific amount was pledged. 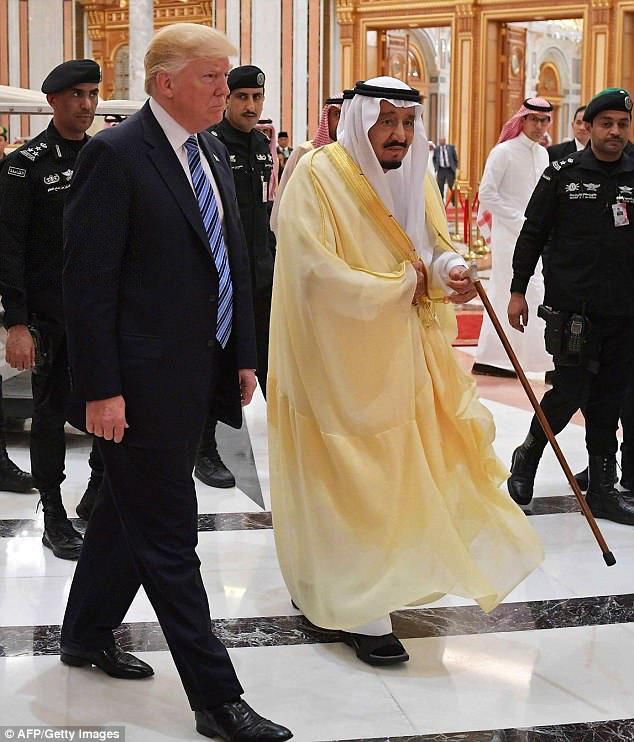 The White House has backed off a tweet from President Donald Trump indicating he had convinced the king of Saudi Arabia to produce an extra two million barrels of oil  per day. Pictured: Trump and King Salman bin Abdulaziz al-Saud arrive for the Arab Islamic American Summit, May 2017 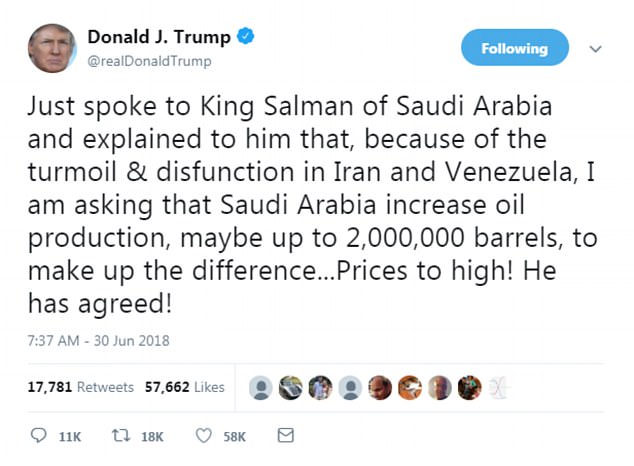 Trump implied on Twitter that he had asked the king in a phone call to increase oil production in hopes of greater supply bringing costs down in the US, writing ‘Prices [are too] high!’

‘King Salman affirmed that the Kingdom maintains a two million barrel per day spare capacity, which it will prudently use if and when necessary to ensure market balance,’ read the statement.

A little more than an hour after Trump’s tweet, the state-run Saudi Press Agency reported on the call, but offered few details.

The deal would also violate an agreement with the Organization of the Petroleum Exporting Countries (OPEC).

Last week, Saudi Arabia was one of several countries that agreed to boost production by a combined 700,000 to one million barrels per day.

A two million barrels per day increase would be at least double market expectations.

Iran’s OPEC governor Hossein Kazempour Ardebili told Bloomberg that such an agreement would mean Trump was calling on the Saudis to ignore their commitment to OPEC.

‘There is no way one country could go 2 million barrels a day above their production allocation unless they are walking out of OPEC,’ he said. 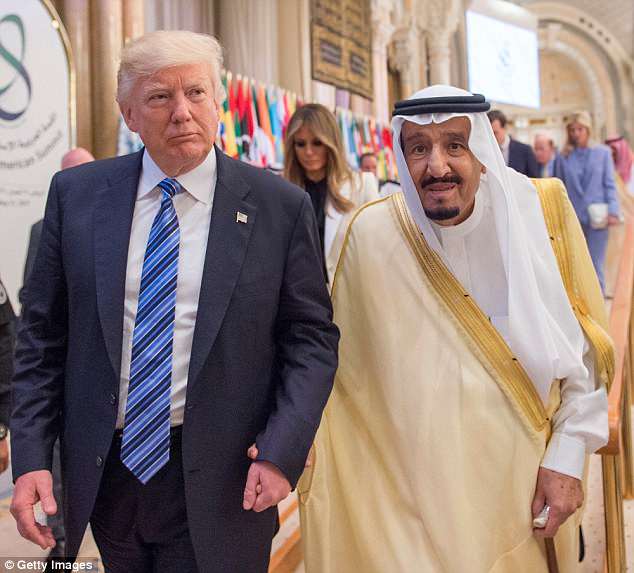 However, in a statement, the White House said the king had agreed to increase production if needed and said no specific amount was pledged. Pictured: Trump and King Salman arrive for the summit, May 2017

Oil prices have edged higher in recent months, as the Trump administration has pushed allies to end all purchases of oil from Iran following the US pulling out of the nuclear deal between Tehran and world powers, with ongoing unrest in Venezuela, as well as with fighting in Libya over control of that country’s oil infrastructure.

Average prices in the US for unleaded gas, including taxes, averaged $2.83 per gallon for the week ending on June 25.

That’s an increase of about 55 cents from the same period last year, according to AAA.

The statement from Saudi Arabia added that there also was an understanding that oil-producing countries would need ‘to compensate for any potential shortage of supplies.’ It did not elaborate.

The Trump administration has been counting on Saudi Arabia and other OPEC members to supply enough oil to offset the lost Iranian exports and prevent oil prices from rising sharply.

Last week, members of the OPEC cartel led by Saudi Arabia, and non-cartel members, agreed to pump one million barrels more crude oil per day, a move that should help contain the recent rise in global energy prices.

Trump’s tweet offered no context for the supposedly promised additional 2 million barrels of crude oil to be produced by Saudi Arabia, so it’s not clear whether that was intended to mean per day, or something else. 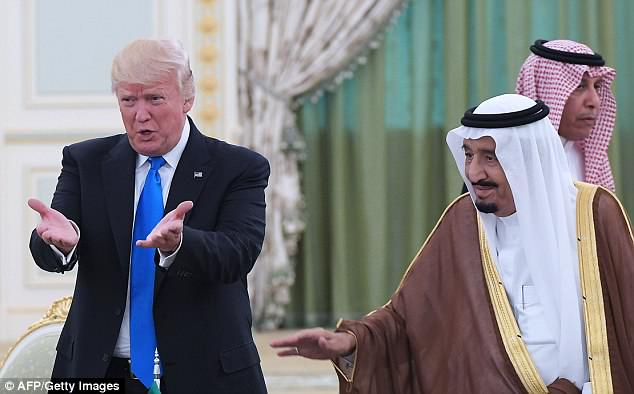 Last week, Saudi Arabia was one of several countries that agreed to boost production by a combined 700,000 to one million barrels per day. Pictured: Trump and King Salman attend a signing ceremony at the Saudi Royal Court in Riyadh, May 2017

However, Saudi Aramco CEO Amin Nasser told journalists in India on Monday that the state oil company has spare capacity of two million barrels of oil per day. That was after Saudi Energy Minister Khalid al-Falih said the kingdom would honor the OPEC decision to stick to a 1-million-barrel increase.

‘Saudi Arabia obviously can deliver as much as the market would need, but we’re going to be respectful of the 1-million-barrel cap – and at the same time be respectful of allocating some of that to countries that deliver it,’ al-Falih said on Mpnday, prior to Trump’s tweet.

The administration has threatened close allies such as South Korea with sanctions if they don’t cut off Iranian imports by early November.

South Korea accounted for 14 percent of Iran’s oil exports last year, according to the US Energy Department.

China is the largest importer of Iranian oil with 24 percent, followed by India with 18 percent. Turkey stood at 9 percent and Italy at 7 percent.

The State Department has said it expects the ‘vast majority’ of countries will comply with the US request.