He is used to being out of step with other leaders, and perhaps he was caught up in the excitement of the occasion.

Donald Trump kept the Queen waiting for more than 10 minutes for the arrival of the black Range Rover used to transport him and his wife Melania to Windsor Castle.

And at one point Mr Trump appeared to breach royal protocol, marching in front of the Queen while they inspected the guard of honour.

The President looked out of step with the official choreography – causing the Queen to point tentatively and ask him to move to the left.

However, Mr Trump failed to pick up on the signal and instead came to an abrupt stop in front of her.

The Queen abandoned her efforts to get the President to move and simply shuffled around him.

Mr Trump continued to stand stock-still, staring at the Coldstream Guards – who were in their traditional bearskin hats despite the 27C (81F) heat. 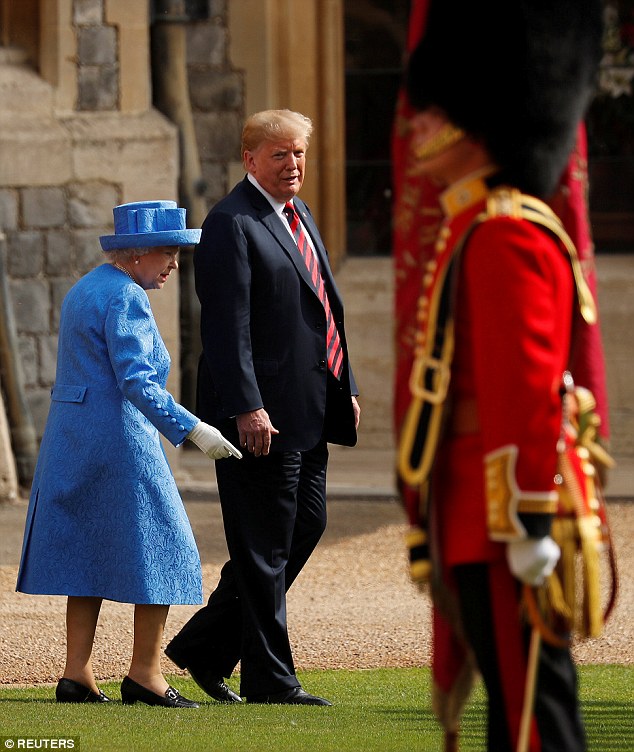 This way: They inspect the Coldstream Guards at Windsor Castle

Do get out of one’s way, Donald! The president blocks the Queen at Windsor Castle

So she carries on without him, as he appears to be transfixed by the spectacle Striding out in front of the Queen

Perhaps in deference to the Army’s second most senior regiment, Mr Trump appeared to be transfixed by their resplendent appearance and was rooted to the spot for several moments.

The Queen, who is used to inspecting her guards, appeared to leave him behind before she spurred him into movement again with a swift hand gesture.

His gaffes were slammed on social media, with Joanna Gasiorowska, Al Jazeera senior sports presenter tweeting, ‘I can’t even watch this… No bow or curtsey [sic] and now #Trump walks in front of the Queen… surely he knows the protocol but chooses to ignore it and that’s just b***** rude.’ Back in step: The Queen with US President Donald Trump