Washington: US President Donald Trump has said it is “an insult to the American public” for Democrats to consider impeaching Supreme Court Justice Brett Kavanaugh and claimed the allegations made against him were a hoax.

Trump lauded Kavanaugh as a “brilliant jurist” and blamed Democrats for the focus on decades-old allegations of sexual misconduct that dominated debate in the weeks before the nominee's Senate confirmation on Saturday.

“The way they really tortured him and his family, I thought it was a disgrace,” Trump said on Monday, US east coast time. “A brilliant jurist, a man that did nothing wrong, a man that was caught up in a hoax that was set up by the Democrats using the Democrats' lawyers, and now they want to impeach him.”

While liberal activists have called for the impeachment of Kavanaugh, many Democratic legislators have tried to tamp down such talk in recent days.

“I think that's premature,” Senator Christopher A. Coons, a member of the Senate judiciary committee, said on NBC's Meet the Press. “I think, frankly, we are just less than a month away from an election. Folks who feel very strongly one way or the other about the issues in front of us should get out and vote and participate.”

Among other things, Democrats have questioned Kavanaugh's truthfulness about his drinking while a teenager, an issue that came up repeatedly during a Senate hearing that included testimony from Kavanaugh and Christine Blasey Ford, who accused him of drunkenly assaulting her while they were in high school. 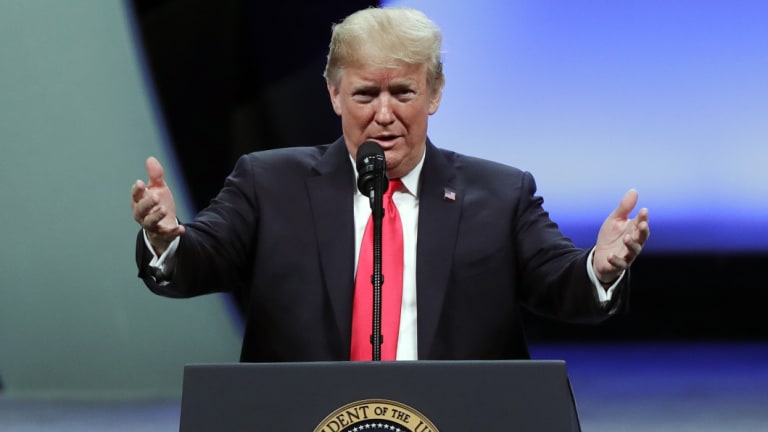 Donald Trump addresses the International Association of Chiefs of Police at their annual convention in Orlando on Monday.Credit:AP

Two other accusers stepped forward in the closing weeks of Kavanaugh's confirmation process to allege that he had behaved inappropriately with them while in high school and college.

“It was all made up, it was fabricated, and it was a disgrace,” Trump said of the allegations of one of Kavanaugh's other accusers.

Democrats have said that an FBI investigation into the allegations that Trump ordered was too limited in scope to be useful. Trump and Senate Republican leaders agreed to the FBI probe at the request of Republican senators whose support for Kavanaugh appeared to be wavering.

Trump predicted that Democrats would pay a price in the midterm elections.

“I think you're going to see a lot of things happen on November 6 that would not have happened before,” he said. “The American public has seen this charade.”