President Donald Trump is "doing very well" at Walter Reed National Medical Centre after being hospitalised there for coronavirus, his White House doctor said on Saturday.

"I feel like I could walk out of here today," Trump told doctors, according to White House physician Dr Sean Conley. 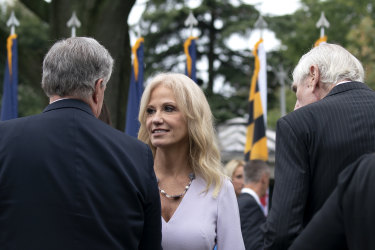 Kellyanne Conway, senior adviser to the US President, has also tested positive to COVID-19.Credit:

It's not known how or when Trump contracted coronavirus.

Several Republican lawmakers and GOP leaders who attended that event have since tested positive for the virus. 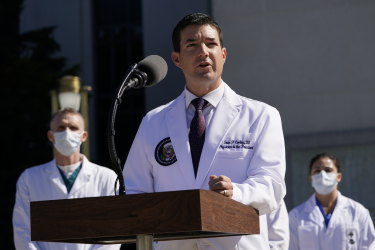 Trump later appeared at the first presidential debate with Democratic rival Joe Biden in Cleveland on Tuesday. Neither wore masks during the debate but were standing six feet apart.

Biden, who is 77, has so far tested negative for the illness.