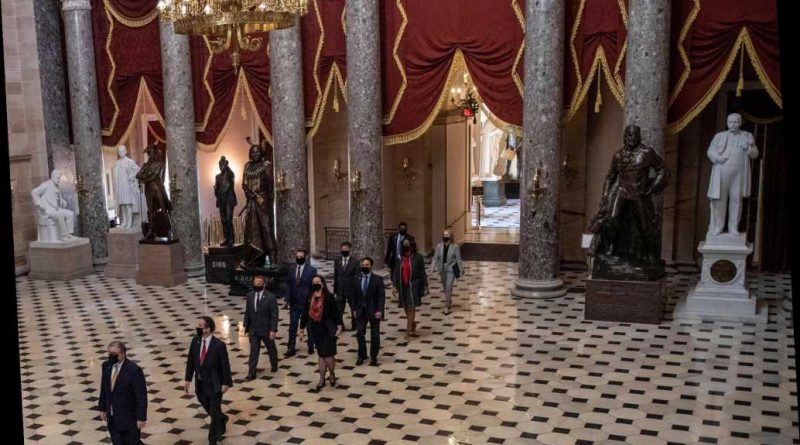 Trump impeachment trial: Schedule, time, and how to watch

House impeachment managers, led by Rep. Jamie Raskin (D-Md.), will go first. The team will have no more than eight hours on Wednesday to make their case for “incitement of insurrection,” per trial rules.

The rules allow each side 16 hours to present their arguments with an eight hour cap per day.

Once Raskin’s team has finished delivering their case, or run out the allotted 16 hours, Trump’s defense lawyers will have their turn to argue theirs.

Like on Tuesday, House managers plan to continue their use of video taken during the Capitol riots, which has served as a key element of their impeachment effort.

The House voted 232-197 to impeach Trump one week to the day after the siege.

Here’s what you need to know ahead of Wednesday’s proceedings:

The trial will be carried on all major TV news networks, and will also be available for streaming through C-Span, PBS and YouTube, beginning at 12 p.m. ET.

Leahy said the chief justice won’t preside because Trump is no longer president.

“The [Senate] president pro tempore has historically presided over Senate impeachment trials of non-presidents,” Leahy, 80, said in a statement.

Proceedings were originally going to take a pause from Friday evening through Saturday for Trump attorney David Schoen to observe the Jewish Sabbath. But in a last-minute schedule change, Schoen rescinded that request.

The trial is still not expected to go on past Sunday.

On Tuesday, the first day of proceedings, House impeachment managers debated Trump’s attorneys, David Schoen and Bruce Castor, on the constitutionality of the trial itself.

Castor spoke during his remarks before the Senate about the fall of ancient governments in Rome and Greece, barely addressing the case against the former president.

In a shocking admission, Castor also told senators, “We changed what we were going to do on account that we thought the House managers’ presentation was well done.”

The Trump defense lawyer also took aim at one of the senators whose vote of support he will need: Sen. Ben Sasse (R-Neb.) over his vote to call the impeachment trial constitutional.

“I saw he faced backlash back home because of a vote he made some weeks ago,” Castor said of Sasse.

He went on to say Sasse “faces the whirlwind even though he knows what the judiciary in his state thinks.”

His performance was panned by Democratic and GOP senators, leading one Republican, Sen. Bill Cassidy (R-La.) to change positions and vote to call the trial constitutional.

Addressing his colleague’s performance on Fox News Tuesday evening, Schoen defended Castor, saying that he was not expected to be present Wednesday and that he was sure “they will be very well prepared in the future and do a great job in the case.”

Where Democrats and Republicans stand

Democrats hold a slight edge in the 50-50 Senate by virtue of Vice President Kamala Harris’ tie-breaking vote, meaning they would need 17 Republicans to cross the aisle and vote to convict Trump, which appears less and less likely with time.

While Castor’s performance itself was panned in a bipartisan fashion, the attorney does not appear to be moving those senators in the former president’s camp toward convicting.

Sen. John Cornyn (R-Tx.), a member of GOP leadership, slammed the ex-commander-in-chief’s lawyer, saying, “I thought the President’s lawyer, the first lawyer, just rambled on and on and on and didn’t really address the constitutional argument.”

The top Senate Republican went on to call the performance “not one of the finest I’ve seen.”

Sen. Ted Cruz (R-Tx.), who has repeatedly spoken out against impeachment, acknowledged that he did not think Trump’s lawyers did “the most effective job.”

“I will say this: Jamie Raskin was impressive. He’s a serious lawyer,” he said.

Democrats remain almost completely united in their support for impeaching Trump, though it is not likely that 17 GOP members would vote to convict.

Asked whether he thought any Republican minds had been changed after Tuesday’s proceedings, Senate Minority Leader Chuck Schumer (D-NY) replied, “Ask them.”

The current commander-in-chief, for his part, has steered clear of the impeachment effort by other leaders in his party.

When asked whether he would be watching the proceedings on Monday, White House press secretary Jen Psaki told reporters, “The president himself would tell you that we keep him pretty busy, and he has a full schedule this week.

“I think it’s clear from the schedule and from his intention he will not spend too much time watching the proceeding, if any time.”

When asked directly about it outside the White House on Monday, President Biden declined to offer his stance, saying it should be left to the Senate to decide.

“Look, he got an offer to come testify. He decided not to. We will let the Senate work it out.”