Trump is mocked for saying Hurricane Florence is ‘one of the wettest we’ve seen, from the standpoint of water’ as North Carolina governor warns evacuees not to return home yet as the floodwaters are STILL rising

President Trump has been mocked after saying that Hurricane Florence was ‘one of the wettest we have seen from the standpoint of water’.

Trump made the remark in a video he posted to Twitter on Tuesday praising the authorities’ response to the storm, which he also called ‘a nasty one, a big one’.

Earlier in the day he took the opportunity to pat himself on the back, claiming ‘right now, everybody is saying what a great job we are doing with Hurricane Florence — and they are 100% correct.’

But he said: ‘At some point in the near future the Democrats will start ranting that FEMA, our Military, and our First Responders, who are all unbelievable, are a disaster and not doing a good job.

‘This will be a total lie, but that’s what they do, and everybody knows it!’

In his video message, which was issued around eight hours later, he added: ‘I just want to thank all of the incredible men and women who have done such a great job in helping with Florence.

‘This is a tough hurricane, one of the wettest we have seen from the standpoint of water. Rarely have we had an experince like it and it certainly is not good.

‘But the people of North Carolina, South Carolina, Virginia, all of the affected areas – you’ve been incredible.

‘There has been a loss of life and may God be with them and their families. That is a tough one, it is tough to understand, but this has been a really difficult time for a lot of people.

‘FEMA, the job you’ve done, the military, coastguard what you’ve done in saving so many lives has been really something special, law enforcement, always.

‘I just want to thank everybody for doing such a great job with a very difficult situation, Florence has been a nasty one, a big one, like that area has certainly never seen before.

‘The waters are still rising, listen to your state and local authorities, be patient, be alert, and God bless you.’ 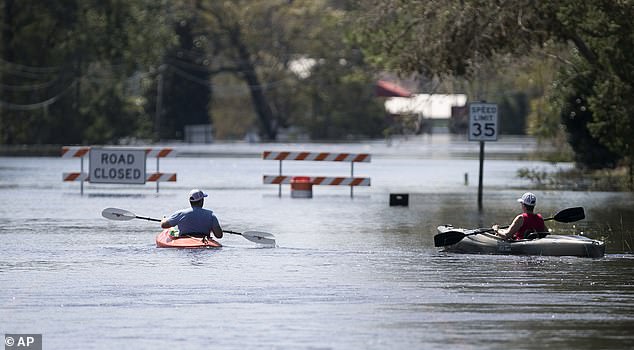 The President spoke out as North Carolina governor Roy Cooper urged evacuees not to return to their homes just yet because floodwaters could still rise (pictured, kayakers on the flooded Trent River in Nortrh Carolina) 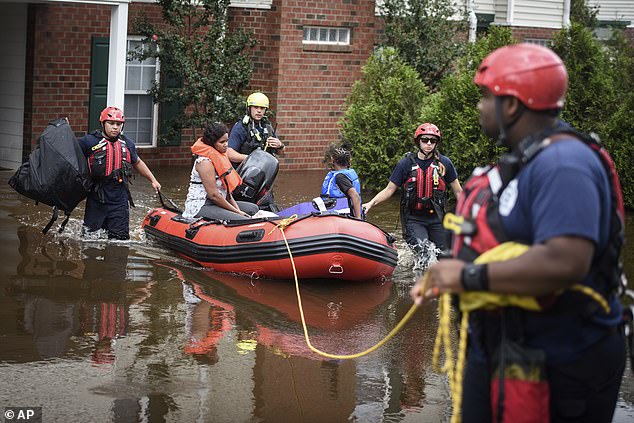 Rescue workers evacuate a family after Little River overflowed its banks and flooded part of an apartment complex in Spring Lake, North Carolina 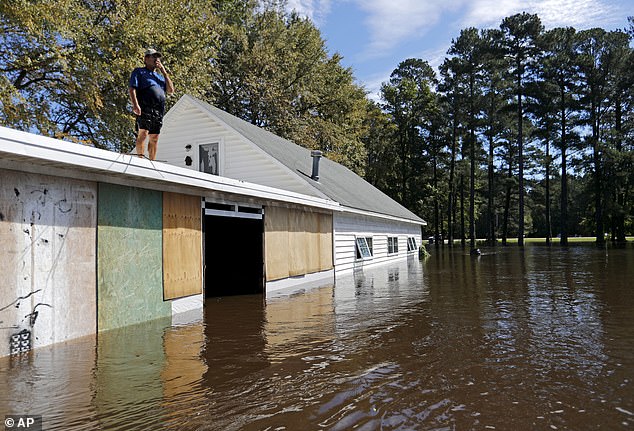 Kenny Babb looks out over the water on his flooded property as the Little River continues to rise in the aftermath of Hurricane Florence in Linden, North Carolina 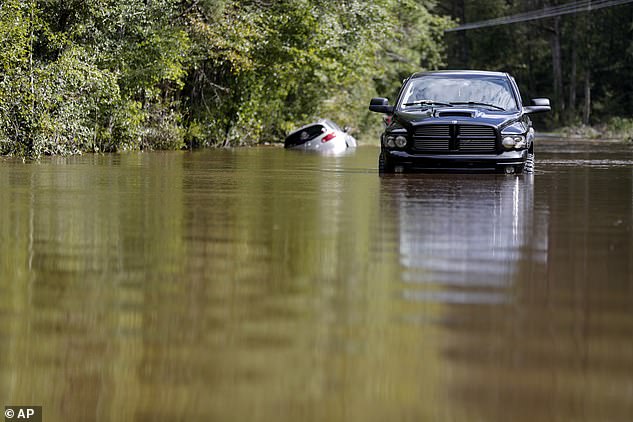 Cars sit abandoned on a flooded street in the aftermath of Hurricane Florence in Lillington, North Carolina 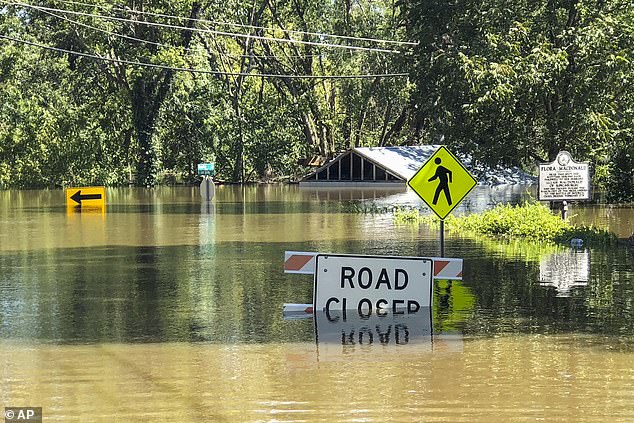 Trump spoke out as North Carolina governor Roy Cooper pleaded with evacuees not to return home yet as floodwaters could still rise.

Cooper also asked for patience from those housed in temporary shelters, often having to wait hours to collect necessities such as food and water.

‘I know it was hard to leave home, and it is even harder to wait and wonder whether you even have a home to go back to,’ he said.

Roads remain treacherous, he said, and some are still being closed for the first time as rivers swelled by torrential rains inland drain toward the Atlantic.

He spoke as the death toll rose to 37 across at least three states with 27 fatalities in North Carolina.

In South Carolina, two women died after a van was overtaken by rising flood waters near the Little Pee Dee River.

The women, detainees being transported to a mental health facility, drowned around 6 p.m. Tuesday when a van tried to cross a roadway and was overtaken by water.

Two other people were sent to a hospital for observation.

Drivers pulled up to a line of pallets, placed an order and left without having to get out. A woman blew a whistle each time drivers had to pull forward. 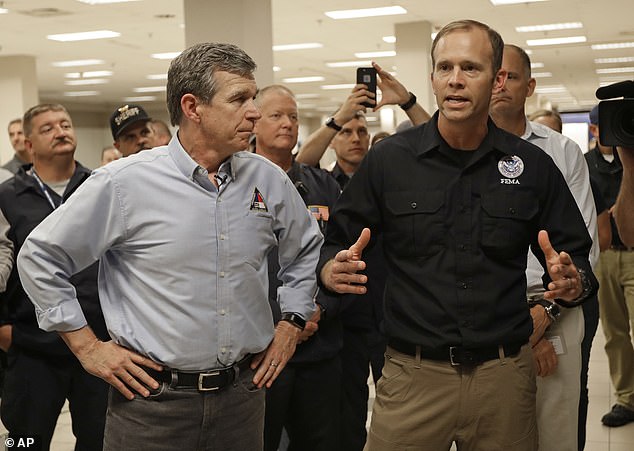 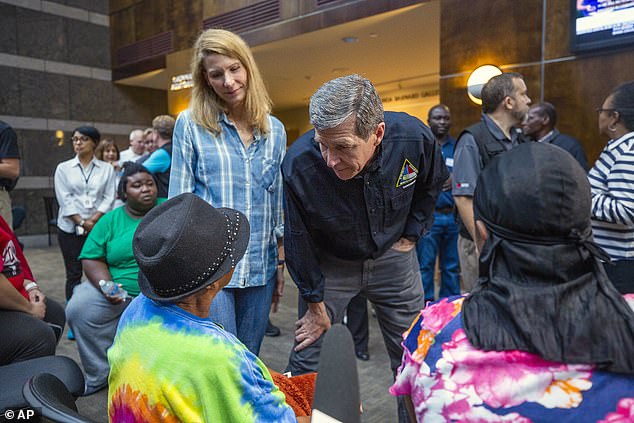 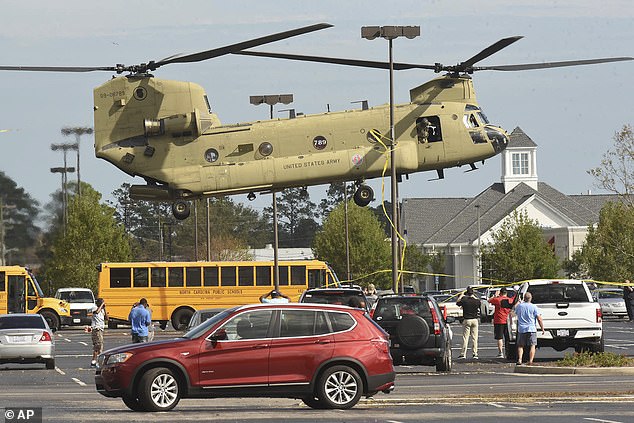 A National Guard Chinook helicopter lands in Wilmington, North Carolina, while bringing supplies to the victims of Hurricane Florence 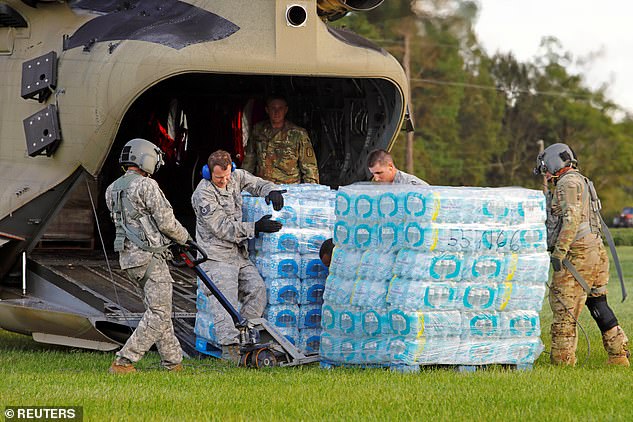 Todd Tremain needed tarps to cover up spots where Florence’s winds ripped shingles off his roof.

Others got a case of bottled water or military MREs, or field rations. An olive-drab military forklift moved around huge pallets loaded with supplies.

Brandon Echavarrieta struggled to stay composed as he described life post-Florence: no power for days, rotted meat in the freezer, no water or food and just one bath in a week.

Nearby, about 200 people lined up to buy 40-pound (18-kilogram) bags of ice as quickly as a Rose Ice and Coal Co. could produce it.

Supplies have been brought into the city by big military trucks and helicopters, which also were used to pluck hundreds of desperate people from homes and other structures.

Mayor Bill Saffo said two routes were now open into Wilmington, which had been completely cut off by floodwaters, but those roads could close again as water swells the Cape Fear River on the city’s west side.

At Fayetteville, about 100 miles (160 kilometers) inland, near the Army’s sprawling Fort Bragg, the Cape Fear River had risen about 50 feet (15 meters) toward a crest predicted to be more than 25 feet (7 meters) above flood level.

On Tuesday, logs and other debris became trapped under a rail bridge as rushing brown water pushed against the span.

The flooding got so bad that authorities closed a vehicle bridge in Fayetteville after the river began touching girders supporting the bridge’s top deck.

Fayetteville Mayor Mitch Colvin said it was unclear if the bridge was threatened.

‘We’ve never had it at those levels before so we don’t really know what the impact will be just yet,’ he said. 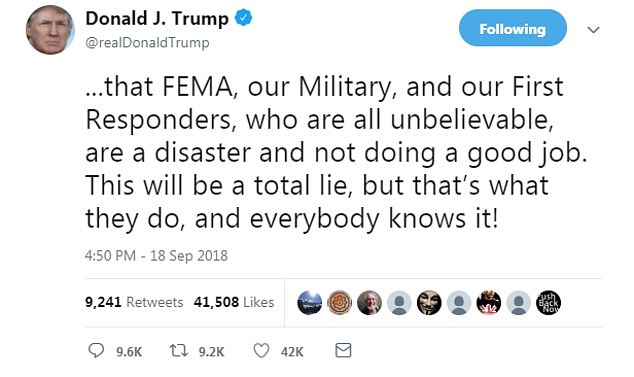 The President also congratulated himself on Twitter while preempting Democrat criticism, saying that it will be ‘a total lie’

The river swallowed trees, lamp posts and a parking lot near its banks.

City officials warned still-rising water threatened some neighborhoods and businesses that seemed safe, but said the worst was nearly over and life was beginning to return to normal downtown.

Businesses were re-opening and owners removed sandbags and plywood from storefronts.

Human and animal waste is mixing with the swirling floodwaters, which have killed about 1.7 million chickens on poultry farms.

More than 5 million gallons (18 million liters) of partially treated sewage spilled into the Cape Fear River after power went out at a treatment plant, officials said, and the earthen dam of a pond holding hog waste was breached, spilling its contents.

The governor said 16 rivers statewide were at major flood stage and more than 1,100 roads were closed. Emergency workers reported rescuing and evacuating more than 2,200 people and around 575 animals, he said.

In a bright spot, the Lumber River appeared to be falling in hard-hit Lumberton, about 70 miles (110 kilometers) inland.