Home » World News » Trump: ‘Nothing racist’ about criticism of Cummings and Baltimore

‘There is nothing racist’ about it: Trump defends his criticism of Elijah Cummings and Baltimore, claiming people already know the congressman is doing a ‘terrible job’

Donald Trump defended his recent criticism of Elijah Cummings and Baltimore, Maryland, which falls in the district the congressman represents, claiming there was ‘nothing racist’ about his comments.

‘There is nothing racist in stating plainly what most people already know, that Elijah Cummings has done a terrible job for the people of his district, and of Baltimore itself,’ Trump tweeted Sunday afternoon. ‘Dems always play the race card when they are unable to win with facts. Shame!’

In an earlier tweet Sunday morning, Trump also blasted Democrats for ‘playing the Race Card’ and making him out to be a racist for his digs at Cummings, who is black.

‘The Democrats always play the Race Card, when in fact they have done so little for our Nation’s great African American people,’ Trump posted to Twitter. ‘Now, lowest unemployment in U.S. history, and only getting better. Elijah Cummings has failed badly!’ 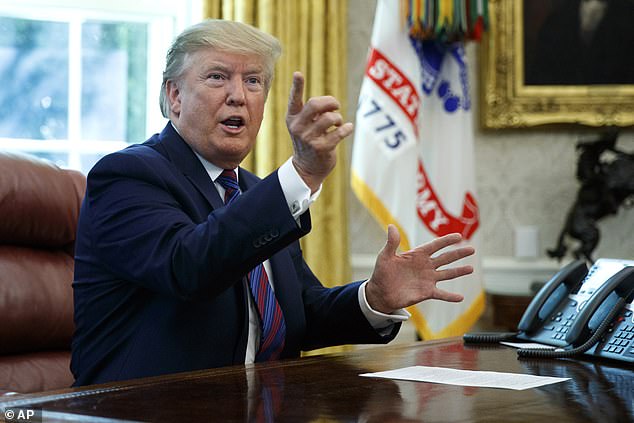 Donald Trump defended his criticism of Congressman Elijah Cummings and his district, claiming there was ‘nothing racist’ about him speaking the truth about the conditions in Baltimore, Maryland and how Cummings has dealt with it

In response to claims his comments were racist, Trump tweeted he was just ‘stating plainly what most people already know’ In another tweet following up on the initial attacks, Trump said the congressman should focus more on ‘fixing the mess’ in Baltimore instead of border issues and pursing impeachment.

‘If racist Elijah Cummings would focus more of his energy on helping the good people of his district, and Baltimore itself, perhaps progress could be made in fixing the mess that he has helped to create over many years of incompetent leadership. His radical ‘oversight’ is a joke!’ Trump tweeted.

Trump first launched his Twitter attack on Cummings on Saturday after the Oversight Committee chairman criticized conditions at the Southern border.

The outraged president defended the border detention centers as ‘clean, efficient and well run, just very crowded’, and then claimed the facilities are superior to Cummings’ own district in Maryland.

‘Why is so much money sent to the Elijah Cummings district when it is considered the worst run and most dangerous anywhere in the United States,’ Trump wondered in another tweet. ‘No human being would want to live there. Where is all this money going? How much is stolen? Investigate this corrupt mess immediately!’

Some insinuated Trump was taking a dig at Baltimore residents, who are more than 60 per cent black and African American, and suggesting they were not humans. 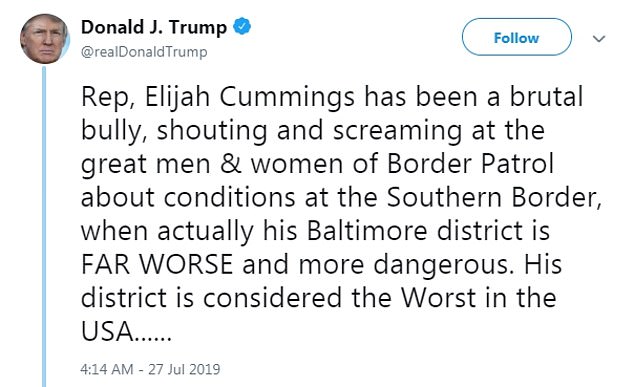 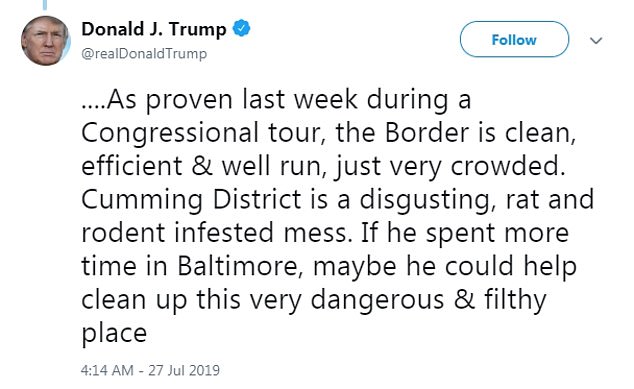 Trump said Cummings was a ‘bully’ to Customs and Border Patrol agents and claimed the situations at border facilities are better than in Baltimore, which Cummings represents in Congress 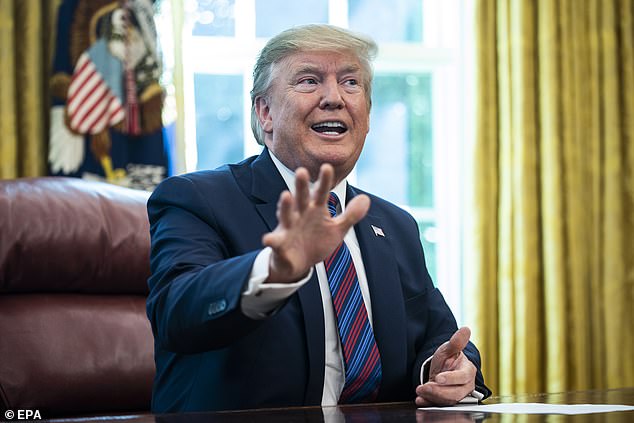 He claimed Baltimore is ‘disgusting’ and ‘rat and rodent infested.’ He also said no ‘human being’ would want to live there, which prompted many to say the tweets were racially motivated 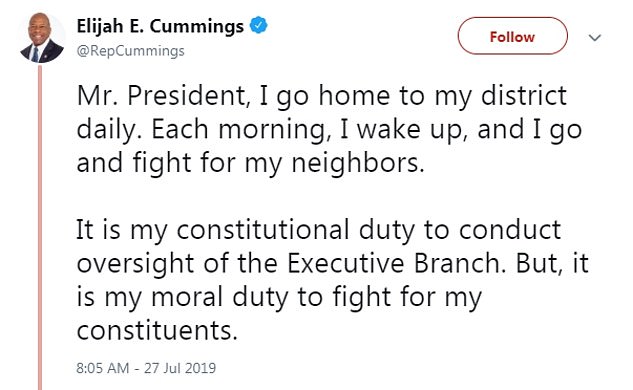 Cummings said he visits his home district every day – Baltimore is about an hour drive from Washington D.C.

Cummings responded to Trump’s insults saying, ‘Mr. President, I go home to my district daily. Each morning, I wake up, and I go and fight for my neighbors.’

‘It is my constitutional duty to conduct oversight of the Executive Branch. But, it is my moral duty to fight for my constituents,’ he added.

The Oversight Committee, which Cummings heads, is one of the House panels with continuing investigations that will determine whether it will recommend to the camber that it open an impeachment inquiry into the president.

House Speaker Nancy Pelosi, who was born in Baltimore and is the daughter of a former Baltimore Mayor, came to Cummings’ defense on Twitter Saturday.

‘@RepCummings is a champion in the Congress and the country for civil rights and economic justice, a beloved leader in Baltimore, and deeply valued colleague. We all reject racist attacks against him and support his steadfast leadership,’ she tweeted.

Trump took her tweet as a chance to criticize the congresswoman, her district and call her a racist. 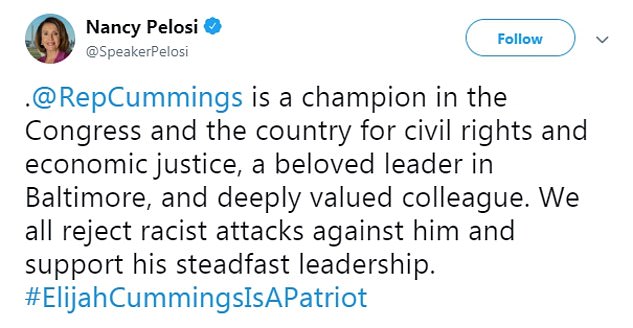 Nancy Pelosi defended Cummings on Twitter, claiming he is a ‘patriot’ and caling Trump’s attacks on him ‘racist’

Trump took her defense as an opportunity to attack the House Speaker and her district, which includes San Francisco 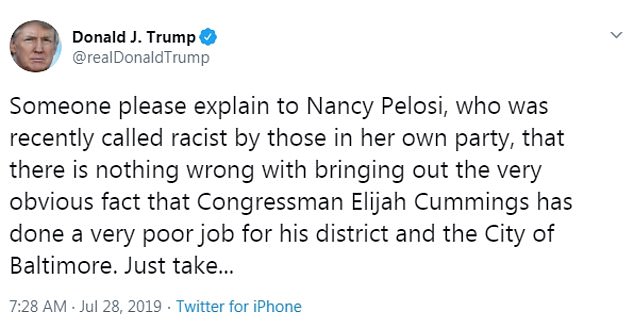 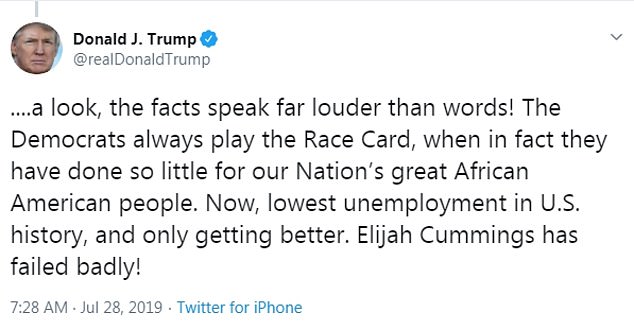 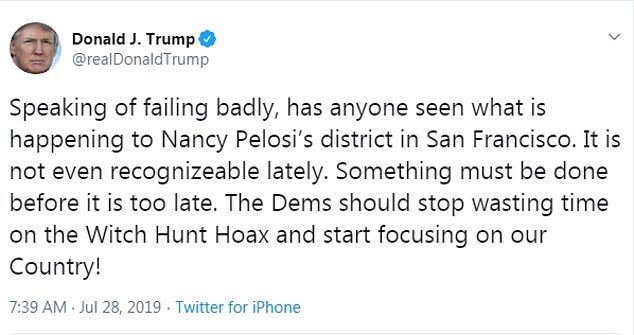 Trump fired back at Pelosi saying, ‘There is nothing wrong with bringing out the very obvious fact that Congressman Elijah Cummings has done a very poor job for his district and the City of Baltimore’

‘Someone please explain to Nancy Pelosi, who was recently called racist by those in her own party, that there is nothing wrong with bringing out the very obvious fact that Congressman Elijah Cummings has done a very poor job for his district and the City of Baltimore. Just take a look, facts speak far louder than words!’ Trump tweeted.

‘Speaking of failing badly, has anyone seen what is happening to Nancy Pelosi’s district in San Francisco,’ he queried. ‘It is not even recognizeable lately. Something must be done before it is too late. The Dems should stop wasting time on the Witch Hunt Hoax and start focusing on our Country!’

He was likely referencing San Francisco’s homelessness crisis that counted over 8,000 homeless people in the streets, according to a January tally.