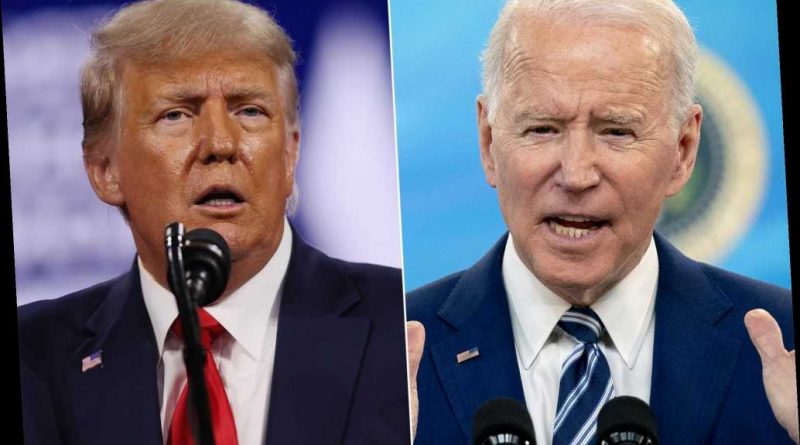 Former President Donald Trump on Wednesday slammed the Biden administration’s “globalist” multi-trillion infrastructure package, calling it a “monstrosity” that would be a disaster for American workers and send jobs overseas to China.

“Joe Biden’s cruel and heartless attack on the American Dream must never be allowed to become Federal law. Just like our southern border went from best to worst, and is now in shambles, our economy will be destroyed!,” Trump said about the president’s “Build Back Better” Plan in a statement.

“This legislation would be among the largest self-inflicted economic wounds in history. If this monstrosity is allowed to pass, the result will be more Americans out of work, more families shattered, more factories abandoned, more industries wrecked, and more Main Streets boarded up and closed down — just like it was before I took over the presidency 4 years ago,” the former president said.

Biden is scheduled to officially unveil the details of the first part of his jobs and infrastructure plan later Wednesday in Pittsburgh, where he launched his presidential bid from in 2019.

The second part of the package would be built around domestic policy.

The president will hike a number of taxes over the next 15 years to pay for the plan – including ones that could hit both companies and the middle class.

Trump singled out corporate tax increases in his statement.

“Biden’s policy would break the back of the American Worker with among the highest business tax rates in the developed world. Under Biden’s plan, if you create jobs in America, and hire American workers, you will pay MORE in taxes — but if you close down your factories in Ohio and Michigan, fire U.S. workers, and move all your production to Beijing and Shanghai, you will pay LESS,” Trump said.

Asked about the possibility of the tax hikes encouraging businesses to move much of their operations to foreign countries, a senior Biden administration official in a briefing Tuesday said the current “broken tax system” already is an incentive for companies to relocate.

“I would just say the facts strongly reinforce that since the 2017 tax cut, what we’ve seen is greater incentive to move profit and production overseas; that the principal impact of that tax bill, in addition to encouraging stock buybacks, was to actually make it easier and more attractive for companies to shift their profits and strip their profits out of the United States,” the official said, referring to Trump’s 2017 tax cut that reduced the corporate rate to 21 percent from 35 percent.

“And so the opportunity is to reform the corporate tax system in a way that would maintain our competitiveness and actually encourage domestic production in the United States,” the official said.

Trump called the tax increases a “globalist betrayal by Joe Biden and his friends.”