Home » World News » Trump says he asked Saudis about Khashoggi killing, claims they are angry about it

After repeatedly refusing to answer the question, President Donald Trump told reporters on Saturday that he did bring up the murder of a journalist in his meeting with Saudi Crown Prince Mohammad bin Salman, and he claimed the Saudi leader is concerned about it.

"He's very angry about it," Trump told reporters after his meeting. "He's very unhappy about it."

Earlier, as bin Salman sat across the table from him, Trump said the Crown Prince is doing a "spectacular job," and repeatedly refused to answer questions about the death of Washington Post journalist Jamal Khashoggi. 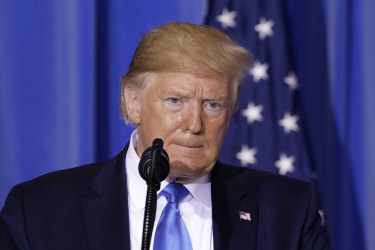 A week after a United Nations report implicated Bin Salman in Khashoggi's death, Trump said it was "a great honour" to meet the crown prince and stressed the business partnership between the US and Saudi Arabia.

Trump did not respond to repeated questions from reporters about the killing of Khashoggi.

Speaking with reporters later, Trump again refused to say whether he discussed Khashoggi with the Crown Prince. He did note that the Saudis are prosecuting people for the crime.

During their meeting, Trump and the Saudi prince did discuss US weapons sales to the kingdom as well as ideas on how to contain Iran and its threat to renew a program that could be used to make nuclear weapons.

Bin Salman, who will host the next G-20 summit in Saudi Arabia in November 2020, said he was looking forward to speaking with Trump.

Trump also talked about his invitation to North Korean leader Kim Jong Un to meet him on Sunday at the demilitarised zone between South and North Korea.

Trump has been criticised for not confronting the Saudis over Khashoggi's killing inside the Saudi consulate in Turkey last fall.

The Senate voted 53-45 last week to block the Trump administration from selling US-made weapons to Saudi Arabia and its allies, a rare rebuke of the White House by the Republican-led chamber — but the White House has threatened to veto that resolution should it reach Trump's desk.