Washington: President Donald Trump complained on Monday about the upcoming congressional testimony of former special counsel Robert Mueller, saying he "should not be given another bite at the apple" and asserting that it "will be bad for him and the phony Democrats".

Mueller is scheduled to appear publicly before two Democratic-led House panels on Wednesday to deliver highly anticipated testimony about his report on Russia interference in the 2016 presidential election and whether Trump sought to obstruct his investigation. 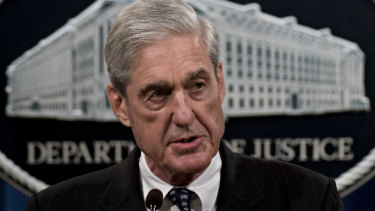 Robert Mueller spoke publicly for the first time in May about his special counsel investigation into Russian election interference.Credit:Bloomberg

The report did not find sufficient evidence to bring charges of criminal conspiracy with Russia against Trump or anyone associated with his campaign. It did not offer a conclusion on whether Trump obstructed justice.

Attorney-General William Barr later concluded that there was not sufficient evidence for obstruction of justice, but House Democrats are continuing to pursue that issue, with many pointing to episodes detailed in Mueller's report as grounds for impeachment.

House Republicans are also pledging tough questioning of Mueller when he testifies. Congressman Doug Collins, the top Republican on the House Judiciary Committee, said the American public is growing weary of the Russia investigation three months after the release of the 448-page report and that "any thought of impeachment is waning". He said Republicans will be focused on making clear that the report represents a "final episode" in the Russia probe, which he described as flawed.

"Remember, the Mueller report is a one-sided report," Collins said. "It has not been questioned from the other side. This is our chance to do that."

Both sides seemed to agree that Mueller's testimony could be pivotal in shifting public opinion on the question of "holding the president accountable".

"This is a president who has violated the law six ways from Sunday," said New York Congressman Jerrold Nadler, chairman of the Judiciary Committee. He argued that Mueller's report lays out "very substantial evidence" that Trump is guilty of "high crimes and misdemeanors", the constitutional standard for impeachment.

"We have to present – or let Mueller present – those facts to the American people … because the administration must be held accountable and no president can be above the law," Nadler said.

Trump has previously attacked Mueller, a registered Republican, as "highly conflicted", making several claims that have been disputed by people familiar with interactions between the two. 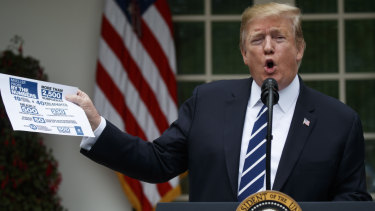 US President Donald Trump hit back after Mueller spoke publicly, giving an impromptu press conference about the Russia probe.Credit:AP

Trump, for example, has repeatedly alleged that he and Mueller had a business dispute that led to bad blood after the former FBI director resigned his membership at Trump National Golf Club in Sterling, Virginia. But the special counsel's report describes a far less contentious parting of ways than the President has described.

In October 2011, Mueller informed Trump's club that he and his family were cancelling their membership because they lived in Washington and were "unable to make full use of the Club". He then asked if they would be "entitled" to a refund of a portion of their initial membership fee, which was paid in 1994. The club responded that the Mueller family would be put on a list for a potential refund.

"The Muellers have not had further contact with the club," according to the report.

In his tweets on Monday, Trump also suggested that Republicans should use Wednesday's hearings before the Judiciary and Intelligence committees to ask Mueller about FBI actions during the investigation.

Trump said legislators should ask "why were the text messages of Peter S and his lover, Lisa Page, deleted and destroyed right after they left Mueller, and after we requested them(this is Illegal)?"

Trump was referring to FBI agent Peter Strzok, who played a major role in the early stages of the investigation into Russian interference, and FBI lawyer Lisa Page. The two had an affair and exchanged texts disparaging Trump.

A report made public in December said that the Justice Department's inspector general could not recover texts from the phones assigned to Strzok and Page for their work with Mueller because by the time investigators requested the devices, they had been reset in preparation for others to use them.

The report detailed glitches that complicated the inspector general's ability to recover and review messages exchanged during a five-month period ending the day Mueller was appointed.

But the inspector general wrote that there was "no evidence" that Strzok and Page "attempted to circumvent" the FBI's data-retention policies and that the "content of the text messages did not appear to be a factor" in whether and how they were retained.

The report also makes no mention of Mueller playing any role in the deletion of texts.

Strzok was removed from Mueller's team in July 2017 and ultimately fired from the FBI after the communications were discovered. Page separately left the team and later the bureau.

Trump said in May that said he would leave it to Barr to decide whether Mueller should testify. Barr initially said he had no objections to Mueller personally testifying, but earlier this month, he said he had changed his view.

"After I said that, [Mueller] indicated that he was not interested in testifying, and he held a press conference and issued a press statement making it clear that his testimony really was the report itself and that it wasn't going to go beyond the report," Barr told reporters.

He was "disappointed" Democrats had issued subpoenas to compel Mueller's testimony.

"It seems to me the only reason for doing that is to create some kind of public spectacle," he added.