Washington: US President Donald Trump's reluctance to concede the race to Joe Biden risks delaying the vital work of handing over the reins of government to the next administration.

Already, what started as a 78-day window for transition work between election day and the January 20 swearing-in ceremony has been shortened amid vote counts in battleground states. So far, it's just a modest trim – nothing like the 37 days that George W. Bush had to formally prepare for his presidency in 2000, after the Supreme Court's December 12 ruling in Bush v Gore. 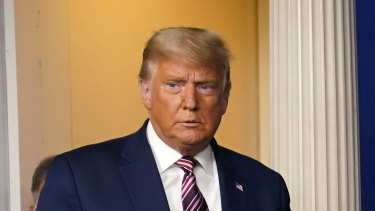 But Trump has signalled that it could get longer.

"The simple fact is this election is far from over," Trump said in a statement after Biden's victory was called by major news outlets on Saturday. "I will not rest until the American people have the honest vote count they deserve and that Democracy demands."

Under the 57-year-old Presidential Transition Act, the administrator of the General Services Administration – currently a Trump appointee – is empowered to formally ascertain the apparent winner. That allows transition teams to fan across the federal government, access expanded office space, start tapping in to $US6 million of funding and study detailed agency briefing books.

After networks and the Associated Press called the race for Biden on Saturday, the GSA confirmed it has not yet ascertained a winner. 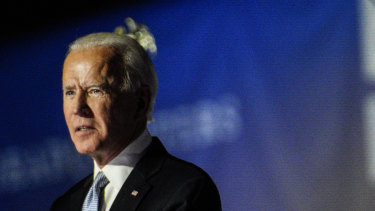 US President-elect Joe Biden speaks while delivering an address to the nation during an election event in Wilmington, Delaware.Credit:Bloomberg

Bush's handling of the truncated transition in 2000 could be a blueprint for Biden.

Bush even named his chief of staff before the election was decided, tapping Andy Card to help him vet potential cabinet-level nominees. Card said he and Bush were focused on "planning what kind of government he wanted".

While campaign officials were managing the recount, "we were focused on building a White House staff first and a cabinet second", Card said during a panel discussion last month. "The president-elect and I had a wonderful time kind of working under the radar screen, because most people were focused on what was happening in Florida."

Biden's decades of experience in Washington, D.C. could prove an asset, making up for lost time. His transition team is stacked with Washington veterans and former Obama administration officials who have already been closely tracking agency actions under President Donald Trump.

Still, any post-election acrimony could complicate a presidential transition now unfolding amid an economic crisis and a pandemic. The handoff could also be challenged by absences in agencies'

"The degree of difficulty of this transition is exponential, because of the fact that you have four crises simultaneously: a health crisis, an economic crisis, a political crisis and a social justice crisis," said David Marchick, director of the Centre for Presidential Transition, in an interview before the election. But the US has seen 223 years of peaceful transitions of power, even amid disputed elections, wars and depressions.

"It's one area of Washington that has worked pretty well," Marchick said, "because the stakes are so high, because continuity of government is so critical, and because a peaceful transition of power has been a bedrock principle in our democracy since Washington handed the keys to Adams.

The federal government has been preparing for a potential transition long before election day, as agencies assembled documents and prepared to hand over intelligence-gathering and policy making materials to a new administration. Before the election, the process was running smoothly, with all normal transition milestones under the law hit by the White House, federal agencies and the Biden team, Marchick said.

Since May, career officials in every federal agency have been developing transition plans and assembling briefing books to hand over to an incoming administration. A White House coordinating committee was established in September to facilitate similar work. The Justice Department also has been processing security clearances for key Biden officials – an early start meant to ensure that critical staffers have access to intelligence and there are no gaps that could be exploited by adversaries.